Knot My Sister's Keeper (A Quilting Mystery) by Mary Marks 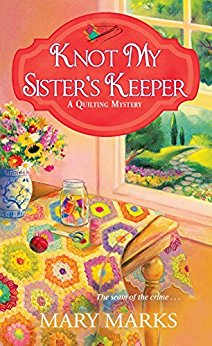 In tracing her ancestry, quilter Martha Rose discovers a ritzy half-sister, a stash of family secrets, and a decades-old mystery that only she can unravel . . . Martha Rose is shocked to find she has a half-sister, especially one so different from her. Giselle Cole is wealthy, widowed, and lives a glamorous life in West Los Angeles. At least her grandmother was a quilter! But Giselle can’t answer Martha’s many questions about their father—he disappeared when she was only a child and the few clues left behind indicate he may have been murdered. So Martha and Giselle team up on an investigation that weaves them through the streets of L.A., their father’s hidden love affairs, and into some mysterious unfinished Cole family business . . .

Knot My Sister's Keeper by Mary Marks
My rating: 4 of 5 stars

Knot My Sister’s Keeper is a different book than the rest of them in the Quilting Mystery series. This book is very personal to Martha. After submitting her DNA through an ancestry database, Martha learns that she has a sibling, a half-sister named Giselle Cole. The exact opposite of Martha, Giselle is rich, glamorous, and tactless. What they do have in common is the want of family and to know why their father disappeared without a trace so many years ago. An up-and-coming artist, their father disappeared at the high of his career, never to be heard from or seen again.

The emotional content in this book is heightened due to the personal nature of the situation. Thinking she had limited family members, Martha can’t believe that she has a half-sister. When the gravity of the situation surrounding their father comes to light, the new-found sisters know they have to try and find him. This entire book was an emotional rollercoaster. I liked the unique spin of this book compared to the rest of the books in this series.

Martha Rose is the typical heroine - totally not a crime solver/fighter but makes it her duty to dive in head first whether there's water in the pool or not. Martha Rose puts herself into vary precarious situations and breaks a lot of laws in her quest to find the killer. During downtime in the quest to find their father, Martha still holds the quilting sessions that now include others besides Lucy and Birdie. Giselle, even though she is thoughtless in the things she says does take an active interest in Martha and Crusher’s Jewish customs and traditions, bringing the two sisters that much closer together. The relationship between Martha and Crusher is sweet and I’m honestly glad she is with him. He is so devoted to Martha and she to Crusher.

Mary Marks does another wonderful job building up the mystery and keeping everything a secret. The truth of the situation is revealed at the perfect time and the person responsible is not the person I thought it would be. The writing flows well and is concise. The author's writing style is fluid and smooth and so easy to get lost in. The romantic elements of Knot My Sister's Keeper are subtle and don't overshadow the mystery. The entire novel is engaging; never a dull moment.