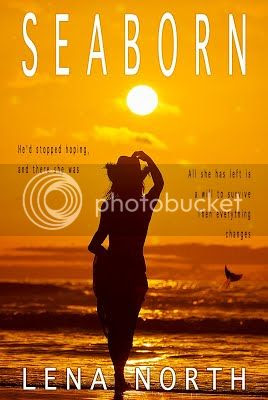 Charlie runs for her life, bruised and bleeding after yet another visit from her former boyfriend. The only one she can turn to is a colleague, and Carrie sends Charlie to her parents on the Islands, a safe haven where she can rest and heal.

Prepared to leave, things take an unexpected turn when Charlie finds out about the legacy some of the families on the Islands share, and how she has links to it.

Joao is about to propose to his girlfriend when his uncle calls to ask for help, and he arrives at his uncle Nico and aunt Pauline’s house to find an abused girl. As the Chief of Police and protector of the Islands, he’s used to handling situations like this, but then the girl opens her eyes and his world shifts. The turquoise gaze is a clear indication that the girl comes from the Islands, but it also cuts straight to his soul.

Charlie and Joao grow close as she adjusts to her new life, but then their lives are turned around yet again, and this time, there might not be a way back to who they were becoming together.

Seaborn is loosely linked to the Birds of a Feather series where Joao played a part in book #4, Black Snow. The story takes place after the series ends, but it is not a continuation and can be read standalone. 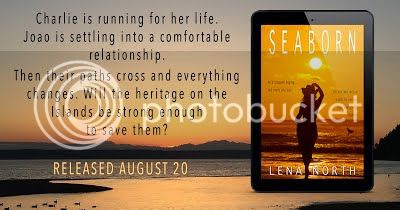 There wasn’t any other way. I’d have to trust Carrie. We’d worked on the same team for two years and weren’t friends outside the office because I couldn’t have close friends. I’d tried but he drove them off, by being rude to them until they gave up, or telling me what would happen to them if I didn’t pull back, so I stopped calling and eventually, they did too. But Carrie and I were co-workers who talked every day, so in a way, we were friends after all. And Carrie knew who my former boyfriend was, and what he was capable of.

“Okay,” I whispered. “I’ll hold on to the phone for ten more minutes, then I’ll leave it behind.”

I closed the call without saying goodbye and started walking. Everything hurt, but now I had a plan, and that gave me the strength to keep moving, step after agonizing step. I’d pulled the hood up to cover my face and used the arm to wipe off blood as I walked, hoping the dark blue color would hide the stains. The phone was in my hand, and I answered before the first silent buzz had come to an end.

“Benito is waiting for you. Side door, west of the building.”

“Side door, west of the building,” I echoed. “Carrie?”

I could hear how Carrie sniffled but didn’t know what to say to assure her everything would be okay. It wasn’t okay, and I wasn’t sure it ever would be.

“Carrie?” I rasped out, finally.

“In my real life, the one I had before him… I wasn’t Lottie then. I had a real life once, and everyone called me Charlie.”

A sob came through the phone, and a quiet, “Oh, sweetie.”

Then I closed the call and started the long, painful walk toward my escape. I stopped outside a convenience store to put the phone in the back of a pick-up, hoping the owners wouldn’t get hurt if someone were tracing the signal.

When I reached the airport terminal, my head was spinning, and it felt as if I was stumbling along in a strange bubble where all sounds were warped, and the only emotion available was a dull, thumping pain.

“Side door, west of the building,” I repeated as a mantra, placing one foot in front of the other until I walked straight into a man.

I tried to smile and used the sleeve of her hoodie to wipe away sweat and blood from eyes which were swollen almost completely shut.

“Jesus,” he repeated and reached for me.

He led me around the building, through a gate, and over the tarmac. When I was sitting in one of the passenger seats, he tilted the chair all the way back and wrapped a blanket gently around me.

There was no way I’d relax, not as long as he could find me, but it was nice to take the weight off my aching foot and close the small slits that were my eyes. Then the engines roared, the plane started moving, and finally – we were in the air.

Silently, hot tears started running across my temples and into my dirty and blood-streaked hair. Two minutes later, I slept.

The proper way to put it here would probably be to describe how I love to play with our two big dogs, adore my fantastic daughters and how much I love to read.

Another way would be to use my imagination and then I would be a super powerful warrior woman, think Xena the warrior princess (though with less tacky clothes). Or when I think of it, maybe I’m actually more of a Hercule Poirot (sans the suit and moustache). Or maybe I’m like Aragorn, strong and cool and then I might get to meet Gandalf! Or I could be Bella’s pretty cousin and snap Jacob up in a second (yeah, I’m so not team Edward), or wait, maybe I could be like one of them  heroines in historical novels who swoon all the time. I’ve always wanted to swoon…

Well, I guess you get how my mind is working (or not working, some say).

Anyways, I like to write. Stories, adventures, romantic and happy stuff mixed up with sorrow and hardship, and bit of laughter here and there because the way I see it – life is way too short to go around feeling grumpy.