There’s only one archangel who can save Anya’s life. And she’ll have to turn to outcast high demon Dommiel in order to find him. Things are about to get complicated… 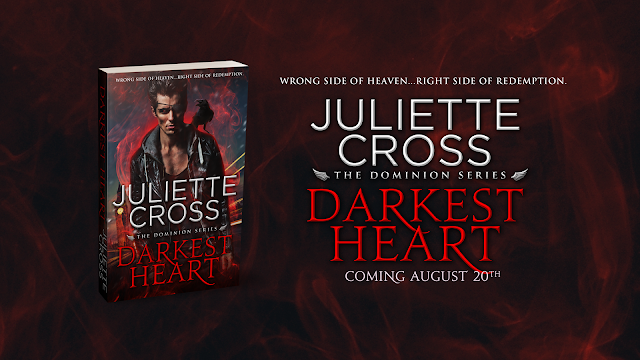 Anya—a stoic, blue-winged angelic warrior—was bitten by a demon prince in battle, and now she has precious little time to find a cure for his deadly venom. But the only archangel with the power to stop the dark poison from corrupting her body and soul is missing. She’ll have to trust her guide, the outcast high demon Dommiel, who is as handsome as he is dangerous if she has any hope.

An outcast of his own kind, high demon Dommiel stays under cover while the war between angels and demons rages on. When the only person who ever showed him kindness asks for his help, he has no choice but to try to save the angel. Venturing back into the dens he has avoided for so long, Anya makes him want and feel things he never thought possible. 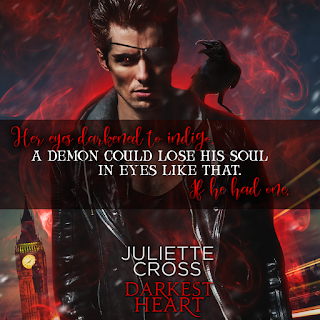 I glanced up the street. Six cloaked figures strode in our direction, the mist curling around their billowing capes. High demons on the prowl with malicious intent. They moved as if they had a specific destination. But they’d derail plans in a heartbeat to pluck a pretty angel apart.
“Well, it’s worth a try.” Anya started toward the bridge.
Instinct gripped me hard. I stepped in front of her, covered her mouth with my hand, and pushed her back into a niche against the wall.
“Tighten your wings,” I commanded in a low whisper.
She did, making it easier to flatten them against the alcove wall behind her. I pressed my body hard against hers, minimizing our presence.
“Don’t make a sound.” I emphasized with force. “Not a whimper.”
Her violet-blue eyes widened, but she only nodded. I covered as much of her as I could, pressing my chest to hers, then cast illusion to hide her wings with a snapping summons of my power. She didn’t see the demons coming, and I had to hide her wings quickly. The shock of my dark touch, my invisible armor wrapping her in a hard grip, had her lips parting in a silent gasp. Our breath mingled in the frosty air as the gang of demons drew closer. They’d sense us and see us. I counted on my instincts being right. That they’d bypass a pair of lovers in the shadows. But if they’d seen her wings, they’d stop for a bit of sport with her.
Like I’d fucking let that happen.
“Play along,” I commanded again, hearing the grating dominance in my voice and expecting her to push me off.
Combing my hand into her hair, I reveled in the feel of the silky strands sliding over my skin before I gripped that black silk in a fist and leaned forward. A force not my own pulling me closer. Her eyes remained wide, her body stiff. But not as stiff as mine. Hell, I’d had a hard-on from the first moment she arched a defiant brow at me.
The need to get my mouth on hers drove me like a bullet train. I needed to know what she tasted like. Needed to feel the slide of my tongue past those full pink lips. Needed to get inside of her. But she wasn’t ready for me. Not yet. She was hard to read, my angel. But we could play pretend lovers for a minute.
Gripping her hip with my mechanical hand, I pressed harder against her body. My cock, like an iron rod, pushed against her pelvis. She flinched in my arms and stiffened but didn’t pull away. No. She softened, for fuck’s sake. And that was my undoing. I tilted my mouth toward her neck, breathing her in.
I sensed the sinister air surrounding the demons drawing closer, but I refused to give in to the urge to turn and draw a blade. The menace rolling off of them claimed they were not a group to overpower or escape quickly. If worse came to worse, I’d just sift us away. But something told me they were on the move. Better prey in mind. As long as they thought us harmless lovers, we were safe.
So I focused on Anya. Her grip on the lapels of my leather jacket tightened while her body melted against me. Pure, fucking heaven.
I grazed my lips against her soft throat, featherlight. Her desire—an innocent, fragile thing—flared hot when she let out a little moan. Christ. I was going to lose my mind.
I sensed the demons passing behind us. That danger drifted away but another kind took its place. Uncontainable lust had me in its iron grip. Unable to taste just a little, I flicked my tongue over the lobe of her ear. She flinched again, exhaling a breathy moan before she clamped her mouth shut.
Curling my hand into the collar of her leather jacket, I pulled it aside so I could taste her where her neck met shoulder. The soft patch of exposed pale skin lured me like a dying man in the desert to the coolest drink of water.
Fuck, the things I wanted to do to her. Dirty, dark, delicious things.
Her innocence was a beacon, a red flag waving in the breeze, and my bull wanted to charge. Right fucking now.
Feeling my control slipping, I scraped my teeth gently up the side of her neck, my beast jerking on the leash I was strangling him with.
I eased my lips off her skin, a new addiction that would surely cripple me, because that wasn’t nearly enough. A slight sound of protest escaped her lips. I lifted my gaze to hers.
“Not a whimper,” I said.
The urge to bind her and force every possible sound of pleasure from those luscious lips pushed me like a primal compulsion. A vibrating need I never saw coming threatened to choke the air from my lungs.
Her eyes—dilated with lust—trailed down to my mouth.
“Dommiel. Your teeth.” Her panting breath curled out in white puffs. “And your eye.”
That’s when I realized my beast had come to the surface. The monster I kept at bay so as not to frighten mere mortals. And sweet angels. He wanted to play. He wanted more.
Flicking my tongue over one canine, I backed up, removing my body from the achingly sweet alignment against hers. It would take a few minutes to simmer my blood, for my canines to recede. I turned away, facing the direction those night prowlers had gone, heaving in a deep breath of cold night air. I needed a dip in the Arctic to get my brain and my dick off the gut-punching pleasure one little taste of her had given me.


Add to Your Shelf on Goodreads 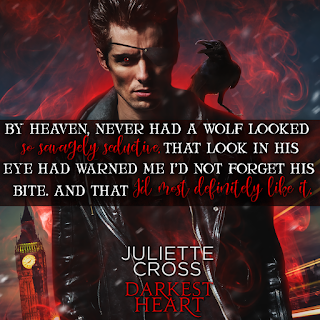 Juliette lives in lush, moss-laden Louisiana where she lives with her husband, four kids, and black lab, Kona.

From the moment she read JANE EYRE as a teenager, she fell in love with the Gothic romance. Even then, she not only longed to read more novels set in Gothic worlds, she wanted to create her own.