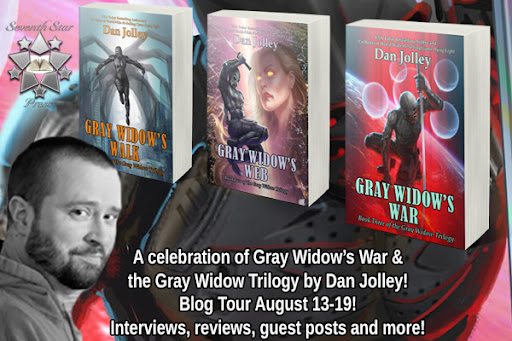 The final installment in USA Today Bestselling Author Dan Jolley’s Gray Widow Trilogy, Gray Widow’s War, is featured in a new blog tour set to take place August 13-19. Featuring a great heroine in Janey Sinclair, the Gray Widow, the series is action-packed and appeals to readers of many genres. With aliens and genetic mutations in the series, the Gray Widow Trilogy encompasses science fiction, urban fantasy and superhero fiction. The covers for this series were done by Dark Horse Comics artist John Nadeau.

Please welcome Dan Jolley to the Blog Today with a Top Tens List:

I first became aware of the original Resident Evil back in college. A friend of mine had been playing it, and brought it over to my apartment, telling me I had to try it out. The first thing that struck me, to no one’s surprise, was the now-infamous, spectacularly awful dialogue, but once I gave the game a chance, I realized how engaging the actual gameplay was. When RE 2 came out, not only did it have equally engaging gameplay, but the dialogue and story were also leaps and bounds ahead of the first one. I was hooked.

I had never seen a game like Fatal Frame when it came out. I played as a Japanese girl? Okay… and instead of a gun, or a sword, I’ve got a camera? Fine. And I’m supposed to take photos of ghosts? Huh. Let’s see how this goes. Well, it went spectacularly. The game was a veritable how-to course on establishing mood and atmosphere. Sometimes I still get a chill when I remember the sound of the mournful blinded ghost wailing, “My eyes…”

This one took everything I already loved about the RE franchise and polished it to a gleaming shine. Loved the story, loved the gameplay, and for the first time I felt a genuine sense of menace and horror from some of the adversaries. The women with the skirts and the bandaged faces and the freaking chainsaws? The stuff of nightmares! I also loved the actual Spanish some of the bad guys spoke. “Morir es vivir…” To die is to live. Super-creepy. (Plus, once I unlocked the Mercenaries mini-game, I think I spent more time playing that than I did the main game.)

By now you’ve probably noticed a theme in my game choices: I don’t go in much, or at all, for multi-player. I much prefer the kinds of games that let me wander around, figuring stuff out at my own pace (and often thinking to myself, “Now how do I get up there…?”) Silent Hill took everything I loved about Resident Evil, gave it an upgrade, and elevated the creepy factor by about 10. The second one had better graphics, smoother gameplay, and lost the punishing between-screens load times of the first game, but the thing about the first game that had me in awe was the siren-heralded transition between the real world and the rusted, corroded nightmare world. BRILLIANT. I wish they’d kept that.

Confession time: I had never played a Witcher game before picking up the third one. I was afraid I’d be totally lost as far as the game lore, but it did an admirable job of remaining accessible. All I felt was that the main character had already met a lot of the NPCs before, and that they had substantial history, which was fine. It let me enjoy the smooth, satisfying gameplay without any undue distractions, and I really appreciated the vast, open-world nature of it. (Also, as far as this game goes, it’s redheads over brunettes all day long for me.)

These two perfectly embody the kind of game I enjoy most. I get to do things at my own speed, I can tackle obstacles the way I prefer, and the writing and acting are top-notch. I think the conventional wisdom is that 3 edges out 4 in general popularity, largely because of the supremely memorable villain Vaas Montenegro, but I can’t decide which I like better. Vaas *was* great, but I think I connected with the protagonist’s story a little better in 4. Heck, now I want to go play them both again.

Where to begin with this? A world the likes of which I had never seen before… a badass yet believable female protagonist (which, if you’ve read any of my own writings, you know I love)… a story with a level of richness and detail that I don’t think I had encountered before. Plus, Lance Reddick should be in everything. H:ZD was great, top to bottom. The only reason this doesn’t occupy one of my top spots is that a couple of elements were so hard for me to figure out that I wound up consulting online forums to find them. (I’m looking at you, Shield-Weaver Armor.) I still give the game a nine out of ten, and can’t wait for a sequel.

There’s about a seven-year gap in my video game experience, thanks to World of Warcraft. When I got my first job writing for a video game, my boss asked me if I’d played any of the online games such as WoW. I said I hadn’t, because I had always feared it would take over my life. He suggested that I play WoW for “ten or twelve hours, just to get a feel for it.” Well, seven years later, I had multiple maxed-out characters over multiple servers, and had gotten so deep into it that I wound up writing some of the WoW manga stories for TokyoPop. But I never was much of a joiner, and I detested the thought of raiding, so the game eventually just sort of moved past me. I still get the occasional urge to log on as my Tauren Shaman and blast the crap out of a bunch of stuff, though.

I know this will come off as blatant self-promotion, since I wrote about 95% of Dying Light’s main story, but I’m actually not talking about the writing with this one. The team at Techland pulled off something extraordinary with DL’s gameplay. They managed to make “parkour vs. zombies” into a seamless, compelling, believable, and most of all FUN experience. Charging at full speed across rooftops, running along walls, dropping onto a zombie from a great height for a one-hit kill… all of it came together perfectly.

What can I say about Skyrim that hasn’t already been said by thousands and thousands of other fans? For my money, it’s basically the perfect game. The vast array of choices in character creation and in leveling up, the brilliant game mechanics, the acting, just…everything about it makes it my favorite game ever. Okay, so it’s not *perfect*. There are flaws—from too-often-repeated NPC dialogue to the occasional woolly mammoth dropping from the sky. But it’s fun, engaging, and makes me feel like some kind of mythical superhero. So it may not be perfect, but it’s perfect for me. No question.

**Fun Sapphyria Fact**
The name Sapphyria is actually the name of my very first World of Warcraft player, created about 10 years ago. She is a Paladin Hunter and I still play her from time-to-time. When I decided I wanted to be a book blogger/reviewer I wanted a blog name that was distinctive and different. My husband suggested Sapphyria, after my WoW character, and the rest is history. 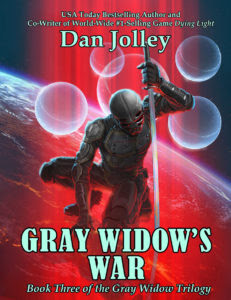 When Janey Sinclair vowed to use her ability to teleport from shadow to shadow to protect the city of Atlanta, she only wanted to spare others the kind of agony she’d endured herself. To prove that not all suffering is necessary. To heal the splinter-edged rifts in her own heart. But soon Janey realized she was part of something much larger. Something that spanned the globe… And reached beyond it. The forces behind Janey’s Augmentation—the authors of the grand experiment striving to use human DNA as raw material in a vast intergalactic conflict—have arrived on Earth. And if the planet is to survive, Janey Sinclair must unite friends and foes alike. Humanity itself hangs in the balance, as Janey wages the GRAY WIDOW’S WAR Gray Widow’s War is book three of the Gray Widow Trilogy. 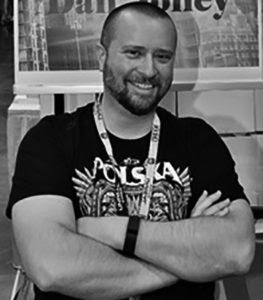 Dan Jolley began writing professionally at age 19. Starting out in comic books, Dan has worked for major publishers such as DC (Firestorm), Marvel (Dr. Strange), Dark Horse (Aliens), and Image (G.I. Joe), and soon branched out into licensed-property novels (Star Trek), film novelizations (Iron Man), and original novels, including the Middle Grade Urban Fantasy series Five Elements and the Urban Sci-Fi Gray Widow Trilogy. Dan began writing for video games in 2007, and has contributed storylines, characters, and dialogue to titles such as Transformers: War for Cybertron, Prototype 2, and Dying Light, among others. Dan lives with his wife Tracy and a handful of largely inert felines in northwest Georgia, and enjoys connecting with readers via his website (www.danjolley.com) and on Twitter (@_DanJolley).