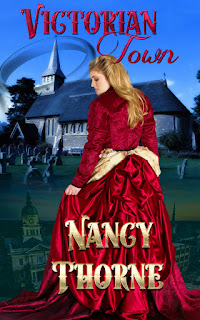 Tagline: Abby Parker has a modern life. Too bad someone in the 19th century needs it.

Abby Parker planned out her whole life: complete her final year of high school, go to college, get a job, move away from her insane family, stay best friends with Jessica.

But, that was before she broke into the nearby tourist attraction and unwittingly answered a call from a centuries-old spirit who dragged her into the 19th century.

Now she must solve a Victorian mystery without getting herself killed, or worse, spend a lifetime trapped in the past, leaving behind everyone she loves and altering their lives forever.

When she meets gorgeous Benjamin, the future looks a lot like wreckage.

I waited for him to make the next move, to tell me how inappropriate, how forward that was of me. As I struggled to think of how best to offer an explanation, he turned to me. Gently but deliberately, he moved his hand up my arm, stopping at the nape of my neck beneath the ribbon of the bonnet.
The moment he leaned in, I closed my eyes. His lips, soft and full, touched mine with the modest pressure of an indecisive act. A warm energy coursed through my body, but the strangest thing was that everything felt unbelievably familiar, like it had all been rehearsed before that moment. I held onto this profound feeling, not wanting it to leave, until Ben removed his lips from mine.
Even with the whistled melodies from a pair of cardinals outside the church's entrance, the following silence felt awkward. It persisted, and I assumed Ben was already regretting kissing me.
"Miss Abigail−"
I brought up a hand and covered his mouth. "It's okay."
We walked down the hill without saying another word. A lot of activity was happening on Main Street: coaches lined the front of the Royal Hotel as travelers zipped in and out of the main entrance; horse carts delivered goods in dashes of haste; store merchants hurried beyond their open doors; street sellers sold goods out of baskets; helpers swept the boardwalk; ladies could be seen purchasing last minute necessities behind the windows of each shop.
Ben accompanied me up the stairs of Town Hall's entrance and stopped on the landing before we reached the front door. I peered through the window. Martha arranged long-stemmed flowers in a vase on a table at the side of the ballroom. A young man placed a candelabra on a table and then another on top of a piano. Ben had already started back to the street when I turned. He waved. I waved back. Still a chance he'll change his mind.
The gloves were easier to remove now that one was missing its button. I placed them, and the button, on the ledge of the window and took off the ring.
Jess was still sitting on my bed when the haze cleared, but her tapping fingers had moved from her chin, which now rested on her knuckles. It was obvious it had taken longer for me to return this time. It made sense to me right then that the ring held within it a finite amount of energy with which to transport me to the past and back home, like a battery depleting its energy with each use. And, I had no idea how to recharge it. 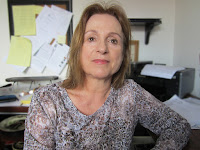 Nancy Thorne is an award-winning author of fiction inspired by the romance and courage of youth.

Born and raised in a suburb of Toronto, she fostered a passion for creating stories in grade school but hid it much too well. Five years ago she decided to pursue her lifelong dream of telling them.

When she's not writing books or reading, you can find her going on road trips or cooking untested recipes for brave family members and friends.

Nancy lives outside of Toronto with her husband, two sons, and an energetic fox-red Labrador.

She loves to hear from her readers, even just to say hi. Find her online at www.nancythorne.com 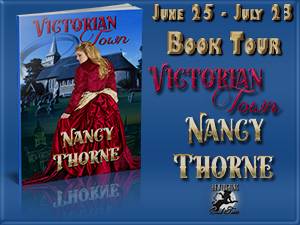