This post is part of a virtual book tour organized by Goddess Fish Promotions. One randomly drawn commenter via Rafflecopter will receive $15 in Boroughs Bucks. Click on the tour banner to see the other stops on the tour.

Boroughs Publishing Group can't wait to give you a Xmas gift in July. 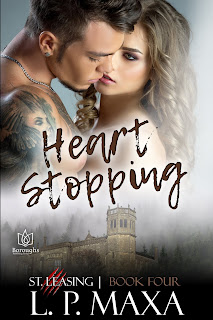 
Ten years ago Baze Carter fell irrevocably in love and knew he'd found his forever only to have her ripped from his arms, never to be seen again. Broken, and unable to find her, he made a life for himself as a baseball coach at St. Leasing School for Boys. Their secret, hidden for centuries, has been in peril for the past year, and now more than ever, Baze and his pack need to end the evil that plagues them. When Penelope Sutton is discovered bruised and battered lying in the road in front of his home, Baze is elated and murderous in equal measure. Anyone who dare harm his long lost mate will be made to pay, but not before Baze and Pen find their way back to each other.

Read an Excerpt from Heart Stopping:

“Hey, you okay?” She came out of the bathroom, steam escaping through the open door. Baze was bent at the waist, clutching the high-backed armchair next to the bed she’d slept in. She could see the tension in his posture. “Do I still smell like—”

“Please, Pen, please don’t say his name.” He turned to look at her, his eyes pleading. “I can’t handle it right now.”

She lifted her arm, smelling her skin. She thought she smelled like the soap she’d used in the shower. But her nose wasn’t the nose of a shifter. “Do I, uh, smell okay?”

He nodded. “You smell like me.” He took a step toward her, his hands reaching.

She wanted him to touch her, so her heart sank when his palms dropped back to his side. Penelope stood still, not sure what to do next. She’d showered like he’d asked; she was wearing his clothes. Now it was time for them to go downstairs and meet his pack. She’d be lying if she said she wasn’t nervous. Packs weren’t common, not in this day. But from what she knew, shifter packs were closer than family. They were tight-knit, protective, and they didn’t take to outsiders all that well.

She may have been Baze’s whole world when they were kids, but they were basically strangers at this point.

“When you meet them, my friends, you can’t touch them.”

Her eyes snapped to his face. “What?”

He shook his head, his gaze weary. “I feel…on edge. I feel possessive of you, and I can’t seem to shake it.” He licked his lips. “I’ll get it under control. But in the meantime, please don’t let them touch you. Especially the young guys, they’re not bonded.”

Was everything they’d gone through as kids coming back full force? Would the pain come back too? And the million-dollar question: what would they do about it if it did?

She nodded, letting him know that she’d heard him and she understood. And when he gestured for her to step in front of him, she waited in the hall to let him lead her down the stairs and into what appeared to be a massive living room.

The first thing she saw was the mounds of Chinese food on the large, long walnut coffee table. She put her hand on her stomach when it growled loudly. It’d been days since she’d had a real meal. She was starving, and now everyone knew it. “Sorry.”

A girl with long blonde hair, a shade lighter than Pen’s, stepped forward. “Don’t apologize.” Her smile was kind and she held a plate out, piled high with lo mein and orange chicken. “I’m Molly, Keller’s mate.”

“Thank you.” Pen took the food, not able to resist the smell any longer.

Pen sent the group a wave. “Penelope. But you can call me Pen.” She glanced to Baze, gauging his reaction. He’d been the first person to ever call her Pen, but it’d stuck even after they’d been separated. Maybe it was her way of keeping him with her, even when there were oceans between them.

“You can call me Dom, and that skinny guy over there goes by Linc.” The man who’d addressed her stood, holding his hand out.

She looked at it but took a step away. “Sorry, I um…” She let her words trail off. She was normally a friendly person; she was a hugger. But she believed Baze when he’d said he was on edge and he didn’t want anyone to touch her. She may not be one hundred percent certain what the future held for the two of them, but she didn’t want to make the present any harder than it needed to be.

“Don’t touch her, any of you.” Baze grabbed her arm and gently hauled her behind his body and onto a vacant chair that looked like it had been pulled in from an unseen dining room. “I can’t handle it.”

Dom held his hands up in surrender. “No problem, man. I know how that feels.” 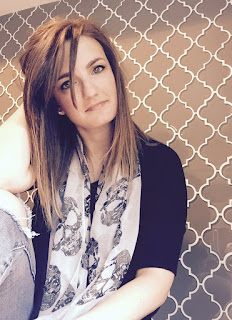 L.P. lives in Austin, Texas with her husband, daughter, three rescue dogs, four chickens, two dwarf goats, and one adopted cat. The fish died. She is a full-time writer, and part time business owner. L.P. says she loves to read as much as she loves to write, and reading a good book is her reward after writing one. In her spare time, she fosters puppies for a rescue organization based in Austin.