An age-old secret must be kept safe...

Until the next successor is chosen.

It's been seventeen years since Father Baez, formerly Broderick Ladro, entered the monastery to fulfill his legacy, turning his back on all earthly affairs. His strange visions and doubts have steadily increased through the years and he goes on a desert retreat to make sense of it all.

Brodie’s painting, The Raising of Lazarus, is endowed with the power to heal. A secret that must be guarded, as it has been since the first was painted thousands of years ago by Annas Zevi who witnessed the miraculous event.

Brodie senses that a new artist is being summoned. But who?

Martha, Ulla's daughter, the daughter Brodie has never seen or met, is experiencing the same visions. An unknown hand seems determined that father and daughter should meet.

Amidst a series of baffling revelations, the action moves across the USA, UK, Spain, Israel and Cyprus. A pastor and an incredibly wealthy Las Vegas casino owner knows the secret and are hell-bent on stealing the miraculous painting for wealth and power.

Unless Brodie, his daughter, Martha, and their close friends, succeed in keeping the Lazarus legacy alive and the succession unbroken, the power to heal will fall on evil hands.

Order early and get a discounted copy of The Lazarus Continuum!

Bestselling, and multi-award-winning British author, Ken Fry, holds a university Master's Degree in Literature and has traveled around the world. The places and events are reflected in his stories and most of his tales are based on his own experiences.

He has extensive knowledge of the Art world, which he acquired while working as a Publisher in a major UK publishing house -- a wholly owned subsidiary of the HEARST Corp of the USA. In his thirteen years with the company, he worked within the Fine Arts and Antiques division of the organisation and controlled four major international titles.

He is now retired and devotes his full time to writing. He lives in the UK and shares his home with 'Dickens' his Shetland Sheepdog.

Fry has published 10 mystery suspense thrillers to date: The Lazarus Continuum, The Chronicles of Aveline, Disjointed Tales: A Collection of Eccentric Short Stories, The Patmos Enigma, Red Ground, The Lazarus Succession, Suicide Seeds, The Brodsky Affair, and 2 short stories, Check Mate, and Is That You, Jim? (Free)

The Patmos Enigma and The Lazarus Succession are Bestsellers in Christian Fantasy, Religious Mystery, Religious Fiction and Biblical Fiction on Amazon UK.

Join Ken Fry's Circle of Readers and get free books and discounts:
www.booksbykenfry.com 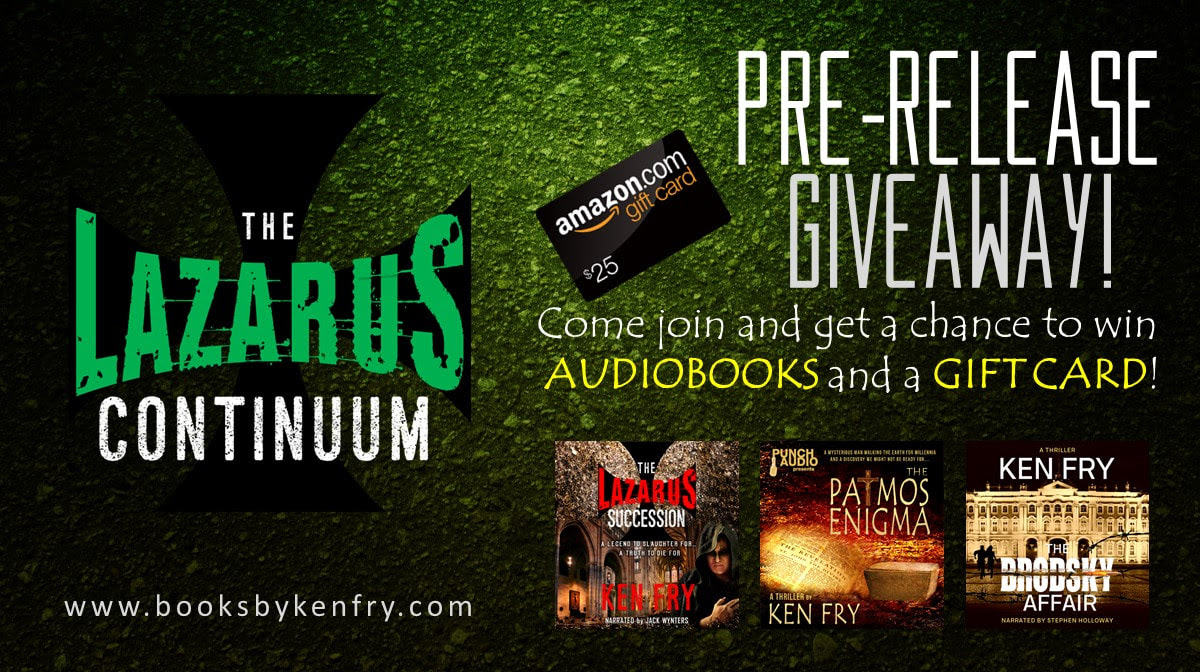