An Inside Look at… Redemption from a Dark Past ~ The latest historical romance from Kelli A. Wilkins 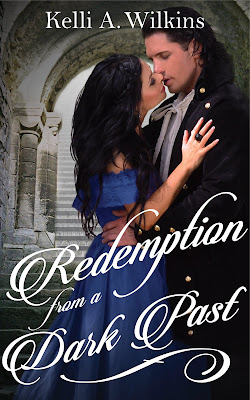 An Inside Look at… Redemption from a Dark Past
The latest historical romance from Kelli A. Wilkins
www.KelliWilkins.com

Today I’m sharing a look at the making of my latest historical romance, Redemption from a Dark Past.

When I sit down to write an historical romance, I never know where (or when) my story will take me. I’ve written romances set in the Old West, the Minnesota wilderness, Colonial Pennsylvania, and Celtic Scotland. Redemption from a Dark Past takes place in another unique locale, the Kingdom of Hungary.

For me, the setting conjures up images of brooding castles perched on treacherous mountaintops, tiny villages, medieval stone cities, vampires, and Prince Vlad. Although the book does not take place in Transylvania specifically, this atypical location appealed to me. It seemed like the perfect place for a Gothic novel filled with secrets, danger, deception, and superstition.

I enjoyed creating the cast of unusual characters and setting the stage for the drama that’s about to unfold. Right from the start, we meet Lord Sebestyen Adrik and learn that he’s a troubled hero who has hidden himself away in his isolated castle. He’s depressed, guilt-ridden, has an unsavory reputation, and is the subject of nasty rumors spread by superstitious villagers.

The heroine, Katarina, is feisty, clever, and anything but superstitious. She dismisses tales of evil spirits and ghosts, and doesn’t have time for old wives’ tales. She’s ambitious and wants to leave her pathetic job on the goat farm for better things. When she learns that she’s about to be forced into marriage to a much older man, she jumps at the chance to be Lord Adrik’s companion—despite all the terrifying stories she has been told. Katarina’s boldness and intelligence make her the perfect person to free Sebestyen from his dark past.

When I set about creating the mysterious Lord Adrik, I wanted to make him a flawed and sympathetic hero. He has two physical ailments (one most romance heroes never have) as well as several psychological scars. And as if they weren’t enough problems, he also has a reputation as a murderer (among other things). At the start of the book, he has just about given up on life and any hope of being happy. By giving Sebestyen all this “baggage” I made him vulnerable and provided him with lofty goals to reach.

As I wrote, I added layers of secrets, built suspense, and created numerous plot twists and turns. Readers follow Katarina’s adventures and are not sure what—or who—to believe. Can Magda the surly, gossiping cook be trusted? How did Lady Adrik die? Is the castle really haunted? What happened to Lord Adrik’s previous companions? Are the rumors about him true? Katarina is left alone with Sebestyen every night, should she fear for her safety? Everyone says she should!
Over the course of the book, Katarina draws Sebestyen out of his shell, and just when she thought she knew him, she uncovers a disturbing secret he’s been hiding from her. Katarina tries to make sense of it all, while following her heart.

Not everyone in this story is exactly what (or who) they seem to be, and this adds another level of mystery and intrigue to the book. Combining all these elements into a sensual, Gothic romance was a lot of fun, and I hope readers will enjoy this trip into “the Dark Lord’s lair.”
Here’s the book summary, a short excerpt, and links.
About Redemption From a Dark Past:

Lord Sebestyen Adrik has an unsavory reputation as a madman, murderer… and worse. Lonely and searching for love, he seeks the companionship of local young women, hoping one of them will ease his torment and bring him the happiness he longs for. Katarina is his last chance—but will she fear him like all the others? Or is she the one who can lift his curse?
Desperate to avoid a forced marriage, Katarina agrees to become Lord Adrik’s latest companion, despite the rumors she has heard about him. She discovers the “Dark Lord’s” secret past and realizes he’s not the monster everyone thinks he is.
As their love blossoms, she renews his passion for life—yet they cannot escape the ghosts of the past.
When a meeting of the nobility goes horribly wrong, Sebestyen’s world unravels, and his enemies plot to destroy him. As all seems lost, a mysterious stranger arrives at the castle. Sebestyen must decide if he is a friend or a foe…and if he can find redemption in his love for Katarina, or lose her and everything else that he holds dear.
* * *
Read an Excerpt:

Sebestyen winced as he propped his right leg on the padded footstool. He had a crackling fire before him, his belly was full, he’d drunk almost an entire bottle of wine, and yet he was not content.
Another girl had arrived. He had another chance to find happiness, but he didn’t dare get his hopes up. She would probably be another sour disappointment like all the others. Each failure drove a dagger deeper into his heart, and yet, he persisted.
But why? Why did he put himself through the pain, the hurt, and the humiliation of buying another companion? Perhaps it would be best if he accepted the fact that he was cursed. He’d never be happy, never know love again.
He watched the flames and sipped his red wine. The rumors about him had spread throughout the countryside. Lukacs was right when he’d told him that the villagers would not allow their daughters to come here, no matter what enticements he offered. He’d almost given up, but then Lukacs had written with the news that Katarina had volunteered to be his companion. Why? Surely she knew the stories about him.
Despite the tales circulating in the villages, he had never harmed any of the young ladies who came to the castle. If anything, he was generous. He bought them new clothes, fed them, and paid them well. He certainly wasn’t a rapist or a drinker of virgin blood as he was portrayed in the stories.
“But am I the monster they say I am?” he wondered aloud.
He stared at a painting on the far wall. Two boys in formal dress, one with light blond wavy hair, the other with black hair, posed with a black and white dog. He raised his glass in a silent toast to Tristan. The portrait was commissioned when he’d been, what? Ten? And Tristan was nearly fifteen. Those were good times, when life was easy.
Now he was all alone, trapped in this miserable castle and forced to suffer with the boring duties he had inherited from his despicable father. It wasn’t fair. He’d had different plans for his life, plans that included travelling, marrying a woman he loved, and being happy. Instead, he sat here every night drinking himself into a stupor, hating his life, hating his very existence.
He closed his eyes and leaned back in the leather chair. Perhaps Katarina could redeem him and lift his curse. If she did, she would earn riches beyond her wildest dreams. If not, he would suffer bitter disappointment yet again. “Why do I even try?” he whispered. “I’m doomed.”
* * *
Katarina stood in the parlor doorway, clutching her skirts. The large room was lit with three candles, and firelight cast long shadows on the walls. One story about His Lordship seemed to be true; he did live in the dark. She heard a low growling noise coming from the corner. What was that? Did Lord Adrik have a vicious dog?
She stepped into the parlor and spotted a figure slumped in the throne-sized chair near the fire. A white ruffled sleeve hung over the armrest. A moment later, she realized the noise was coming from Lord Adrik. He was fast asleep and snoring.
Had she kept him waiting too long? She had eaten her fill of meat and potatoes and even tried the greens and biscuits. His Lordship hadn’t been interested in talking to her before, so why he had summoned her here?
She touched his arm. “Lord Adrik?”
He jerked awake. “Dammit! What is it?”
She reeled back. “I finished eating and—”
“Your name again?”
“Katarina.” Had he forgotten about her already?
* * *
Order Redemption From a Dark Past here:

Link to all other platforms

Meet the Author:
Kelli A. Wilkins is an award-winning author who has published more than 100 short stories, 19 romance novels, and 5 non-fiction books.
Her romances span many genres and heat levels, and she’s also been known to scare readers with her horror stories.
Kelli’s writing book, You Can Write—Really! A Beginner’s Guide to Writing Fiction is a fun and informative guide filled with writing exercises and helpful tips all authors can use.

Her historical romance, Redemption from a Dark Past, was published in June of 2018. This full-length Gothic novel is set in the kingdom of Hungary in 1723 and blends a sensual romance with mystery and suspense.
Look for more romances, horror stories, and an online writing class coming later in 2018.
Kelli posts on her Facebook author page: https://www.facebook.com/AuthorKelliWilkins and Twitter: www.Twitter.com/KWilkinsauthor.
Visit her website www.KelliWilkins.com and blog http://kelliwilkinsauthor.blogspot.com/ to learn more about all of her writings.
Catch Up with Kelli:
Catch up with Kelli on the web:

Email ThisBlogThis!Share to TwitterShare to FacebookShare to Pinterest
Labels: Castle, Historical Romance, Hungary, Kelli A. Wilkins, Redemption from a Dark Past