If you love Buffy the Vampire Slayer then you’ll love Aria Naveed. Kicking butt and saving people is kind of her thing. 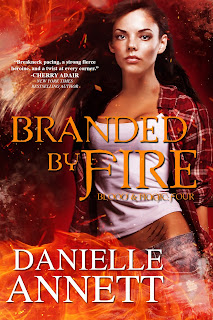 Lovers of Urban Fantasy and Paranormal Romance do NOT want miss out on Danielle Annett’s BRANDED BY FIRE. You must see why Cherry Adair calls BRANDED BY FIRE a novel with “[b]reakneck pacing, a strong fierce heroine, and a twist at every corner”!

About Branded by Fire:

Aria Naveed can’t decide what’s worse—being mate-bonded to Declan Valkenaar, the Alpha of the Pacific Northwest Pack, or owning up to the fact that she’s developing feelings for him.

Her bond to Declan is the one thing keeping her grounded and preventing her new power from destroying everything and everyone around her.

If Aria doesn’t tread carefully, especially where her heart is concerned, she’ll learn the hard way that if you play with fire, you'll always get burned. 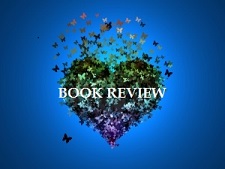 Branded by Fire is the best one yet (and the other 3 books in the series rock!).

As Aria's powers to continue to manifest stronger and stronger, the prophecy of her destroying the city becomes more evident. The only person who can truly calm her and keep her from hurting herself and other is Declan, her bonded mate. As the story progresses we see a different Aria and Declan than we've seen in other installments and I must say - I love them! Sure, Aria is struggling against the bond; she didn't agree to it after all, but there is a definite shift (no pun intended) between Aria and Declan.

While Aria is trying to figure out her feelings for Declan, her evil mother is using psychological methods to try and manipulate her. Aria's mother is playing games and planning for something huge that involves all of the shifters surrounding Aria. As a group, it's up to everyone to figure out what that plan involves and how to stop it before it starts.

The books in the Blook & Magic series are fast paced and easy to follow. Aria isn't the perfect heroine - in fact, she's extremely flawed. True to the series, Aria is reckless and impetuous, acting before she thinks about the potential consequences, and is historically unable to ask for help because she has the "I can do anything" attitude. Strong and independent is great but putting yourself in harms way to prove a point is just reckless. Her actions in Branded by Fire could have cost her everything because she jumps in guns a blazin' without regard to the situation or circumstance. Fortunately, she has a small group of devoted men who are there to back her up.

I really enjoy the world created by Danielle Annett in the Blood and Magic. I like the continued development of the world the series is based in and the characters that run across the pages. Her attitude toward Declan changes as she begins to realize that he's not there to control her but support her in a way that she's not used to being supported.  There are action sequences that deliver and keep the reader engaged. The book is full of action, fast paced, and twists and turns abound!

I voluntarily reviewed an ARC of this book.