New Release ~ Beauty & the Bigfoot by Kelli A. Wilkins ~ Read an #Excerpt 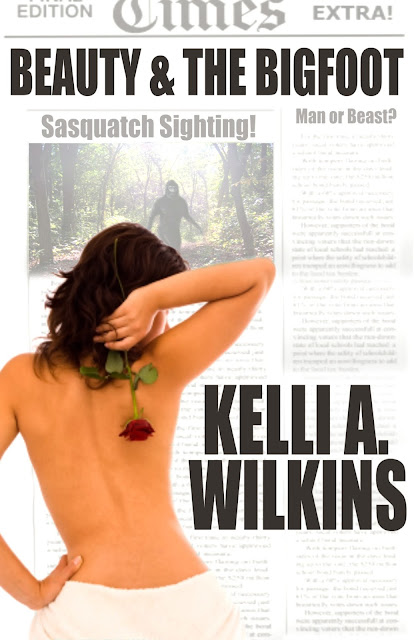 Have you ever read a Bigfoot romance?
Beauty & the Bigfoot – a quirky paranormal comedy

By Kelli A. Wilkins
www.KelliWilkins.com

My latest release, Beauty & the Bigfoot (Yes, it’s a Bigfoot romance!) offers readers a quirky look at the legend of Bigfoot. When I told people I was writing a Bigfoot romance, they said, “You’re kidding, right?”

Nope! Maybe I watched too much In Search Of… as a child, but for as long as I can remember, I’ve always been interested in “unexplained phenomena” (aka: the strange and unusual).

I started out writing horror short stories and romances, so it was only a matter of time before I went down the paranormal romance road. Beauty & the Bigfoot is my third paranormal romance. My first, Confessions of a Vampire’s Lover, is a more serious love story, and Killer in Wolf’s Clothing takes the concept of werewolves in a very different direction.

Beauty & the Bigfoot started out with the premise: “What if a cryptozoologist’s daughter fell in love with a captured Bigfoot?” I liked the idea, but I wasn’t sure where I could take it.

Later, when I was doing research for the book, (Yes, there was a lot of research involved!), I came across several historical accounts dating back to the 1500s of huge, hairy “wild men” living in the woods. Native American tribes had several names for Bigfoot and they took the subject seriously. After reading these stories, my imagination took over. (Once you read the book, you’ll see how it all ties in together. If you think you know how the story ends, think again!)

Beauty & the Bigfoot was a lot of fun to write and I had a great time creating the characters. Through Tara and her eccentric father, Charlie, I was able to turn up the camp level and add in many wacky references and asides. They don’t exactly take the situation seriously, and neither should readers. It’s called a paranormal comedy for a reason.

So, is Bigfoot real? Is the Patterson film a hoax? Are there Sasquatches roaming the forests of the Pacific Northwest? I don’t know for sure, but I do know that the legend continues on – with a happy ending – in Beauty & the Bigfoot.

Beauty & the Bigfoot
Can true love exist between the species?

Tara’s world is anything but normal. Her father is known as the resident crackpot – just because he’s on a personal mission to catch a Sasquatch. Despite all of the “Bigfoot evidence” cluttering their house, Tara never really believed in Bigfoot – until the day her father brought him home.

When Tara finally succumbs to her animalistic urges, she learns that Joe is not exactly who – or what – he seems. Joe is more than a Sasquatch – he’s her soul mate!

Tara shook her head and sighed as she entered the cluttered den. She adjusted the framed certificate from the Cryptozoological Society recognizing her father as a “Certified Bigfoot Investigator.” It hung on the wall in a place of esteemed honor—next to an 8-by-10 enlargement of frame 352 from the Patterson film. The infamous shot showed a female Bigfoot in mid-stride looking over her shoulder at the camera.
As much as she loved her dad, she had never understood his obsession with Bigfoot.
“Charlie MacAllister’s Bigfoot Museum” was her father’s pride and joy. Floor-to-ceiling bookcases were crammed with dusty paperbacks titled It Lurks in the Woods and Some Call it Sasquatch! Notebooks detailing his expeditions, sightings, and other “evidence” were stacked next to the loveseat. Scrapbooks filled with tabloid articles proclaiming I WAS BIGFOOT’S BRIDE and BIGFOOT SIGHTED IN UFO were strewn on the coffee table. Her mother’s antique china closet held plaster casts of Bigfoot tracks.
She opened the back door, letting in the fresh July air. The den needed to be aired out and cleaned, and she could only do that when her father went on a “field excursion.” If she was lucky, she would be able to vacuum and dust before—
“Tara! Where are you?” Her father raced into the den, then scowled as he spotted her. “What are you doing in here? Are you trying to clean again? What did I tell you about that?”
She stared at her father like he was from another planet. His medium-brown hair stuck up all over his head like horns, he hadn’t shaved in days, and his clothes were covered with dirt and brambles. It was no wonder why the whole town considered him a raving kook—among other things.
“Come on, come on! You’ve gotta come out and see it! I did it. I did it.”
“Now what?” she forced herself to ask. How many times had Dad rushed in with the “biggest discovery of the year” only to show her a photo of another Bigfoot track? She hated to dampen his enthusiasm, but she had been surrounded by Bigfoot paraphernalia for her entire life and she just wasn’t interested in it anymore.
“I got him. The big male. You know the one.” He gestured at a framed, grainy photo of something running through the woods. “Him.”
She rolled her eyes. Her father wasn’t like other Bigfoot researchers who wanted to catch any old Bigfoot—No, Charlie MacAllister was on a personal mission to catch one particular Bigfoot. One he claimed had been living within five miles of their house for years.
“Dad, if this is a bear cub, or a—”
“No. You’ll see. Now I’ll finally be able to prove that I’m not the nutcase everyone in town thinks I am.”
She let her father drag her into the backyard. “Oh my God! What is that?”
She ran to the flatbed trailer and stared at the unconscious creature. It lay stretched out on its back with its hairy arms and legs shackled to the metal trailer frame. Dad had captured something, all right. There was no mistaking what it was. She had seen enough photos of Bigfoot to know him anywhere.
“You did catch him.” She looked at her father. “But, but…” For once in her life, she was speechless.
Her father grinned and folded his arms across his chest. “Well, now do you believe me? I told you I caught Bigfoot. You should listen to your old man. He knows what he’s talking about.”
Her mind whirled. How was it possible? After twenty years of searching, her father had done it. He had actually captured Bigfoot.
***
Order your copy of Beauty & the Bigfoot here:
Amazon: http://amzn.to/2kfKR17

I hope you have as much fun reading the story as I did writing it! I welcome comments and questions from readers, so feel free to contact me via my website, blog, or social media.
Happy Reading,
Kelli A. Wilkins
ABOUT THE AUTHOR:
Kelli A. Wilkins is an award-winning author who has published more than 100 short stories, 19 romance novels, and 5 non-fiction books. Her romances span many genres and heat levels.
Her paranormal-comedy, Beauty & the Bigfoot, was published in September 2017.
Kelli released Trust with Hearts, a contemporary romance, in July 2017. Her third gay romance, Four Days with Jack, was released in June 2017. Kelli’s trilogy of erotic romance novellas, Midsummer Night’s Delights, Midwinter Night’s Delights, and Ultimate Night’s Delights was published in spring 2017.
Loving a Wild Stranger was published in January 2017. This historical/pioneer romance is set in the wilds of the Michigan Territory and blends tender romance with adventure.
Kelli's third Medallion Press romance, Lies, Love & Redemption was released in September 2016. This spicy historical western is set on the Nebraska prairie in 1877.
Her writing book, You Can Write—Really! A Beginner’s Guide to Writing Fiction is a fun and informative guide filled with writing exercises and helpful tips all authors can use.
Kelli posts on her Facebook author page: https://www.facebook.com/AuthorKelliWilkins and Twitter: www.Twitter.com/KWilkinsauthor.
She also writes a weekly blog: http://kelliwilkinsauthor.blogspot.com/.
Visit her website, www.KelliWilkins.com to learn more about all of her writings, read book excerpts, reviews, and more. Readers can sign up for her newsletter here: http://eepurl.com/HVQqb.
Here are a few links to find Kelli & her writings on the web
Amazon Author Page: www.amazon.com/author/kelliwilkins
Website: http://www.KelliWilkins.com
Blog: http://kelliwilkinsauthor.blogspot.com/
Newsletter sign-up: http://eepurl.com/HVQqb
Facebook Author Page: https://www.facebook.com/AuthorKelliWilkins
Facebook Contemporary Romances: https://www.facebook.com/Contemporary-Romances-by-Kelli-A-Wilkins-1965702023664339/
Facebook Gay Romances: https://www.facebook.com/GayRomancesbyKelliAWilkins/
Facebook Historical Romances: https://www.facebook.com/Historical-Romances-by-Kelli-A-Wilkins-1703805359922371/
Twitter: www.Twitter.com/KWilkinsauthor
Pinterest: http://www.pinterest.com/KWilkinsAuthor/
Medallion Press Author Page: http://medallionpress.com/author/kelli-wilkins/
Goodreads: http://www.goodreads.com/author/show/1123678.Kelli_A_Wilkins
Authors Den: http://www.authorsden.com/visit/author.asp?authorid=61801
at 7:00 AM