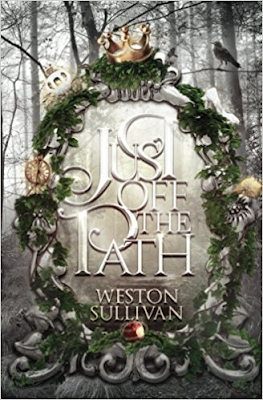 Hansel never asked to be a hero. He never wanted to fall in love with Rapunzel, Queen of the East. He didn’t ask to be raised by Gothel the Wretch, and he certainly never wanted to be credited for her arrest. But more than any of that, Hansel never wanted to lie: but he did. He lied about everything. He thought that he was done with it all when he and his sister Gretel retreated into the woods to reclaim their land, but he should have known better.

Hansel needs to find a way to fix this, otherwise he will be responsible for Grimm’s destruction, or that is what he thinks. As Hansel isn’t the only liar in Grimm.
~~~~~~~~~~~~~
Read an Excerpt:

Looking Glass Upon The Wall

The oval mirror stood against the stone wall—antique, but broken all the same. A once small crack grew, until it split it in two from a century of misuse. It had belonged to a queen who loved it almost as much as she loved herself, and as each year passed the crack deepened. Unlike the queen—who lay only three flights down in her chamber—the mirror was awake and had been since the curse was placed.

It remembered a time when the queen would stare at herself, and even though she looked past it, somehow it felt lucky to have her so close. Hours would pass before she left the mirror alone in the tower. It watched her as she moved through the castle, cooing. She didn’t know it, but the mirror saw everything, from the beauty of her face to the darkness inside her. When it looked at her, it could see the envy emanating from within. The queen was a dragon who’d yet to learn how to breathe fire, and it was through that rage that the mirror accidentally destroyed the entire world.

There was no one the queen hated more than her stepdaughter. The girl was fresh snow—gentle, welcomed, and beautiful. She knew that her husband would have stayed married to the girl’s mother had she not died during childbirth. The mirror could feel the queen’s rage at the thought of the girl—or any of the king’s other children—inheriting the throne rather than her own unborn heir.

The mirror watched as the queen brushed her hair, carefully and meticulously as to the placement of each tantalizing strand. She trusted the mirror to always know what she was thinking, to reflect the light at just the right angle so that her cheekbones made a diamond of her face, so that her jawline was sharp, and her collarbone protruded from her neck.

It lied to her every day.

One morning, as the queen emerged from the bath, steam filled the room and covered the glass with thick condensation. Sitting opposite the mirror, she combed the moisture from her hair. The mirror was elated. It swooned at the sight of her. The steam turned to droplets of misty water and slid slowly, smoothly down its surface. The mirror knew all. It tried not to eavesdrop on the thoughts of its mistress, but sometimes it was necessary.

“Mirror, if not me, then who?” The queen pulled on her robe to cover her chest. She bit her bottom lip and examined herself closely. “I am queen. No one is fairer than I. If not I, then who?”

She trusted the mirror.

At that moment—perhaps due to a trick of the light, or perhaps a test of the mind—the queen saw it all the same, a woman appeared in the mirror in place of her own reflection; a beautiful, pale face with pink lips and small eyes. It was the queen’s stepdaughter, bloomed and ripened. The queen jerked backward in her chair, stood, then crossed the room to stand in front of the mirror.

The mirror lied to her every day.

It saw what Snow White would become. Her life would span a century, she would tame the dwarves, become rich, and start a war. Never would she be known for her beauty more than her cunning.

Crying out, the queen struck the mirror, leaving a crack in the glass, and blood on her hands. She sobbed, fingers over her mouth, then fell to her knees, screaming. A chambermaid soon rushed into the room and led the queen out. Shortly after, the door was bolted, the sound of metal against wood echoing throughout the room. The mist cleared from the room, and the mirror waited for the queen to return. It waited for days…weeks.

The queen was locked away in the royal quarters, fearful of her own sanity. The servants spent those weeks covering each and every mirror in the castle with bedsheets, all except for the one that showed the fateful image. No one dared enter the room it presided over for fear the mirror was evil. When the queen emerged from her chambers, she intended never to see her reflection again.
~~~~~~~~~~~~~
Meet the Author:

After graduating with a BA in Creative Writing from the University of South Florida in 2017, Weston Sullivan moved to New York City to live and write in the heart of the industry. In late 2016, he began working as an intern in the submissions department of BookFish Books. His short story, "On the Hillside", won the Anspaugh Award for Fiction in February of 2017, and his novel, JUST OFF THE PATH, is due for release in early September.   He likes to believe that he is in charge of his own destiny, but at the end of the day, he knows that he was born to serve his two beloved cats.

Weston Sullivan will be awarding a $10 Amazon or Barnes and Noble GC to a randomly drawn winner via rafflecopter during the tour.