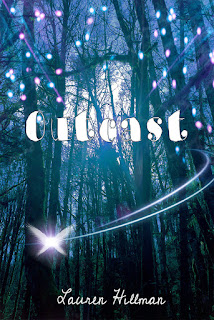 Merissa is a faerie with no magic, no memory... and no friends. Until a hummingbird arrives with an ominous message: The Queen wants her dead.

With the help of the hummingbird Chippen, Merissa sets out on a dangerous journey to find the one faerie who may know the truth about her past. But they only find more questions when they meet Griff, a gypsy boy with pale grey eyes and one heart-melting dimple and Merissa discovers a strange connection between them. But soon her past will endanger them all.

But she is a faerie. And faeries are protectors. So if anything will help Merissa regain her lost powers it will be to save her friends.

Griff was uncomfortable. He was swinging upside down in a thick net as it pressed heavily into his neck and forced his arm awkwardly behind his back. A small faerie with a tattered and dirty purple dress flew out of her hiding place towards him. As she got closer he noticed a streak of ice blue in her otherwise black hair. A vibrant green hummingbird followed her.

“Chippen,” the faerie called, “Help me undo this. This isn’t the shuck. We’ve got to get the trap ready again. Hurry!”

So he had been caught in a trap meant for a shuck. Well that’s embarrassing. “Oy,” Griff yelled, “What are you playing at? Let me go!”

She sneered in his general direction. “I’m trying. If you’d just give me a second.” She was yanking away at the knots with her tiny fingers making no progress.

“If I cut it then I can’t reuse it for the shuck now, can I.” She paused briefly before mumbling, “And I am not a little girl.” She stretched herself taller as she continued to work.

Griff looked at her in surprise. He hadn’t realized he’d spoken out loud. Oops. He smirked, “What’s your name, faerie?”

“Never you mind. You ruined my trap,” she answered, accusingly.

“Well it trapped you, didn’t it,” she snapped. “Besides I only had a short time to get it ready, okay, and at least now we know it works, right Chippen?”

“I never had any doubts,” the hummingbird replied, his eyes darting around on high alert.

The girl tugged and pulled at the knots with her fingers, biting her lip as she worked.

“Slow down,” Griff ordered, “You’re only making it worse.”

“I can’t slow down,” she said, glancing up, “We don’t know when the shuck will be back.”

She returned to untangling the knots, but she did begin to work more carefully and with more of a determined focus. Griff watched her curiously. Her skin was such an unusual colour. Like bronze only somehow deeper. And she was so small. Why on earth would this little faerie want to take on a shuck?

“It’s not that I want to,” she said slowly. “It’s my side of a magical contract. I have to kill this shuck or… well I don’t know exactly what would happen but I don’t think I want to find out either.”

Griff stared at her, not sure what was happening. So he answered her simply, “You’d die.”

She froze, holding the ends of the rope. Then she looked over at the bird behind her, “Chippen is that true?”

Griff rolled his eyes. She didn’t believe him.

The bird called Chippen answered gently, “Yes, it’s true, Merissa. Fae who break their word on a magical contract are turned to stone. Forever,” he added.

Merissa didn’t answer. She was fighting back tears. Finally her fingers found the last loop and the net loosened, falling to the ground. Griff, still tangled inside, fell heavily with it, landing with a thud.

Lauren Hillman is an actor, teacher and writer living in Vancouver, BC. Originally from Sault Ste. Marie, Ontario she moved west after university to pursue a career in acting. For the last ten years she has primarily been working as an acting teacher in elementary and middle schools, occasionally writing scripts to be performed on stage. The transition to novelist wasn’t easy but was aided by the knowledge and love of storytelling that the theatre gave her. Her first novel, Outcast, was largely inspired by her students.

Lauren Hillman will be awarding a $30 BN GC to a randomly drawn winner via rafflecopter during the tour.

Make sure to follow the tour and comment; the more you comment, the better your chances of winning. The tour dates can be found here:
http://goddessfishpromotions.blogspot.com/2017/09/blurb-blitz-outcast-by-lauren-hillman.html