A Visit with Rothgar from The Viking’s Witch by Kelli A. Wilkins @KWilkinsauthor #HistoricalRomance

A Visit with Rothgar from The Viking’s Witch
By Kelli A. Wilkins
www.KelliWilkins.com 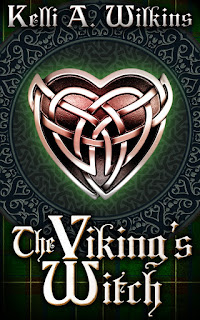 Hi everyone!
Today we’re chatting with Rothgar, the hero from The Viking’s Witch, a Gold IPPY Award winning historical romance from Kelli A. Wilkins. Before Rothgar answers our questions, let’s learn a bit about the book.
The Viking’s Witch
About to be burned at the stake by her fellow villagers, Odaria does what any betrayed witch facing certain death would do. She calls down a curse. Within seconds, rampaging Norsemen raid the village, capturing everyone except her.
But her reprieve is short-lived, and Odaria lands in the clutches of the Norse leader Rothgar. Can she remain true to herself and fight her growing attraction to this domineering man, or will she fall under his influence and be used for his ambitions?
After Rothgar witnesses Odaria’s powers firsthand, he strikes a bargain with her. The raven-haired beauty will use her magical abilities to help him with his quest in exchange for safe passage off the isle. But can this cunning woman be trusted, or is she using him to exact vengeance on her village?
Together they must fight bloodthirsty villagers, battle a mutinous band of Norsemen, find a missing Norse ship, and learn to trust each other…before time is up.
Welcome Rothgar. Can you tell us how you came to the Orkney Islands in Scotland and met Odaria, the heroine in The Viking’s Witch?
Ja. I was sent there to look for my cousin, Orvind. His ship had vanished and my uncle wanted me to find him. After we came ashore, I found Odaria hiding in a gathering hall and I rescued her from a vile attack. To repay my kindness, she hit me! It was a very unusual first-meeting.
You sound very noble. How would you describe yourself?

A strong warrior who does not tolerate disloyalty or fools. I’ll fight for a cause I believe in, but I cannot stomach excess violence or abuse toward women. I’m a disciplined man who stands by my word, and I expect the same from others.
What was your first impression of Odaria?

I had never known a woman like her before—soft and tender one minute, then feisty and fighting the next. I was impressed by her inner strength (she had just been tied to a stake and nearly burned to death), and her ability to cope with tragic situations. Later, when she wept like a frightened girl, I saw how vulnerable she was deep down, and my heart melted.
What is it about Odaria that makes you crazy in a good way?

She’s very strong-willed and opinionated and likes to do things her own way, no matter what. When I first met her, this was very frustrating and drove me crazy, because I knew what was best for her, and yet, she fought me at every turn. Only later did I come to realize that all these traits made me love her even more.
Tell us one thing you had to overcome to win Odaria’s love.

Winning her love wasn’t easy. When we first met, she didn’t trust me at all, and after the way she had been treated in the past, I could see why. But after a little while, we grew to trust (and love) each other, but she always worried that I would betray her. In a way, I did, but I did it for a good cause. Naturally, she didn’t see things my way and I had to earn her trust all over again.
What was the sweetest romantic gesture you ever did for her?

When we were in Scotland, I gave her flowers and a gold brooch that made her happy. (I also did some rather naughty things with her in the bedchamber that I would not dare repeat here!) Now that we’re home, I’ll surprise her with flowers, jewelry, or a very romantic night spent under the stars.
What is your most important goal in life?

Now that Odaria and I have settled into a peaceful home life, my main goal is to provide for her and keep her safe. Odaria likes adventure, so I also strive to keep our lives interesting and make sure we never grow bored.
Who is the one person you respect and trust the most?

A man must trust his wife. Odaria has proven that she’s unlike any other woman, and I trust her with my life. I have the utmost respect for her and know that she will fight with me, and for me, if necessary. I also have great respect for my berserkr friend, Nordskog. His great courage and loyalty saved Odaria and me from certain death.
What is your greatest fear?

Losing Odaria. I lost my first wife and son in a fire, and I would never be able to live through something like that again.
What is your greatest hope?

That Odaria and I have several healthy, strong children who make us proud.
What is the biggest obstacle you’ve overcome?

I had to overcome many obstacles in my life, and a major one was learning how to carry on after my first wife died. For a few years after that terrible tragedy, I gave up raiding and traveling and was considered “soft” by many warriors. (Laughs). I’ve certainly overcome any reluctance to show them my stronger side—and many of them still have the bruises and scars to prove it! Sailing to Scotland and meeting Odaria renewed my strength and self-confidence and gave me a second chance at a happy life.
If Odaria could describe you in one word, what would it be?

Sexy? Strong? Virile? Brave? Bold? (Laughs.) Although all of those are true, knowing Odaria the way I do, if you asked her the question, she’d tell you: “Mine.”
Do you sometimes want to strangle your writer? Thrash her to within an inch of her life for what she put you through in the book?

Yes! Over the course of the book, Kelli put me through several very emotional trials. I had to discipline (and battle) fellow Norsemen, contend with the local villagers, protect Odaria, and still look for my cousin. It was a very exhausting few days, but I know that Kelli did it all for a good reason. She brought Odaria and I together and changed our lives forever. We’re both very happy now and quite indebted to Kelli for all she’s done for us. (Although she could have made things a little easier!) I’m also proud to tell everyone that The Viking’s Witch won a Gold IPPY Award for best romance ebook, so Kelli did an excellent job telling my story.
Thank you for your time, Rothgar. Is there anything else you’d like to add?

Yes. On Kelli’s behalf, I’d like to invite everyone to visit her website and social media pages to catch up on her latest romances and other news. She has written several other great books in all genres (historical, paranormal, gay, erotica, and contemporary) that readers will enjoy. Thank you for letting me share my thoughts today.
Read an excerpt from The Viking’s Witch:
Odaria scanned the cookroom and spotted a large table piled high with food. Brennan must have been planning a feast to celebrate her death. There would be plenty of meat and beer in the underground storage area. Men liked to eat. The Norsemen must be hungry from their long journey. Mayhap she could offer Rothgar a meal and strike a bargain with him.
“Are you hungry?” she asked, cocking her head. “I know where to find food and drink, wood for the fire, clean water, and—”
“Hvat ist das plass?”
She scowled at him, trying to decipher his words. A few seconds later, she understood. “This is a cookroom. Women in the village prepare meals here. See?” She waved at the iron pots, wooden pitchers, and other cookery items stacked on the shelves around the room. “They make food.”
Rothgar rolled his eyes. “Ja. Vat ist dat?” He pointed to the door behind her.
“The gathering hall. The men conduct business here. There is a room upstairs for sleeping. The larder, the food and drink, is below,” she said slowly, hoping he’d understand.
He nodded and inched closer to her. She tried to move away, but she had nowhere to go. Her back was pressed against the door. Rothgar grinned and cupped her chin in his wide hand. Her heart fluttered. What was he doing? She stared into his eyes as he bowed his head. His rough beard grazed her cheek as his lips lightly brushed against hers.
Her body tingled, and a wave of dizziness washed over her. The room spun and seemed to grow dim. As everything faded, she had a clear vision of wrapping her arms around Rothgar’s neck and eagerly pulling him close for a kiss. Dizzy, she pitched forward. Rothgar caught her and clutched her to his chest.
“Shh,” he soothed, running his hand through her loose hair. “I will not harm you, Odaria.”
She relaxed against his broad chest, letting him support her weight. His touch was calming, and she felt safe here, leaning against Rothgar as she would rest against a thick tree. She inhaled deep. Rothgar didn’t stink of rancid sweat like the other men. He smelled clean and salty, like the sea. The scent comforted her. She could almost fall asleep where she stood.
Rothgar curled his arms around her ribs. She didn’t protest. In spite of everything, he hadn’t harmed her and he had saved her from that horrible Norseman in the red tunic.
After a few moments, her dizzy spell passed, and she gazed at him. “You are not like the others. You are different, Rothgar.”
He smiled. “Ja, in some ways. But fear not, Odaria. I will not share you with the others. I wish to have you all to myself.” Rothgar chuckled and winked at her. “Now, show me this food.”
“Aye.” She had no choice but to obey Rothgar’s wishes—for now.
Purchase The Viking’s Witch here:
Amazon: http://amzn.to/2upR9wt
B&N: http://www.barnesandnoble.com/w/the-vikings-witch-kelli-wilkins/1112359676?ean=9781605421698&itm=1&usri=kelli+wilkins
Medallion Press: http://medallionmediagroup.com/books/the-vikings-witch/
ABOUT THE AUTHOR:

CATCH UP WITH KELLI