No tricks here, just treats for you!

Entangled is excited to be celebrating our Halloween Spook-tacular here with you! What better way to celebrate Halloween than with some fun treats? So we've picked 12 not to be missed paranormal reads that you will want to load onto your e-reader and even better each is on sale for just 99¢!
So be sure to pick these up while they're on sale for this week only!

Here is a brief list of the books on sale.
Scroll down to view covers and read all about the books.

Gone with the Wolf by Kristin Miller
Sex and the Single Vamp by Robin Covington
When Danger Bites by Heather Long
Love Me to Death by Marissa Clarke
The Red Lily by Juliette Cross
Night Walker by Lisa Kessler
Damage Control by Jess Anastasi
Bittersweet Blood by Nina Croft
Shifter Planet by D.B. Reynolds
Undying Destiny by Jessica Lee
Waking Up Dead by Emma Shortt
All Bets Are On by Cynthia Cooke

Gone With the Wolf

When CEO and alpha werewolf Drake Wilder discovers that his one true love is a secretary in his company, his primal instincts kick into overdrive. Free-spirited bartender Emelia Hudson wants nothing more than to make her Seattle-based bar succeed. Upon learning that her bar has become property of Wilder Financial, Emelia is determined to get some answers. When Drake’s twin brother senses that Drake has found his match—and now inherits their father’s billion dollar estate—he plans to take Emelia out. Drake vows to protect her at all costs, but he might have to pay with his own life.

Sex and the Single Vamp

Deacon is a patient vampire. He’s only loved one woman in over five hundred years— CiCi— and she chose another. So when she shows up in his office asking for help, he finally has the chance to lay that demon to rest. He’ll help her, but for a price—a night in his bed. But Deacon has a secret and when Cici is suddenly mortal again, his deception might be the only way restore her immortality. Can love bridge the gap between a heartbeat and forever?

Buttoned-up Corporal Kaitlyn Amador is dangerous on every level. Marine Captain Jax can survive the temptation for only so long before his wolf takes over and pursues what it wants.

Love Me to Death

[box] Up until the moment she's shot and left for dead, biologist Elena Arcos lived a pretty nondescript life. Now the “Slayer” Nikolai Itzov has abducted and pulled Elena into a world she never knew existed alongside her own. He's been sent to kill her before she transforms into the dark creature she's destined to become. Yet something in this notquite-human woman calls to Nikolai's blood. To his desire. To his soul. Now he must protect her...until she changes into the one thing he is sworn by birth to hate.

[box] The Black Lily needs a larger army if they are to defeat the vampire monarchy. In order to do so, former lieutenant Nikolai must seek help from the red-hooded temptress he needs to avoid, for the secret he carries could prove dangerous for her if she gets too close. But Sienna will do anything for the Black Lily…

After catching her fiance with another woman, the last thing Kate Bradley needs is romance, but after meeting Calisto she’s drawn to him in ways she doesn’t understand. Calisto has no doubt Kate is the reincarnation of his lost love, but the Fraternidad Del Fuego Santo has a new watcher with dark ambitions of his own. As old enemies re-emerge and a new threat arises, the betrayal that enslaved Calisto to the night might destroy the only woman he’s ever loved again.

Leigh Alphin is captain of the Fighter Force of the battleship Valiant Knox. He’s honorable, straightforward, and hard as nails – except for the soft spot he has for his new recruit Mia Wolfe. Now that she's one of his new recruits, it’s imperative he stop thinking about her in that way. Neither of them can afford to make this mistake, yet desire takes hold, consuming them. For the first time, Leigh's iron sense of honor falters as his heart fights for love...and against an enemy trying to destroy everything they hold dear.

Determined to solve the mystery of who she is and why everyone wants her dead, Tara Collins hires Christian Roth to help her uncover the truth. But Christian is more than your average PI. A vampire and ex-demon hunter, he lives among the humans, but now a crazed demon hell-bent on revenge is hunting him down, a fae assassin is on the loose with an unknown target, and the Order he abandoned desperately needs his help. As Tara's secrets and Christians problems collide, they'll learn that some rules are meant to be broken.

[box] Determined to remain on Harp to learn its secrets and call it home, Earthling Amanda Sumner sets out to become part of the planet's elite Guild. While he wants the Earthlings gone, Shifter Rhodry de Mendoza is reluctantly drawn to the fierce and lovely woman who's determined to prove herself. The pair is thrown together in what becomes a fight for their lives. And they might just lose everything–including each other–in their battle for the right to live in peace.

Emily Ross just wanted a fresh start. She’s a survivor, coming off the tail end of an abusive relationship, and craves time alone to learn who she is and to save the home that holds her heart. The last thing she needs is a controlling, alpha male calling all the shots. Meeting Kenric might just change her mind, though. He is wrong for her in all the right ways. But in order to keep her heart from breaking, he has to keep the hordes of evil vamps from stealing her very breath.

It's been two years since the virus first hit the country, and Jackson Hart watched almost everyone she loves die...or turn into zombies with an insatiable appetite for flesh. Luke Granger never expected to see another living human being, let alone that she'd be a fiery little thing who stirs his blood. Outnumbered by the dead, their only hope is to get the hell out of Chicago. Jackson and Luke finally have something to live for in a world Jackson and Luke finally have something to live for––if they can just survive the night. 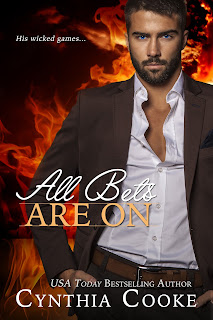 All Bets Are On

Derek Wescott, Prince of Hell, has just made a wager that he can entice the sweet yet plain Jaclyn Reynolds into bed before midnight. But Jaclyn is determined that it will be a cold day in Hell before she ever gets into his bed. So Derek offers her a friendly wager: he'll give her $10,000 if she can resist him on their date. Because he'll do just about anything to ensure that Jaclyn is completely—and infernally—his...