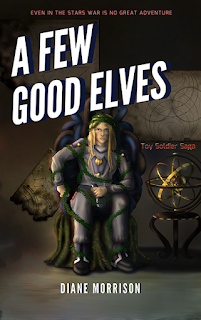 A Few Good Elves
Toy Soldier Saga
Book One
Diane Morrison
Genre: Science Fiction Fantasy, Military Science Fiction, Space Opera, Epic Fantasy, Dark Fantasy, Blackpowder Fantasy
Publisher: Aradia Publishing
Date of Publication: September 7, 2021
ISBN Ebook 978-1-9995757-5-5
ISBN Hardcover 978-1-9995757-4-8
ISBN Paperback 978-1-9995757-3-1
ASIN: B09D79BJW1
Number of pages: 490
Word Count: 155k
Cover Artist: Cayotica
Tagline: A dark blackpowder fantasy military space opera
About the Book:
Toy Soldier: A derogatory slang term for an elven marine.
Battles great and terrible, small and bitter, raged across Known Space as the wars of Elves and Orcs played out their legacy of hatred across the stars themselves. Epics would be written, songs would be sung; but wars are fought by real people with loves and families and homes.
All Shaundar Sunfall ever wanted to be was a Star-Pilot. Raised on his father's ship, he has found an affinity for the stars -- although as a mixed-race elf and a bit of troublemaker, he often runs afoul of his commanding officers.
Now the orcs have returned to once again wage war on their ancient enemies. The fate of his people is at stake. Although he is too young, Shaundar lies about his age to join up. But he is about to learn that no matter what the sagas say, war is no great adventure.
A bit like what would happen if Horatio Hornblower met the Honorverse, met Lord of the Rings, met Game of Thrones, A Few Good Elves is part naval adventure, part high fantasy, part space opera, and part war novel.
CW: graphic violence, sexual violence, torture, war, genocide
Watch the Book Trailer: https://youtu.be/7LG4_Jp9yfw
Purchase Links:
Amazon      Books2Read
Read an Excerpt:

All about on the decks of the Queen’s Dirk, the crew were running and screaming. There were too many dead and wounded to count, and the Chiurgeons had elves spread out over the tables in the mess, the garden, even the Captain’s bed.

Shaundar sensed Lieutenant Sylria on the remains of the fo’c’sle, now mostly a debris field, commanding the mages to ready spells and the weapons crews to continue their attack. He could also see the gravity well of the Vengeance, just now coming about on their starboard side, though he was certain that it had been much longer than they needed.

“I have the helm!” Shaundar cried.

“Get us out of here, Shaundar!”

He turned his head and studied the rapidly oncoming Balorian ship through both the hole in the starboard wall, and Queenie’s senses. Even with Sylria’s magical boost, he knew this to be hopeless.

“I can’t do it, Sylria,” he said in a hollow voice. “They’re just too fast.”
Sylria looked down at her feet for a long moment. She squared her shoulders. “Then we shall die with honour.”

Shaundar nodded. Amazingly, there was no fear, just sadness, that he would not see his family or Narissa again. “Sails, evasive manoeuvres!” Shaundar commanded. “Hard down!”

As the insectoid ship neared, it closed those claw-like limbs to grapple them. But under Shaundar’s power and direction, they dodged the attempt. Shaundar saw a whole army of armoured Balorian warriors pour out onto the deck and stand to the rails.

Sylria shrieked, “Mages, fire!” and she let off a lightning bolt herself. There were only a couple of elves left alive topside to obey Sylria’s command, but they responded. Flames and electricity washed over the orcs, enough that it stopped them in their tracks and aborted their boarding attempt.

“Bring ‘er about,” Shaundar ordered. “Hard astarboard!”
Queenie answered sluggishly with all the shorn rigging and shorthanded crew, but she came back around. As they swooped back towards each other, Sylria’s command rang out. Defiantly, the Queen’s Dirk fired another volley.

The Balorians greeted it with a broadside of their own as they both swung starboard at the last moment. The larboard ballistae both missed, but two of the three others dented the hull. The third pierced it once more on their larboard side with a ringing tear of sheet metal.

Their catapult did not fire at all. Whether it was because it was damaged, or because there were too few crew left to man it, Shaundar would never know.

The decapitated Vengeance had only one gun it could bring to bear on the pass, but it fired that larboards bombard at point blank range. The fo’c’sle simply collapsed like a sandcastle. Sylria was swallowed into the sinkhole. Shaundar roared in horror and pain but could not hear his own voice in the overwhelming noise.

There was no sail crew left to command, but hoping against hope, Shaundar bellowed anyway,

“Hard aport!” The mizzenmast was shorn away, and he knew it, but knowing there was nothing else to be done, he yelled out, “Prepare to ram! All hands brace for impact!” just as Garan had attempted.

He didn’t flinch as the Queen’s Dirk collided head-on with her foe. 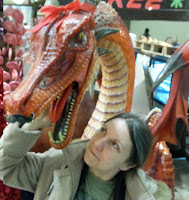 Diane Morrison lives with her partners in the Okanagan Valley, BC, where she was born and raised. She has been published in SFF markets such as Terra! Tara! Terror!, Air & Nothingness Press, and Cossmass Infinities. Under her pen name “Sable Aradia” she is a successful Pagan author, a musician, and a Twitch streamer and podcaster.  She likes pickles and bluegrass, and hates talking about herself. 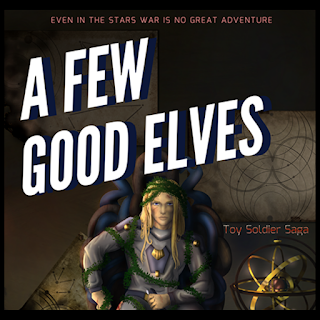