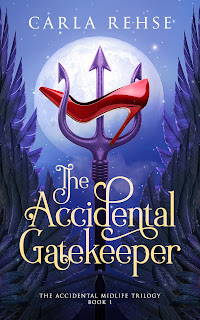 The Accidental Gatekeeper
The Accidental Midlife Trilogy
Book One
Carla Rehse
Genre: Paranormal Women’s Fiction
Publisher: Pink Squirrel Publishing
Date of Publication: 06/14/21
ASIN: 9798715331397
Number of pages: 299
Word Count: 82,880
Cover Artist: Damonza
Tagline: Turning the big four-five isn't a problem for Everly Popa—it’s everything else in her life that's gone to hell in a handbasket.
About the Book:
It's bad enough that Everly's drug-selling husband is in jail and her adult daughter blames her for the situation. But now the FBI wants her to turn witness, while her husband's criminal friends want to keep her permanently silent. With no other safe haven, Everly returns to her hometown. A place she hasn't visited in twenty-seven years. And didn't leave under the best of circumstances.
It’s not that Everly has a problem with her hometown, exactly, but since it sits next to Hell’s Gate, there's bound to be a few issues. Like the archaic rules set by the angels who run the town. Or the fact that the townsfolk feel Everly abandoned her duties as one of the members of the town's founding families. But between celestial politics or getting gunned down by a drug cartel, Everly decides to chance finding sanctuary back home.
After a little good-versus-evil stunt at the town's border, Everly is let back in and for the first five minutes, things are great. Everly's mom hasn't started nagging and she has a whole bottle of wine to herself. But after minute six, all hell breaks loose. Everly gets bitten by a hellhound, faints in front of her hot-and-single old high school boyfriend, and accidentally becomes the town’s Gatekeeper to Hell.  A job she never wanted, isn't trained for, and can't shake off like gum stuck to her shoe. And as much as she's flipping out, the celestial ruling body aren't too pleased about it either.
Before Everly can take a deep breath and figure a way out of this mess, an angel gets killed, humans go missing and the town shuts its magical borders. Now Everly is trapped inside with dying angels, rampaging demons, and a witch with a murderous agenda. Plus, an archangel and his army surround the city and are itching to contain the town's problems with a heaven-sent big boom. The only way out is for Everly to learn how to use her newly acquired Gatekeeper powers. But with no handbook provided, there's a snowball's chance in hell she'll figure it out in time.
Purchase from Amazon  https://amzn.to/355TwYg

When all the good choices have disappeared faster than kids at chore time
If eighteen was the age of exciting self-discovery, then forty-five was the weary age of having zero shits left to give.

What did it matter if my husband of twenty years was rotting in federal jail? And that our chiropractic clinic had gone belly up, leaving me jobless? Or that my friends had turned from “we’ll help hide a body” to “we’ve got your back until the reporters hit our lawn?” I also didn’t care that the DEA had frozen our joint bank accounts and seized our assets. I never liked that house anyway.

Add in a pickup truck, beer, and an old dog and it would be the most pathetic country song played on the tiniest fiddle ever. I gritted my teeth as the wipers shrieked across the windshield. Nothing like driving through a late-October downpour to add to your misery, and the constantly patched roads in this part of Central Texas didn’t handle rain well.

My phone rang with its cheerful tone that I kept forgetting to change. Sadie’s name lit up on the display, and I almost knocked it off the dashboard holder while hitting the speaker button.

“Sadie? Is everything okay? How’s Laney?” I really hoped the trembling in my voice wasn’t audible. My daughter hadn’t spoken to me in two months, refusing to answer my calls or respond to my texts. Her girlfriend had even gone so far as to block me on her social media.

“Mom? Where are you? God, this connection sucks.” Her voice had a recognizable anxious edge to it. I wanted to ask if she was taking her meds, but at twenty-one Sadie hated coddling. “Someone needs to talk to you.”

“What?” I eased onto the shoulder of the road, then placed the truck into park. “Who?”

“What the hell are you doing with my daughter?”

“Mrs. Collins?” He lowered his voice. “I know you’ve been advised not to speak with me. But you really need to before certain other people do. We can meet anywhere you want.”

“Listen to me, you scum licker. Tell my husband and his thug buddies to leave my kid out of their mess. I’m not afraid of their flaccid threats and won’t be intimidated.” I slapped at the phone to turn it off, sending it careening to the passenger floorboard, out of reach and therefore away from temptation.

I didn’t have the money to replace the stupid thing, but the desire to take out my frustration on the helpless and innocent electronic device was strong.

Part of me wanted to turn the vehicle around, race to Sadie’s apartment in Austin, and kick the crap out of that attorney. But I knew the truth. Sadie had taken her dad’s side and was angry I’d snitched on him. She would do whatever she could to get him out of trouble. What was a little money laundering for drug dealers, after all? She might have my dark hair and eyes, but unfortunately, she inherited her father’s defective moral compass.

A lesson for all the kiddies: choose the sperm donor for your progeny well. 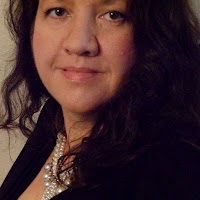 Meet the Author:
Carla holds a bachelor’s degree in psychology from Angelo State University. Although not a native Texan, Carla prides herself on having mastered the correct usage of the colloquialisms “y’all” and “bless your heart.”
Find out more about Carla and her books at carlarehse.com and connect with her @CRehse on Twitter.
www.carlarehse.com
https://twitter.com/CRehse 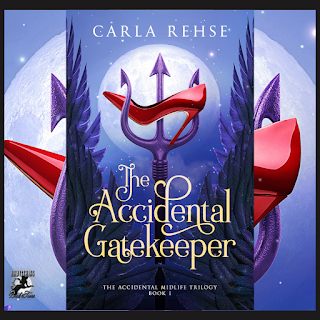