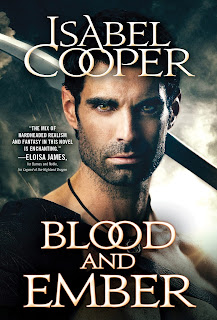 Sentinels spend their lives fighting the monsters that prey upon humanity.

A century ago, the Traitor God’s fury left the world broken by violent storms and twisted monsters born of darkness and death. Now those storms are sweeping across the continent again and it will take everything the armies of man can muster to survive. As a sworn knight, Olvir is prepared to do his part—even if that means journeying deep into the magic-tainted Battlefield to face the enemy alone.

Sentinel Vivian Bathari has lost too much to allow her closest friend to make such a sacrifice alone. Besides, there are whispers that Olvir’s strange new powers are somehow connected to the Traitor God, and she’d rather be by his side should the worst occur. But as they travel deep into the heart of danger, their growing attraction burns into mutual desire, and the true depth of Olvir’s connection to the evil haunting their world is made clear. In the end, Vivian will have to decide what she's willing to sacrifice to save their world…and the man she loves.

Fans of The Witcher and Ilona Andrews will love this epic tale of adventure and romance.

The dream left Olvir cold in the darkness. Sweat
coated his limbs, cooling rapidly in the spring night. He tasted blood in his mouth: he’d bitten his lip again.

None of it was new, but it was worse this time. His heart was thudding between his ribs and his chin. Images danced evilly in front of his open eyes. Not even the sound of three other knights snoring could make the memories seem as unreal as Olvir knew they were.

Dreams, he told himself, as Edda had told him when he was far younger. Nightmares had been different then: shapes outside the window, ghouls behind the house, the sort of stories youth repeated and parents could generally dispel with warm milk and a few words.

Olvir doubted that soothing words would’ve helped completely. He’d long since grown to prefer whiskey to warm milk, too, and a liquor-mazed head was the last thing he’d need the next day, particularly considering the quality of whiskey that went around the front lines.

It was a myth that Tinival’s knights never surrendered. The training was very clear about recognizing lost causes. Sleep, at that moment, was among them.

He disentangled himself from his sweat-dampened bedroll as quickly and quietly as he could manage. None of his companions stirred. It was funny: their alertness was legendary, but any experienced warrior grew accustomed to certain sounds. In camp, these included both snoring that could shake the earth and the noises of a tentmate trying to make a stealthy exit in the middle of the night.

Tinival hadn’t given them heroic bladders, after all.

Putting on armor would be more likely to rouse his tentmates, so Olvir simply tugged on his breeches, then picked up his boots and tunic in one hand. He carried the belt with his sword on it in the other. The camp was relatively peaceful, no attack expected, but there was no point tempting fate.

Edda had taught him that long before he’d entered the Silver Wind’s order as a page.

He stumbled outside into a chilly gray predawn. The remains of fires made the camp a little brighter but, at that hour, mostly just added smoke to the air. A flash of Olvir’s dreams sprang from fading memory to vivid detail with the odor. He sat down hard on a rock.

Vomiting would only waste rations, and the army had a strictly limited number of those. Screaming would only wake soldiers who had too little rest as it was. Olvir scrubbed his hands hard across his face, wishing that he could do the same to his mind, trying not to look too long at his hands themselves. They had been the worst part, and that had been a new element of the dream.

If your thoughts are sour, turn to deeds. It was another of Edda’s sayings. And Olvir was already sitting down. Getting dressed was the obvious next step.

He pulled on his boots, listening to the sounds near him. The camp was mostly still abed, but not entirely. Out of the three thousand or so souls who defended that part of Criwath’s border, fifty-odd were assigned to patrol the fortifications. Olvir could glance up and see two of them walking behind the wooden palisades, peering through cracks too small for arrows as they tried to spot any activity beyond. He could certainly hear their footsteps, regular drumbeats behind the irregular noise of snoring sleepers and shifting horses. Their presence was reassuring, but he’d have been a fool as well as an oaf to distract them.

A few rows of tents behind the defenders, the wounded slept restlessly. The Mourners, noncombatant servants of the Dark Lady whose domain included healing, kept their own vigil among them, watching for sudden declines. Letar’s priests were good company as a rule, but Olvir didn’t want to disturb the Mourners on their duty either.

There was always practice. The few sets of pells were barely holding together after rounds of recruits had trained with them, so by common agreement, nobody used them except those who truly did need help hitting their targets. Fighting the air, however, required only space. Olvir stood up and turned to retrieve his tunic.

A woman stood a few feet away from him.

That itself wouldn’t have been a surprise or a problem—a relief, though he wouldn’t have wished it, to find another who couldn’t sleep—but Olvir hadn’t heard her approach. Coming on top of his dream, it was more than he could reason through calmly. Before his brain caught up with his body, he’d hissed in a wary breath and reached for his sword.

As usual, Olvir recognized her voice before her face. He knew the tone in particular: soothing amusement. The words beneath the words were we can laugh about this, we’re laughing already, we wouldn’t be joking if it was any great matter.

He’d used that manner of speaking before, when the minutes before battle bit into the throat like wire, but he’d heard it most often from the woman in front of him: Vivian Bathari, commander of the Sentinels who held the border.

As was usual with the Sentinels, her clothes—dark, plain wool beneath a mail shirt—gave no indication of her rank. The gold-worked hilt of a greatsword over her shoulder, and the eye-sized sapphire set in it, made a striking contrast to that austerity.

The sword marked Vivian as a Sentinel. Its stone housed Ulamir, a spirit hundreds of years old.

Vivian’s face showed the other signs that she belonged to the Order of the Dawn: a half-circle of bloodred tears beneath each gray eye, glowing against her light-brown skin. The gods had reforged her, like they did all of her order, turning them into weapons. None who’d been through that process ever looked fully human again.

None, in truth, were.

Many feared the Sentinels, even as they relied on them, believing them too close to the monsters they killed. Olvir hadn’t been nervous around the Order’s members in more than a decade. He’d known Vivian for nearly half that time and depended too much on her to feel the slightest alarm once he recognized her.

Embarrassment was a different story.