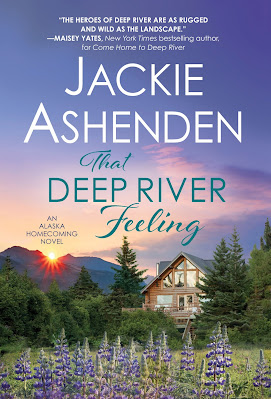 Jackie Ashenden brings the heat to Alaska in her contemporary romance featuring:

• An independent woman dedicated to protecting her town—and her heart

• A mysterious mountain man with a past shrouded in secrets

• A small Alaska town that’ll take your breath away

Zeke Calhoun doesn’t care much about Deep River, but he’ll do just about anything to keep the promise he made to look out for his best friend’s sister.

As the sole police officer in Deep River, Morgan West won’t be bossed around, but Zeke is irresistible. He’s tough, challenging, and all kinds of sexy, but getting involved is the last thing on her mind. Or is it…?

Jackie has been writing fiction since she was eleven years old. She used to balance her writing with the more serious job of librarianship until a chance meeting with another romance writer prompted her to devote herself to the true love of her heart – writing romance. She particularly likes to write dark, emotional stories with alpha heroes and kick-ass heroines. She lives in Auckland, New Zealand.

Taciturn and stubborn, Cal had told her about Zeke. A man of few words.

She gave him a more appraising look, the tug of curiosity deepening.

The way he’d twisted himself revealed that it wasn’t only his jeans that had holes in them. The faded black Henley he wore underneath his parka also had some holes, through which she could see bare, bronzed skin.

For some reason, the sight made heat rise in her cheeks.

She shoved it away, concentrating instead on the holes and not on the skin beneath it. Huh. Looked like he’d been living rough for quite some time, at least if the state of his clothes was anything to go by. Where had he been? And why?

Perhaps that was why he was also being such a stubborn, persistent ass. Perhaps he hadn’t been around people in a while. Sometimes that happened to hunters and trappers who’d been in the bush too long. They simply forgot how to interact.

Morgan’s annoyance, though intense while it lasted, never lingered, and it quickly faded now.

Out of the three of Cal’s friends he’d owned the supply and transport service Wild Alaska Aviation with, she knew Silas the best since Silas had grown up here. Damon was a transplant from LA, whom she’d only gotten to know once he’d moved to Deep River weeks earlier, but Zeke had remained an enigma, no matter what Cal had told her about him.

She wasn’t really a fan of enigmas, not when oil had been discovered in her town and she had people to protect. The townsfolk had taken the oil news pretty well and had successfully managed to resist the lure of the oil company flashing money about in return for their leases and drilling rights, yet it still paid to be vigilant.

Her family might not own the town anymore, but she still had a duty to it.

One of Cal’s friends wasn’t going to be a threat to the town. And hey, if he wanted to do a few odd jobs around the house, why not take advantage of the free labor? Especially when he seemed hellbent on doing them.

But he could give her a little something in return too. Information about himself for example.

Zeke shoved himself back from the fireplace and rose to his full height, dusting his hands off on his jeans. “Chimney’s good.”

“Well, thank God for that,” Morgan said. “I might have a giant stranger who doesn’t listen to a word I say in my house, but at least the chimney’s good.”

He studied her from beneath ridiculously long, thick black lashes and didn’t smile. “Yes, that’s what I said.”

Right, so in addition to being rude, he didn’t have a sense of humor as well. Had he somehow lost it out in the bush? Or had he never had one at all?

The curiosity inside her deepened further, along with a weird echo of the unsteadiness she’d felt out on the porch. A small flutter, like a firefly flying around in a jar.

Strange. She had no idea where that had come from.

“Where have you been, Zeke?” she asked. “And why are you here now?”

He hooked his thumbs into the pockets of his jeans, a classic dude pose. “I told you. I’m here because Caleb asked me.”

Morgan gave him her cop stare. “I’m afraid I’m going to need more than that.”