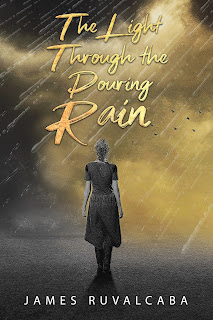 The Light Through the Pouring Rain
James Ruvalcaba
Genre: Love and Loss, Romance
Date of Publication: 12/21/2020
ISBN:979-8575160397
ASIN: B08PF23TF1
Number of pages:124
Word Count: 28,000
Cover Artist: Dar Albert
Tagline: A true story about a young couple's battle with cancer
About the Book:
An emotional page turner that gives a firsthand look into the lives of a young couple madly in love and eager to start their lives together, only to have it all halted by a cancer diagnosis.
With no clear road map on how to navigate their new normal, James and Anabel proceed into uncharted territory, hand-in-hand, with the love of their families and their faith in God to guide them.

It was April, and a couple months had passed by. At this point, everybody knew. Our friends and family knew and had been brainstorming on our game plan. Her first chemo session was April 2. Unfortunately, her family was not equipped to handle taking care of her. They had no experience with cancer and the pain that was upcoming. Unfortunately, my family and I had experience. Not that we wished we had, but it was an asset for this upcoming challenge. Cancer runs in our family. We’d lost our fair share of members, and the best place Anabel could recover was at our home. I had to talk to my family about the situation, and they agreed. My mom was the best man for the job. I couldn’t be more thankful for her. Mom was ready for the task at hand in a moment’s notice, without hesitation; she was the only one I could truly turn to in these times.

Anabel had gotten situated in our home. She stayed in my room with my brother and me. Which was a challenge in itself, due to him enjoying his senior year of high school, coming in and out of the house, partying it up, and having his friends over. We managed to make the best of it. At times it could be unbearable and make Anabel and me crazy, but the care and love that my brother had for her made it easier for us. He would be a pain in the ass, but had a soft spot for Anabel and would regulate things when Anabel needed some time. This was a challenge for Anabel and me as well. This cancer had rushed a huge step in our relationship: we had finally moved in together. It wasn’t the circumstances that we had imagined or planned for, but we had to make it work.

We had spoken on what location we would like to live in and how Anabel didn’t care much for where and how much, but only if she could decorate for each holiday. That was her only stipulation. “James, I don’t care what you say, I’m gonna go all out every holiday, and you can’t say a damn thing to me.” It was adorable. It would put a smile to my face, because she made a point to say that as if it would be a deal breaker.

We had established our routine. She would wake up early, around eight a.m., have coffee with my grandma and her dog in the backyard, and reminisce about my grandma’s glory days as a caretaker. Then I would wake up around ten a.m. to “Good morning, Meez!” Anabel called me Meez because my little brother would call me Jamies, and if you say the second syllable of Jamies, it sounds like “Meez.” So she ran with it. We would eat breakfast together and follow that up with some episodes of The Office. Then I would go to the gym for a couple of hours then return to her to relax, watch TV or movies with her on her phone, then eat dinner. My Mom would make, and repeat. A very simple routine, but effective due to the fatigue she would be experiencing from chemotherapy.

It may seem like a very bland routine for a normal person, but it was what she wanted. April 2 was fast approaching. After a couple of weeks, it was finally here.

At this time, I was working with special needs kids as an instructional aide. My work schedule was eight thirty a.m. to three p.m., typical school hours. Thanks to my mom, I was able to have some sort of income to take care of Anabel’s needs when she needed something. It wasn’t much, but it was something. Prior to leaving work, I gave her a speech: “Chemo ain’t got shit on you. It chose the wrong person to fuck with.” I felt like I was giving a speech in 300. She was amped, we kissed each other goodbye, and I was off to work. Later on at work, I got a text from my mom sending me a picture of Anabel during chemo, and she was all smiles with a thumbs-up. She looked way happier than anybody in that situation could possibly be, but she felt in her heart that chemo didn’t have shit on her. That was partially my fault for the speech I gave her in the morning, but it was funny to see somebody actually believe the words you say and run with it. I cracked a smile, thinking, This girl.

My mom explained the doctor’s orders and the game plan. Eight weeks of chemo, five days a week, which would be re-evaluated as needed until her tumor was small enough to do radiation, then surgery to remove it. We were all excited. The plan has been laid out, and with a plan that has a time frame, you are able to envision the light at the end of the tunnel, because the next day brings you that much closer to back to your normal life. Anabel and I smiled at each other with our eyes tearing up. We must’ve both been imagining our lives going back to normal.

Hello, I'm James Ruvalcaba. I began writing because I wanted to honor my fiancee Anabel's legacy and to be a testimony of God's goodness. On a personal level, I am a family man and hold them near and dear to me. I am a down to earth person that loves interactions and conversations. I believe the more we communicate the more we see the beauty of God's previous workings. Prior to being a writer, I worked with the special needs population for 10 years. I wanted to give back to the community and assist in achieving a higher quality of life as a tribute to my Sister who suffered from disabilities herself. 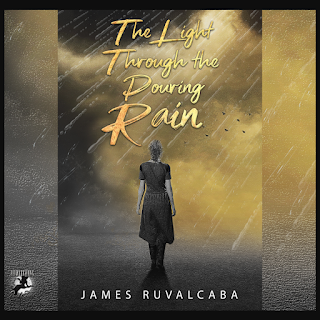