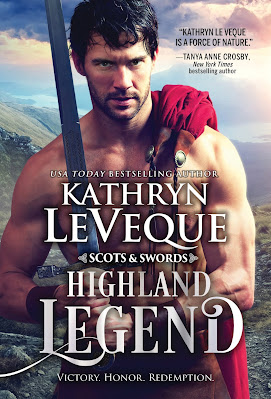 Magnus Stewart, aka “The Eagle” is the bastard son of a duke, and his royal blood has never been anything but a curse. Among the mystique and riches of the legendary fight club Ludus Caledonia, Magnus battles his way to the top.

Lady Diantha de Mora in desperation seeks his help. When Magnus reluctantly comes to her aid, his fate is changed forever in one night. With enemies at every turn, it’ll take muscle and a miracle for them to make it to the Highlands alive. There Magnus can reclaim his destiny, as Diantha reclaims his heart.

With over one hundred published novels, Kathryn Le Veque is a critically acclaimed USA Today bestselling author, a charter Amazon All-Star author, and a #1 bestselling, award-winning, multi-published author in Medieval Historical Romance and Contemporary Romance. She lives in California.

“What did ye put in my drink?”

The question came from Lor.

It was evening, a hush having fallen over the land as the night birds chattered and brooks through the glens sang their gentle song. In the complex of the Ludus Caledonia, it was time for the evening meal and although each competitor had his own stone cottage where he ate and slept, there was a small communal hall where men could gather and socialize.

Friendly gatherings weren’t widely encouraged because friends tended to not want to fight, and defeat, other friends. Isolation when not in the arena was urged, but sometimes on the nights when the Ludus Caledonia had no fights, the doctores and the senior warriors would gather and share a meal.

Tonight was one of those times.

It had been a perfect opportunity for Magnus to slip his friends the wine that had been steeped all afternoon with the silver pellet, but Lor was already on to him. Therefore, he replied confidently to the man’s question.

“What makes ye think I put anything in it?” he asked.

Lor pointed to one of the doctores, an Englishman named Wendell Stanhope. Wendell was bent over near the exit of the hall, vomiting onto the dirt floor. Magnus looked at him, unconcerned.

“What is wrong with him?” he asked.

Lor lifted a blond eyebrow. “He took my wine by mistake. What did ye put in it?”

Across the table, Bane was about to take a drink of his wine, but when he saw Wendell doubled over, his eyes widened and he quickly set the cup down.

“Idiot,” he hissed at Magnus. “Ye almost caught me with whatever ye’ve poisoned Wendell with.”

Sitting next to Bane, Galan looked at his half-empty cup of wine, realizing he’d been made a victim in Magnus’ nasty game. “Great Bleeding Christ,” he hissed. “Did you just poison me, Chicken?”

The Chicken nickname was a running joke among them. It was actually an affectionate term, with Magnus’ moniker being The Eagle, and his friends would tease him by calling him The Chicken.

But this was no teasing matter.

“Do ye not have more faith in me than that?” he said. “Ye may be English, but I wouldna poison ye. Not much, anyway.”

Galan could already feel something going to work in his belly. “Damn you,” he muttered. “What did you do, you Scottish bastard?”

Galan was beginning to sweat. “I’ll get you for this, Chicken. You’ll be very sorry.”

Magnus snorted. “Not as sorry as ye’ll be in a little while,” he said. “But have no fear. Ye’ll be fine on the morrow. But it’s going tae be a long night.”

As Galan grunted and grasped his belly, horrified, Bane and Lor were looking at him as if waiting for him to explode in all directions. Realizing Magnus may have gotten the upper hand on them wasn’t acceptable so Bane, wanting to create trouble for his smug friend, lifted his cup and called out to one of the newer warriors at The Cal.

“Tay,” he shouted across the hall. “Tay MacNaughton! Attend me!”

At the far end of the hall, a mountain of a man stood up and headed in their direction. Tay MacNaughton was not new to the Ludus Caledonia, but he hadn’t fought there in quite some time. Like Magnus, he was a professional fighter, having been in the fight guild system for several years. He and Magnus were old friends. They’d fought with, and against, each other.

Tay was one of the most formidable men at the fight guild, purely from his size. His father was Scots but his mother was from Constantinople, and Tay had the dark eyes and hair from the land of the Turks and a fluid, almost poetic, manner about him, but his temper and size were purely Scots. When Magnus saw the man heading over, the smirk vanished from his face.

“Dunna give it tae him, Bane,” he said seriously. “A joke is a joke, but Tay will rip yer arms from their sockets if he’s angry enough.”

Bane wasn’t intimidated. “I’ll tell him the wine is from ye.”

“But ye’re the one giving it tae him. Do ye want tae take that chance?”

He had a point. Bane had a wife and child he would very much like to see grow up. With a sigh of resignation, he set the wine down and purposely tipped it over.

“Och,” he said as Tay drew near. “I was going tae offer ye a drink, but it looks like I’ve been clumsy. Sit with us, man. I’ll send for more food and drink.”

Galan picked that moment to bolt up from the bench and make his way from the hall, hunched over as he walked. Everyone, including Tay, watched him go.

“What is wrong with him?” Tay asked in his deep baritone.

Magnus started chuckling. “Wine with a purge in it,” he said. Then, he pointed to the spilled wine. “Bane has been giving it tae everyone. Now he wanted tae give it tae ye.”

Tay looked at Bane accusingly, who’s eyes widened at the fact that he had been implicated as the culprit in Magnus’ vile scheme. He sighed heavily.

“Magnus,” he said deliberately. “Tell the man ye’re only jesting. I want tae see my child live tae be a man and if Tay thinks I’m going around poisoning people, that mayna happen.”

Magnus was still laughing, but he waved Tay off. “’Tis true,” he said. “I lied. ’Tis what we do around here – play very bad jokes on one another. But I can tell ye that I would die for every man at this table because they are honorable and worthy. Playing tricks on each other is how we show our love and devotion.”

A smile tugged at Tay’s lips. “Ye always were a twisted lad, Magnus.”

Tay’s grin bloomed as he sat down and Bane, convinced Tay wouldn’t try to throttle him, sat down next to him. They made Magnus give up the wine he’d been giving everyone, however, as he’d kept it tucked under his legs beneath the table. It was Axel, the Ludus Caledonia’s manager, who finally took the pitcher from him and tossed the contents out the door.

Once the wine was disposed of, it was forgotten, and they were back to laughing and jesting with one another, wondering how Galan and Wendell were faring. Both men had run into the privy and had yet to come out.

The apothecary’s purge was true to his word.

The meal that night was a stew with beef and lamb in it, rich with root vegetables. Men who fought as viciously as these men did required good food, and the food at the Ludus Caledonia was the best. In addition to the stew, they were copious amounts of bread and butter, stewed fruit, and a baked egg dish called a daryols. It was full of cheese and herbs, and was quite delicious.

Magnus was deep into his daryols when a sentry came through the entry. The sentries at the Ludus Caledonia were all highly trained men, mostly mercenaries, and they were extremely well paid. This man was the commander of the night watch. When he spied Magnus, he headed in his direction.

“M’lord,” he said. “We’ve captured a trespasser. She has asked for ye.”

Magnus’ mouth was full as he looked at the man. “She?” he repeated. He chewed a couple of times before swallowing what was in his mouth. “Who is it?”

The sentry shook his head. “She refuses tae give us her name.”

The other men at the table were listening. “It is probably one of yer past conquests,” Bane muttered. “She’s come back for more.”

Magnus cocked a dark eyebrow. “And why shouldna she?” he said. “Once a woman has a taste of me, I ruin all other men for them.”

The men snorted as Magnus returned his attention to the sentry. “No name?” he said. “Then I’m not interested.”

The sentry grinned. “Ye should be,” he said. “She’s beautiful. She fought like a banshee when we captured her and screamed at us in a language not English or Gaelic. One of my men said it was Spanish.”

Somewhere in the back of Magnus’ mind, the flame of recognition sparked. The first and only Spaniard who screamed like a banshee that he knew of was the very one he’d seen earlier in the day. Literally, the only one. He’d not seen the woman in over seven years and he never expected to see her again.

His curiosity had the better of him. Puzzled, he set his spoon down and stood up.