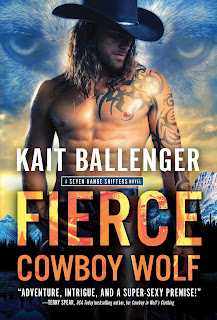 “What do you have to say for yourself, Packmaster?’ she growled.

And that alone sealed his decision.

He needed a wife of convenience, with no attachments or love—and who better than a she-wolf who hated him?

Maverick never backed down from a challenge.

His eyes flashed to his wolf as he met Sierra’s gaze head-on. ‘Marry me.”

Sierra Cavanaugh has triumphed to become the first female elite warrior in Grey Wolf history. All she needs is the pack council’s approval. But those stuffy, old wolves refuse to elect her unless she finds herself a mate.

Packmaster Maverick Grey was reconciled to spending the rest of his life alone. Now, all the Seven Range clans are working on a treaty, and he needs the elite warrior vacancy filled—and fast. If Sierra needs a mate, this is his chance to claim her. But Sierra has an agenda of her own for their union.

For these two rivals, the only thing more dangerous than fighting the enemy at their backs is resisting the attraction that’s building between them...

Kait Ballenger earned her B.A in English from Stetson University followed by an M.F.A in Writing from Spalding University. After stints in multiple careers, Kait finally decided that her eight-year-old self knew best: that she was meant to be a writer. Kait lives with her husband and young son in Florida.

Sierra Cavanaugh’s fist collided with her opponent’s cheekbone. A sting raked her knuckles despite the cloth sparring gear that padded her hands. Two more punches, a kick, and a sweep of her leg. Within seconds her opponent was laid flat, panting for breath in the mountain dirt beside Sierra’s cowgirl boots. Sierra smiled in satisfaction. Tonight was her night, and she intended to claim her victory.

Dakota raised up onto her elbows from where Sierra had annihilated her. “You’re unstoppable,” the other she-wolf slurred around her mouth guard. “You’ve got this.” Dakota ripped the guard from between her lips, sending an unladylike spray of spit into the dirt.

Sierra didn’t so much as blink. None of them did. Ladylike be damned. They didn’t owe a thing to anyone. Sierra extended a hand, helping Dakota to her feet. The other she-wolf let out a soft groan muffled by the thrum of feminine voices around them and the crackle of the roaring fire. The Grey Wolf female warriors had taken over the pack firepit tonight, driving out their male counterparts by sheer force of will, and okay…maybe a bit of friendly intimidation.

“You pack a hard wallop.” Dakota pawed at her jaw.

She was barely half Sierra’s size, but her stature made her formidably fast on her feet. Sierra had won by brute force.

Fierce and fiery, Dakota playfully punched her in the arm, muttering a few teasing, choice words.

They were all there with her, every one of the pack’s females. A swell of pride grew in Sierra’s chest. She couldn’t believe how lucky she was to call these strong women her sisters, not by blood but by choice.

“You’re so good the elders can’t ignore you.” The praise came from Naomi Calhoun, their second-in-command’s human mate, a former biologist turned rancher, as she pushed a cold bottle of Coors into Sierra’s hand. “Cheers.” She clinked the neck of her beer bottle with Sierra’s. “You’ll make an excellent elite warrior.”

Elite warrior. Sierra smiled. She intended to claim the title for herself tonight. It was confidential which of the current elite warriors had nominated her for the council’s consideration, but that failed to matter. She would be the first female of their kind to hold the title. Tonight, she was their fearless leader.

Sierra cast Naomi a teasing smile. “You’re only impressed because you’re a human.”

“Who you callin’ human?” Dakota’s eyes flashed to her wolf as she cast Sierra an impish grin. She tipped her Stetson back on her head to cover her mussed, dark hair. “Now when are you going to open the letter? I’m dying for you to open it.”

“Me too.” Cheyenne grabbed a Coors from the cooler, wiping the moisture that remained on the bottle across her track pants. Sierra shook her head. Cheyenne was always ready for a run. The other she-wolf’s endurance and drive were unstoppable.

Sierra wouldn’t have reached this moment without their support, without every time strong, fierce little Dakota reassured her, or every morning energetic Cheyenne woke her up at the ass crack of dawn and forced her to run all the way out past the stables. The other she-wolves raised their drinks as another round of howling ensued. Cowgirls didn’t take no for an answer.

“Okay, okay.” Sierra removed the letter from her back pocket. She’d been itching to open it, but she’d wanted to wait until they were all together.

The envelope had arrived in her ranch mailbox this morning, only two days after the Elder Council meeting, which meant their decision had been a quick one. Tentatively, she stared down at the cream-colored paper glowing orange in the firelight. Silence fell over the warriors as the air buzzed with quiet anticipation.

With a deep breath, Sierra ripped open the envelope and unfolded the letter, her eyes scanning over the block of text. She’d known from the start she had to be stronger, faster, better than all of the males for the pack to even have her name put forth to the elders for consideration.

And she had been.

But still, it wasn’t enough.

Her stomach churned as the message sank in. Desperately, she fought to keep her hands from shaking as she forced herself to look up at her fellow females. Her eyes scanned over the crowd of women around her. She’d been their best chance, the leader upon which they’d hung their collective hopes.

And she’d failed them.

Shame built in her chest, a sinking feeling that pulled at her stomach as she felt hot tears catch in her throat, too large for her to swallow, but she would hold them in anyway. She refused to cry, because Sierra Cavanaugh did not cry. She hadn’t shed a single tear in years. Not since the last time she’d allowed her emotions, her fear and weakness, to get the best of her.

When she finally managed to speak she was distant, calm, measured, not showing any of the tumultuous feelings raging inside her. “They denied my application.”

A murmur of righteous outrage broke out among the women.

“For what reason?” Dakota snarled.

Sierra knew her next words would only spark their anger further because as far as she was concerned, as far as they all were concerned, there was no adequate explanation.

“Because I don’t have a mate.”

The silence was deafening.

The collective disappointment mixed with fury in her packmates’ expressions cut her worse than a thousand knives, worse than the words or decisions of any group of sexist elders ever could.

They’d all known the pack’s unspoken expectation of alpha females of pure bloodline: to mate with an alpha male and further the pack’s longevity. It was a narrative born of evolutionary necessity as old as the true wolves from which they’d descended, and yet, they’d thought they had moved beyond that. They thought if they played by every one of the pack’s ridiculous rules to prove themselves, and if they forced the elders to speak those archaic expectations aloud, the pack’s ancient ways would bend to the will of progress.

Without another word, Sierra ripped the letter in two and threw the remnants into the firepit. The paper burned and blackened, quickly turning to ash. “Where is he?” She didn’t need to specify which he for her fellow warriors to instantly know who she meant.

“He was in his office when Wes—” Naomi answered.

Sierra didn’t pay attention to the rest of the statement. She was too focused on her goal to care. She was already striding toward the compound, the epicenter of the ranch.

“What are you going to do?” Dakota called after her.

For a moment, Sierra paused. Slowly, she inhaled a deep breath before she turned back toward them, looking from face to face of each woman around her who’d put their faith in her, trusted her with their dream. She’d never forget their righteous anger—and she would use it as fuel. “I’m going to do what I always do. I’m going to fight, and I’m going to win.”

And she knew exactly the alpha upon which she planned to lay siege.