About The Time for Murder is Meow: 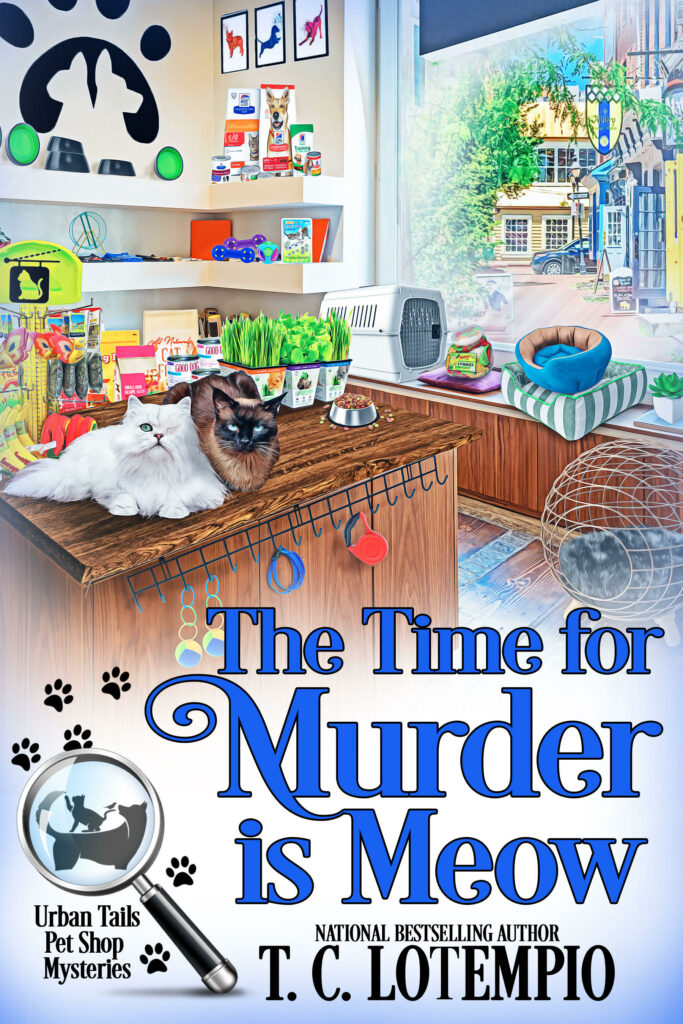 Publisher: Beyond the Page Publishing

Shell McMillan and her furry sidekicks aren’t kitten around when they set out to catch a killer . . .

When her TV series is canceled, struggling actress Shell McMillan considers it a blessing in disguise. A beloved aunt who recently died left her a pet shop in her will, and she sees it as the perfect chance to walk away from Hollywood and make a fresh start in the sleepy town of Fox Hollow.

But adjusting to small-town life won’t be easy, as Shell realizes when the head of the museum board is found murdered not long after Shell had a very public argument with her. And when the new kid in town is fingered for the crime, she’ll have to rely on her own wit and pluck and the kindness of strangers to get herself off the hook.

Desperate to exonerate herself and catch the real culprit, Shell begins digging into the lives of the local residents, and she quickly discovers that the victim had no shortage of enemies. As the suspect list grows and time runs short, Shell and her cats will have to claw their way out of danger—and it’s meow or never . . .

I originally reviewed the first edition of The Time for Murder is Meow in 2019 and loved it. I'm currently reading through the second edition and will update my review on Goodreads and Amazon if I feel it needs to be. You can currently read my review at https://www.goodreads.com/review/show/2929216086.
The world created by the author is described well and I was able to visualize the setting, characters, and scenes. I enjoyed the characters, setting, and path taken for the reveal. The character development was done well. We get a good look at Shell’s character, who she is, why she’s back in CT, and past relationships – boyfriends, co-stars, and managers, etc. Shell meets a lot of people in this book and the characters are written well.

While Toni Lotempio does not commit – or solve – murders in real life, she has no trouble doing it on paper. Her lifelong love of mysteries began early on when she was introduced to her first Nancy Drew mystery at age 10 – The Secret in the Old Attic. She and her cat pen the Nick and Nora mystery series originally from Berkley Prime Crime and now with Beyond the Page Publishing. They also write the Cat Rescue series from Crooked Lane and the Pet Shop series, originally published by Midnight Ink and rebranded in June of this year as “Urban Tails Pet Shop Mysteries.” Book 1 will be re-released in June with a brand new cover! The series is continued in 2022 with book two, KILLERS OF A FEATHER, from Beyond the Page. Catch up with them at ROCCO’s blog, www.catsbooksmorecats.blogspot.com or her website, www.tclotempio.net