This post is part of a virtual book tour organized by Goddess Fish Promotions. Kirsten Weiss will be awarding a $10 Amazon or B/N GC to a randomly drawn winner via rafflecopter during the tour. Click on the tour banner to see the other stops on the tour.

Three Witches and a Metaphysical Detective… 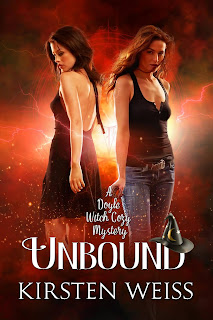 Riga just wants to mentor three young witches and go home. Doyle witch Jayce wouldn’t take help if it landed on her. But when a man is murdered in front of their eyes, these two must learn to work together. Because a dead man is the least of their worries… Jayce Bonheim loves magic and Doyle, California. But she and her small town have been paying a deadly price for the fairy gate she and her sisters can’t close. Now, a society of dark magicians has returned to town, a deadly winged monster has come through the gate, and an old friend has been murdered. And the new mentor who’s supposed to help Jayce and her sisters seems to have an agenda of her own…

It was supposed to be a simple training gig for Riga Hayworth, not a murder investigation. Still reeling from a tragic mistake in her past, she’s determined to stay retired. But the murder and the town’s magic seem tied together. Can Riga resist the lure of an investigation?

When the Devil appeared to Riga, she laughed.

Not bravely. Not sardonically. Hysterically.

His skin had a parboiled look. He was naked, and looked like something out of an old horror film, his horns curving backward like a mountain goat’s. She learned later that laughter is a normal reaction to the Devil. But at the time, she just figured things had gone very wrong.

Exactly what had gone wrong… Well, there were several options available.

Three days earlier, she’d received a letter from an elderly magician requesting her appearance in Doyle.

Riga had ignored the letter.

She was no longer a metaphysical detective and couldn’t leave her children, only seventeen months old and already bursting with magic.

The next night, the magician, Mrs. Steinberg, called.

Riga had said no again. Bafflingly, a year ago her familiar had turned into a human. And you don’t leave an ex-gargoyle running amuck in human form without supervision.

Last night, Mrs. Steinberg called again. Riga had again said… no. Thanks. Really. Still retired from detecting. And her husband was having some tricky dealings with the government. She couldn’t possibly leave.

And then the Devil appeared.

About the Author:
Kirsten Weiss has never met a dessert she didn’t like, and her guilty pleasures are watching Ghost Whisperer re-runs and drinking red wine. The latter gives her heartburn, but she drinks it anyway.

Now based in Colorado Springs, CO, she writes genre-blending cozy mystery, supernatural and steampunk suspense, mixing her experiences and imagination to create vivid worlds of fun and enchantment.