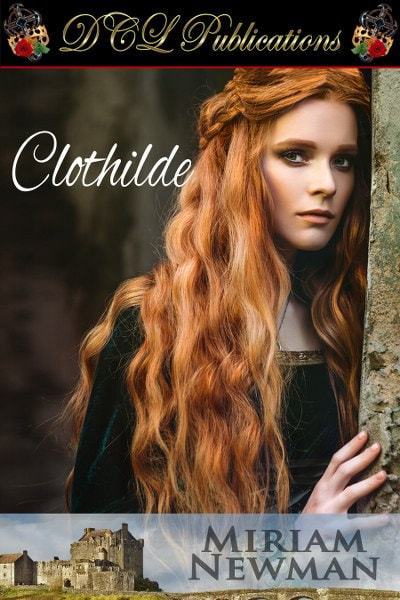 Daughter of Norman aristocrats, Clothilde du Flaumier is hopelessly in love with the illegitimate son of a nobleman. Her father will never countenance their marriage, nor does the object of her affections want one. But who else is there for such a stubborn, reckless girl?
Add to Goodreads
Read an Excerpt:

It was no huge affair like Cecile’s, but a small family wedding. Still that meant guests in the mansion house and the tower. Dressed in her wedding finery, a bottle green velvet gown faced in gold cloth, Clothilde left them behind to descend the steps into the lowest level of the tower where they had a cell. It was dank and musty, only dimly lit by flickering torches and probably black as pitch if no one remembered to light them. She could not remember at that point how long Dain had been there.

He did not look bad—not tortured, not starved or beaten, just detained. For which God be praised, she thought, as angry as Guie had been. Still, he had not abused his prisoner and many would have. Dain was astonished to see her, rising from his cot in the bare cell as if seeing a vision. Clothilde supposed she did appear far different from the blowsy creature he had taken for a maid. If he looked wary, it was small wonder.

From one of her voluminous sleeves she took the key Estman had given her. Dain had not said a word.

“You are released,” she said, swinging the door open.

“How is that?” Their prisoner was justifiably confused. From her other sleeve, Clothilde drew out a purse.

“Today I am marrying Sir Estman. He is the one you saw in the road with my brother-in-law, the day you were taken.”

Dain gave her a slight smile. “Never would I have taken you for Lord Hugo’s daughter. You seemed more like one of us, you understand. If I’d just known.”

“Well, I didn’t wish you to know,” she said briskly. “For my wedding gift, Estman has given me your freedom.” She glanced down at the purse in her hands. “And your reward. Go back to your cottage, Dain. You have enough money now for a fresh start. No more smuggling. You’ll only get killed that way and your sister needs you.”

“Tis only a wedding gift,” she said, as if it didn’t signify. In reality, she knew exactly what it meant—a man’s life. She had never understood that she held that kind of power, simply because she had been born into a particular family.

“So you’re to be married?” he mused, looking at her and taking the purse. “I do recall, now you mention it, they threatened you with it that day. Meant it, did they?”

She smiled tightly. Somehow this simple man understood more than her own family did, probably because he had been the victim of people like them all his life. She had never thought she would be.

“These lands and titles do not come without a price.”

Fantasy poetry driven by myths and legends has been my passion for as long as I can remember. I was published in poetry before catching the romance writing bug. I bring that background to my writing along with a lifelong addiction to horses, an 18 year career in various areas of psychiatric social services and many trips to Ireland, where I nurture my muse. My published works range from contemporary fantasy romance to fantasy historical, futuristic, science fiction and historical romance. Currently I live in rural Pennsylvania with a "motley crew" of rescue animals.
Website * Facebook * Twitter * Bookbub * Amazon * Goodreads

Follow the tour HERE for special content and a giveaway!
$15 Amazon giftcard,
ebook of 'Flame of Normandy' - Book 1 in The Comet Trilogy
-1 winner each
a Rafflecopter giveaway