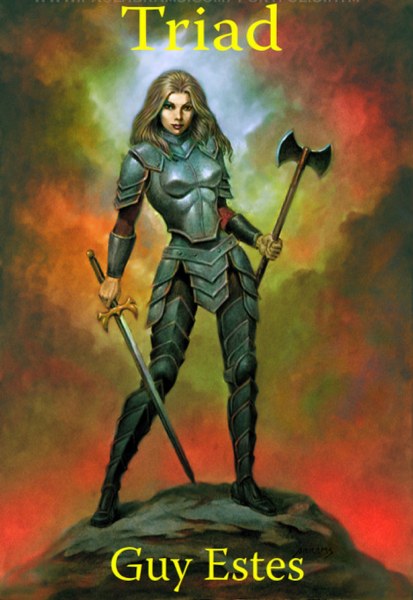 Triad
Sisters of the Storm Book 1

It's one thing to be gifted by the gods. It's another thing entirely to figure out how to use that gift.
Three of them are born at once. Some say they are gifted - Chosen - by the gods. Others say they are so aberrant even the gods cannot stop them from existing. Three of them living at once is unprecedented... and dreaded.
Aleena is a gifted warrior who only wants the world to leave her alone. Anlon is an equally gifted warrior who wants the world under his boot. Baezha is a gifted witch whose intentions are unknown, even to her. Both Aleena and Anlon are skilled, proud and jealous. Their rivalry is inevitable, yet Aleena knows Anlon is a brother in addition to a rival. Jealousy, mercy, forgiveness and vengeance threaten to consume all she loves.
Yet what of the third Chosen, Baezha, a powerful sorceress quietly watching the other two? And will the gathering of this triad result in balancing the equation into order or unbalancing it into further madness?
Add to Goodreads * Purchase from Amazon https://amzn.to/3pYbLIY 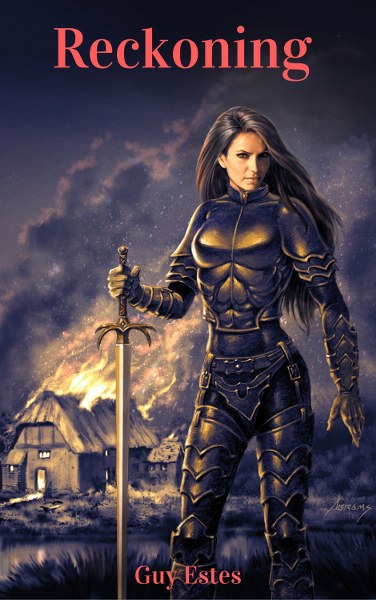 Reckoning
Sisters of the Storm Book 2

She won’t hesitate to take on any demon from any of the seven hells, but none of them are as terrifying as the ones in her own mind.
Baezha Ambrose is a gifted sorceress. Aleena Kurrin, her adoptive sister, is a gifted warrior. Together they have faced countless foes, but now Baezha must face what she fears the most – her past. She’d fled her home town of Oleppo after her world ended in fire and blood and left her crippled with guilt. In the years since, the forces that destroyed her world have taken over Oleppo and grown stronger. Now she must return to Oleppo to sort things out.
The Watchers is a secret society of religious zealots fanatically devoted to the extinction of magic. Baezha’s extraordinary talent with magic makes her their most hated enemy, and they bring all of their obsessive fanaticism to bear on her. The Order of Entropy is a faction of sorcerers dedicated to destructive magic. They see Baezha as an intolerably dangerous rival, and they know precisely how to hurt her. They know her sordid past better than Baezha herself.
Crippled by guilt and fighting a two front war in a city that has made her very existence a crime, Baezha will need all the help she can get. She has but one ally, her sister Chosen, Aleena, who is as powerful in war as Baezha is in magic. With Aleena’s help, Baezha shall bring a reckoning to the evil that destroyed all she loved. Or that evil will have its final victory over her.
Though listed as book 2 of the series, this is a stand alone novel.
Add to Goodreads * Purchase from Amazon https://amzn.to/3pYbLIY 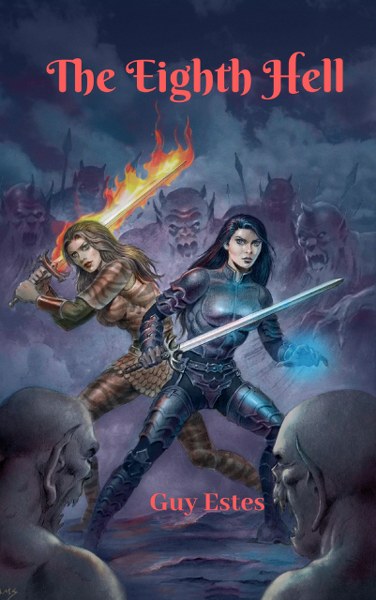 The Eighth Hell
Sisters of the Storm Book 3

The most dangerous women in the world dare the most dangerous place in the world.
The Shingora, a place known and dreaded by all, the name driving those who hear it to mutter prayers and make signs for protection. None who have gone to that island ever came back… until now.
The trade guilds sent an expedition there, hoping to find a wellspring of natural resources. Only one man returned, his experience having reduced him to gibbering madness. Now the guilds are sending a new expedition, three hundred strong and armed for war, to learn the fate of the previous one and rescue the survivors… if there are any.
Joining them are the Chosen sisters: Aleena Kurrin, the Battle Queen, gifted by the gods in war, and Baezha Ambrose, the Witch Queen, gifted by the gods in magic. Sworn to recover any survivors, they are joined by a host of new friends and brave an island teeming with bizarre creatures. And on the Shingora, everything kills.
Yet an even darker discovery awaits them in the Shingora’s depths, an unnatural horror far worse than anything the island’s sinister reputation ever hinted at. And while immersed in all the island’s perils, a traitor threatens the company from within. With treacherous enemies at their backs and engulfed by a horde of abominations, the sisters will be tested as they’ve never been tested before… and even those Chosen by the gods have their breaking point.
Though listed as book 3 in a series, this is a stand-alone novel.
Add to Goodreads * Purchase from Amazon https://amzn.to/3pYbLIY 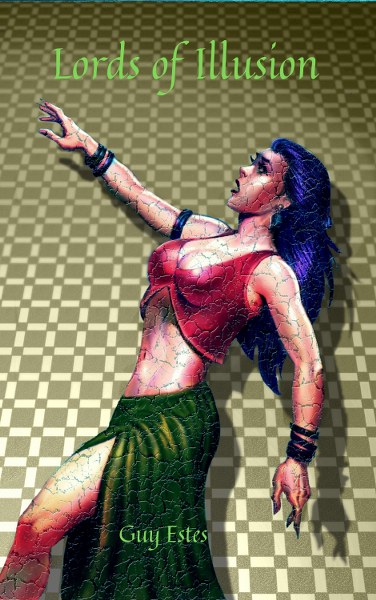 Lords of Illusion
Sisters of the Storm Book 4

The Shrouded Masks, a sect of assassins feared above all others because they have a unique advantage – they’re doppelgangers, giving them perfect disguises. Everyone thought they were exterminated decades ago. Everyone was wrong.
They have returned from the brink of extinction seeking vengeance against those who sent them there – the royal family of Bukahr. To protect themselves from assassins who can take the forms of their most trusted people, the royals hire two who are not easily impersonated, the Death Queens – Aleena Kurrin, gifted warrior, and her adoptive sister, Baezha Ambrose, gifted sorceress. But things aren’t as simple as they first appear.
The masks the royals present to their adoring public are much prettier than the faces that wear them. For them, appearances trump everything, including Aleena’s strategic advice, making a difficult job even more difficult, and Baezha is sure they are keeping secrets that could prove vital. As Aleena learns about their adversaries, she discovers the relationship between the royals and the assassins may not be as simple as the king said, and she suspects the assassins want something more than blood vengeance, something worse than murder.
Add a secretive king, a haughty queen, a scheming princess, an arrogant prince, and a hostile guard captain to shapeshifting assassins and the sisters are once more tasked with the impossible. And if Aleena is right, the Shrouded Masks intend something far worse than their deaths.
Though listed as Book 4 in a series, this is a stand-alone novel.
Add to Goodreads * Purchase from Amazon https://amzn.to/3pYbLIY 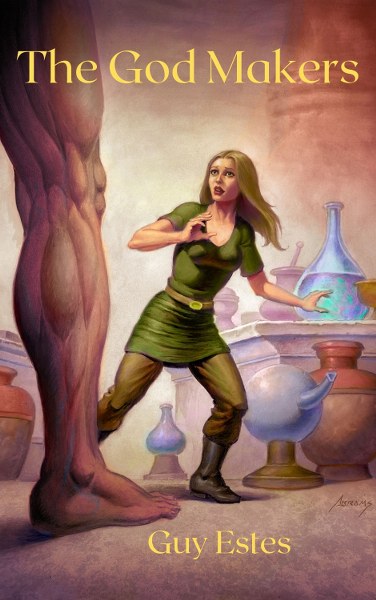 The God Makers
Sisters of the Storm Book 5

The problem with trying to trap the Death Queens is you run the risk of succeeding.
Over a year ago, Aleena Kurrin, divinely gifted warrior, and her adoptive sister, Baezha Ambrose, divinely gifted sorceress, faced the unnatural monsters of the Shingora – the Eighth Hell. The sisters triumphed, but their victory felt hollow, their souls scarred by guilt – though they saved many people, they failed others, something for which they cannot forgive themselves. Making things worse is the fact that the mysterious alchemists responsible for creating those monsters remain unknown… or do they?
A group of alchemists calling themselves the God Makers has set up shop just outside the alchemists’ guild’s jurisdiction, and they sound exactly like those who created the abominations on the Shingora. Haunted by their failures on the Shingora, the sisters must know for certain if the God Makers are who they fear, and if so, put them out of business. Permanently.
But when they get to the God Makers’ lair, they discover their fears fell short of reality. The God Makers’ master, Arleth, means to show the world just what they’re capable of, threatening a city and the sisters’ loved ones in the process. And the sisters would make an invaluable addition to his ranks… whether they want to or not.
To save their loved ones and a city of innocent people, the sisters chosen by the gods challenge those who would create gods, all while trying to accomplish the most difficult task of all – forgiving themselves.
Though based on the events in Book 3, this is a stand-alone novel and can be read without first reading the others.
Add to Goodreads * Purchase from Amazon https://amzn.to/3pYbLIY 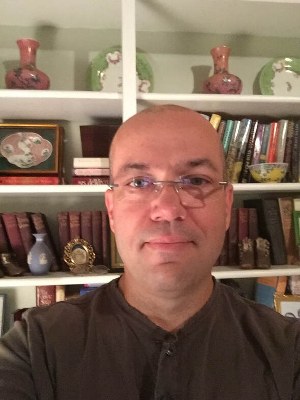 Guy Estes was born in Huntsville, Alabama in 1970 and grew up on his family's ancestral sugar plantation in New Iberia, Louisiana, where he currently resides with his wife and three children. His children are the seventh generation of his family to grow up on the place, which was occupied by Union troops during the Civil War. He has a bachelor's degree in social studies education and a master's degree in European history. His day job is an instructor at a small safety consultation company. He taught public school for three years and, as a result, no longer fears hell.
Website * Facebook * Facebook * Goodreads