The Rake and the Bishop’s Daughter by Julia Donner 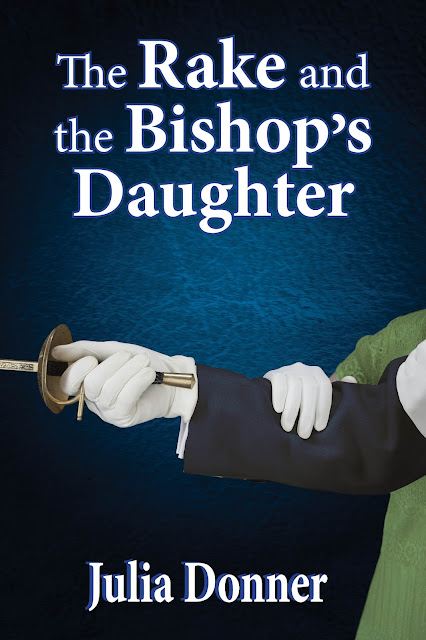 Society’s beloved wastrel, Sir Harry Collyns, pushes his popularity past the point of acceptability when he poses for a statue that creates a social uproar. People line up for blocks to see Handsome Harry in the nude, sculpted by a female artist! Bored with the fuss and scandal, Harry hitches up his fastest team, heads for the country, and a near fatal curricle accident. When the bandages are removed from his head days later, he discovers the angel-voiced widow who’d cared for him is neither elderly nor as mild as her tone, but a straight-laced do-gooder unimpressed with his flamboyant past and dashing good looks. Head-battered and heading for a broken heart, he falls into love with Widow Olivia St. Clair, who might be the one woman in England that Harry can’t charm into loving him back.

He leaned closer to say, “I should warn you that it’s her first time with a lady’s saddle, but from what you’d said at Beechgate, I had the impression you were an accomplished rider.”

His chest pressed against her leg. His free hand grasped her left ankle in the pretense of making sure her foot was secure in the stirrup. His grip conveyed the strength of a possessive grasp that sent a tingle up her leg. Other than lifting her up in the saddle, they hadn’t touched in months. His meaning-filled gaze and the simple, silent suggestion inherent in his grip made her heart pound.

A knowing smile curved his lips. He stepped back, and said over his shoulder, “No, it’s you who are making her nervous. She senses your excitement, which is all that I hoped. I’ve been praying that what we shared at Beechgate was not merely an interlude to relieve boredom on your part.”

As he mounted his horse, she felt her eyes widen into a stare of disbelief. How could he ever think what they shared would be perceived on her part as perfunctory or ordinary? Perhaps it had been so for him. He’d had countless affairs with beautiful, fascinating women. The notion that she wouldn’t find him irresistible left her boggled.

Before she could devise a response to his ridiculous remark, he said, “Once we get to the park, I’ll tell you what I discussed with your father. I waited, of course, until the contracts were signed, to speak my mind.”

Olivia jerked her attention away from Harry to the street. Oh, dear. He spoke his mind to Father? That gave her something to worry about as they rode to Hyde Park.

Julia Donner (aka M.L.Rigdon) grew up in historic Galena, IL, USA, and spent most of her time in the museum of her aunt, who encouraged her interest in history and understood the need to cherish a dream. She started writing in secret in her teens and never stopped, merging it with her mother's encouragement to study theater and music, which led to performing in the Midwest, California and as far away as Austria.

Donner never forgot what it was like to write alone as a girl and is a happy member of Summit City Scribes. Concern for the failing educational system led her to develop Your Futures in Ink, a panel of local and regional authors, who go into to schools to encourage students and answer questions about writing.

THE TIGRESSE AND THE RAVEN, first book in the regency Friendship Series, is an RWA contest finalist. The ninth book in the series, A ROGUE FOR MISS PRIM and the tenth, AN AMERICAN FOR AGNES, are available now. A LAIRD’S PROMISE will be released by Spring 2018. 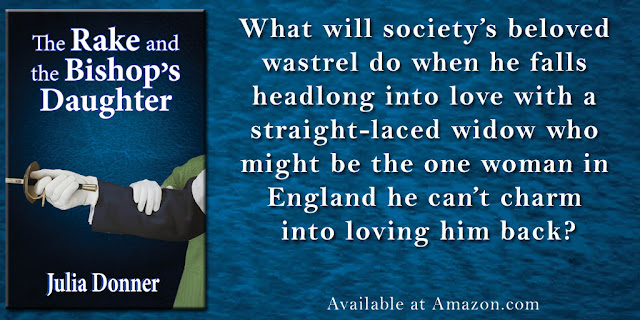 Julia will be awarding a $30 Amazon or B/N GC to a randomly drawn winner via rafflecopter during the tour.