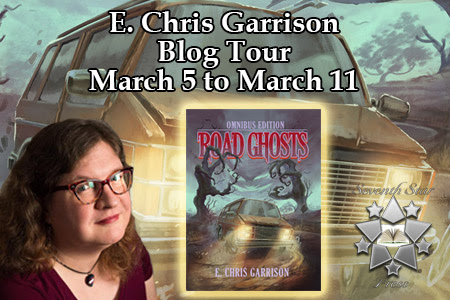 Please Welcome E. Chris Garrison to the blog as she talks about her Top Ten Favorite Supernatural Episodes:

"Carry on Wayward Son" by Kansas plays. Viewer is helpless as they crank up the volume. Scenes of demons, ghosts, and ghouls flash by, punctuated by a van going off the road, a gun being fired, ejecting a ghost from a body, and two women at a table crying "BACON!" in unison.

Okay, I admit it, I'm a hopeless fanatic for the Supernatural TV series. I've been watching with my wife since it began in 2005. And though my Road Ghosts series began with a premise of "a haunted road trip" in late 2007, I didn't consciously pattern it after Supernatural. There's a lot that's similar, both being in the urban fantasy genre, with ghosts, ghouls, and demons being countered by humor and strong bonds between the characters.

I suspect these similarities are why I was asked to talk about my top ten Supernatural episodes. I'm sure you'll notice a theme here; my favorites are the funny episodes of the show, the ones where they can laugh in the face of evil, or just poke fun at the show itself. I've listed my ten favorites in no particular order below. Out of fan courtesy, I've avoided references to the past couple of seasons to keep from spoiling the show for anyone.

1. The Monster at the End of this Book (S4E18) Some people may not like the occasional self-referential nature of the show, but I love it. The idea of a prophet being a hack author who writes what will happen in the Winchesters' lives through his visions is wonderful and hilarious. I really like Chuck as a character, and yes, I do love where the show eventually takes him (spoilers!). As a writer, seeing that series of books as tangible things made me squee.


2. A Very Supernatural Christmas (S3E08) I grew up in a time when the SPECIAL animation at the beginning of this episode was used before holiday specials, and it hit my nostalgia nerve just right to see it again. The horrifying parts of this one are in complete contrast to that expectation and Christmas-themed shows in general. The mushy part at the end where the boys make their own version of Christmas is the perfect amount of sentiment to offset the bloody horror of the confrontation with the monsters.

3. Changing Channels (S5E08) This was pure indulgence, breaking away the monster of the week and heavier Armageddon plot for some comic relief as the Trickster tortures the boys by forcing them to play their roles in various TV shows.

4. The Real Ghostbusters (S5E09) This one mashes up fan conventions, "how to host a murder" style larping, and an actual haunting, with the Winchesters hampered and helped by cosplay versions of themselves. After seeing this episode, I couldn't help but notice the forced low pitch gruffness of the characters, especially compared to the first season or two.

5. Ghostfacers (S3E13) Confession: My Road Ghosts books have the "haunted roadtrip" theme in part because my wife and I were part of an amateur paranormal investigations club from 2003-2010. We went out month after month to try to gather evidence of hauntings at various historic locations. Our club's T-shirts read, "You do WHAT?" on them because that was a common reaction. It was fun, we made a lot of friends, and also had some possibly paranormal experiences along the way. So, seeing the Ghostfacers as the worst of that kind of club made us howl with laughter; funny because of the exaggeration of the kind of reality shows that came out of the ghost hunting hobby.

6. Dog Dean Afternoon (S9E05) I can't help but love the over the top nature of this episode. Dean has rapport with a dog they needed to talk to as a witness, and ends up experiencing all the tropes of being a dog, from yelling at the mailman to fetching things Sam throws across the room. The villain as a vivisectionist is particularly nauseating and horrifying, so the humor is needed as a balance.

7. The French Mistake (S6E15) The fourth wall is shattered and lies in ruins for this episode, where Sam and Dean find themselves in a non-magical world where their lives as they know them are just a TV show, and they are actors. It's funny how much they dislike their actor selves, and Misha Collins is amusing as a parody of his real-life self. I'll say it was funny for a one off, but I really wanted the boys to get back to their job hunting things, saving people.

8. It's a Terrible Life (S4E17) In the same vein, it was both funny and depressing to see Dean and Sam pressed into office jobs. I couldn't help but cheer when they found a "case" anyway, managing to figure out some basics and vanquish a corporate ghost, proving that hunting is in their blood no matter what.

9. Mystery Spot (S3E11) I'm not saying I really want to see Dean die over and over in a deadly Groundhog Day like scenario, but it sure was entertaining the way it was done. I loved all the various attempts Sam made to get the bottom of the mystery, all the while watching helplessly as his brother is killed in new and inventive ways.

10. Fan Fiction (S10E05) I don't know about you, but when the cast sings Carry On at the end, I burst into tears every time I watch this one. It's a favorite that I have revisited many times. It's a little like the Buffy Musical, you wouldn't want to show this to someone who's never seen the show before, because they'd be utterly lost, and wouldn't get any of the references/jokes. But I love how it gently pokes fun at the fans and the wild places the show takes us. Full disclosure: I kinda DO want to see robots and Dean as a woman as in the girls' vision for how the series continued.

If you're with me this far, congratulations, chances are you're also a die-hard Supernatural fan. The Road Ghosts Trilogy isn't Supernatural fan fiction by any stretch of the imagination, but it certainly was influenced by the show, especially in mixing urban fantasy / horror with a generous amount of humor. 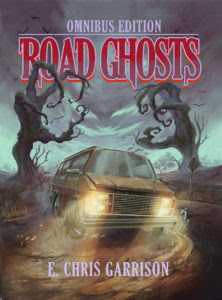 Somewhere Between Scooby-Doo and Supernatural The Road Ghosts Trilogy introduced readers to E. Chris Garrison, one of speculative fiction’s most gifted voices. Presented here for the first time in a single volume, you’ll meet amateur ghost hunters Brett and Liz, along with their friends Gonzo, Jimbo, and Frannie. Go along for the ride as the gang chases ghosts and battles demons, ghouls, and stranger things up and down the interstate highways of the Midwest. The Road Ghosts Trilogy spawned several short stories (such as “Spectral Delivery,” included here!) and introduces readers to “Skye” MacLeod, whose adventures continue in Garrison’s popular Tipsy Fairy Tales Series. This omnibus volume includes: Four ’til Late (Road Ghosts Trilogy, Book 1) Brett, Gonzo, Jimbo, and Liz embark on a road trip with dangerous detours, dreadful dreams and dire warnings. Along the way they discover that some spirits leave you with more than a hangover and regrets. Turn up the radio and get moving, because the road ghosts are waiting. Sinking Down (Road Ghosts Trilogy, Book 2) Brett and Liz are back in over their heads when a forest hunt for a roadkill-eating creature offers up a ghoulish little surprise. Worse than that, they find that Brett’s fate is linked to the creature’s. So it’s back out on the road, with unexpected pit stops with a greedy ex, a convention of ghost hunters, partying with fake vampires, and drinking and fighting alongside Uncle Gonzo. Me and the Devil (Road Ghosts Trilogy, Book 3) Brett, Liz, and Gonzo undertake a difficult three-night webcast leading up to Halloween. If they’re successful, they may finally get the recognition Brett seeks. But ever since the events in Sinking Down, Brett has been a little… off. On the first night of the webcast, Brett’s sudden tantrum both boosts ratings and terrifies his friends. As Halloween approaches, Brett’s friends find themselves in a desperate fight to save his soul — and his life. “Spectral Delivery” (Bonus Short Story) Meet Enid, a pizza delivery trainee who’s stuck riding along with ghost-geek Brett on Valentine’s Day night. Her boyfriend begs her to try to get off early, but things get weirder and weirder as she and Brett encounter the paranormal at every stop. 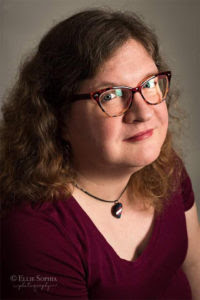 E. Chris Garrison writes fantasy and science fiction novels and short stories. Chris has two series published by Seventh Star Press, the Road Ghosts trilogy and its companion series the Tipsy Fairy Tales. These urban fantasies feature ghosts, demonic possession, and sinister fairy folk delivered with a “lightly dark” side of humor. Her latest series is Trans-Continental, a steampunk adventure with a transgender woman as its protagonist. The series is set in one of the worlds in Chris’s dimension-hopping science fiction adventure, Reality Check, also published through Silly Hat Books. Reality Check reached #1 in Science Fiction on Amazon.com in 2013. Silly Hat Books released Alien Beer and Other Stories, a collection of her short stories, in 2017. Chris lives in Indianapolis, Indiana, with her wife, step-daughter and many cats. She also enjoys gaming, home brewing beer, and finding innovative uses for duct tape. Keep up on the latest news and releases from Chris at https://sillyhatbooks.com/

3/7 Book in the Bag http://bookinthebag.wordpress.com Interview