Already a hit in the U.K., a deliciously disturbing ode to gothic fiction, set on a crumbling estate in the English countryside—where dark secrets lurk behind closed doors... 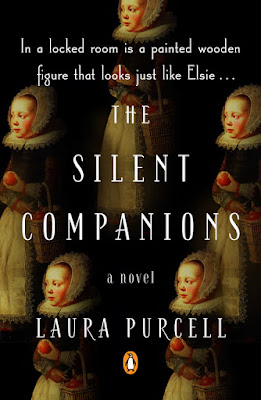 When Elsie Bainbridge married a handsome young heir, she believed she was destined for a life of luxury. Instead, widowed just weeks into their marriage, she finds herself pregnant and alone at her late husband’s family home. The Bridge is a crumbling country estate, neither lavish nor inviting: the servants are resentful, the villagers are actively hostile, and Elsie has only her husband’s awkward cousin for company. Or so she thinks. Inside her strange new home, there is a locked door. Beyond that door is a painted wooden figure—a silent companion—that bears a striking resemblance to Elsie herself. The other residents are terrified of the figure, but Elsie shrugs off their superstitions, until she notices its eyes following her…

Already published to rave reviews in the U.K, Laura Purcell’s THE SILENT COMPANIONS (Penguin Books; Trade Paperback Original; On Sale March 6, 2018; $16.00) is a mesmerizingly creepy Victorian ghost story that will have readers staying up all night—and then checking under their beds and in their closets just to be safe. Set in England in the late 1860s, it has all the hallmarks of a gothic thriller: a decrepit mansion with a dark history, skittish maids, angry villagers, locked doors, a diary full of terrible secrets, objects that move on their own, witchcraft, and more. For Elsie Bainbridge, what begins as a few strange occurrences and odd hallucinations soon develops into unspeakable horrors, as she begins to understand just where the companions came from, and what they want. Purcell got the idea from her research into “silent companions”—real artistic objects, which originated in Holland and were popular in 17th-century Europe.

A terrifically unsettling page-turner, THE SILENT COMPANIONS is infused with a sense of dread that builds to an explosive conclusion. Purcell has written an expertly crafted ode to a beloved genre, an atmospheric blend of historical fiction, horror, and suspense. Compelling, eerie, and full of surprises, THE SILENT COMPANIONS will creep into your consciousness in ways you least expect—much like the companions themselves.

Advanced Praise for The Silent Companions:

“A perfect read for a winter night . . . An intriguing, nuanced and genuinely eerie slice of Victorian gothic.” —The Guardian (UK)

“If The Silent Companions lands on your night table, don't plan on leaving your bed anytime soon. Immersive, meticulous, and reminiscent of the masters of gothic fiction – not only a compulsively readable ghost story, but a skillful, loving ode to the entire genre.” —Lyndsay Faye, author of The Gods of Gotham

“The Silent Companions by Laura Purcell is a sinister slice of Victorian gothic… She spins these tropes into something creepy and page-turning.” —The Times (UK)

Laura Purcell worked in local government, the financial industry, and a bookshop before becoming a full-time writer. She lives in Colchester, the oldest recorded town in England, with her husband. Fascinated by the darker side of royal history, Laura has also written two historical fiction novels about the Hanoverian dynasty.