High school can be a real killer 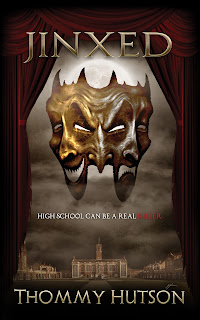 Break a mirror
Walk under a ladder Step on a crack

But someone at the Trask Academy of Performing Arts is taking things one deadly step further when the campus is rocked with the deaths of some of its star students.

Layna Curtis, a talented, popular senior, soon realizes that the seemingly random, accidental deaths of her friends aren't random—or accidents—at all. Someone has taken the childhood games too far, using the idea of superstitions to dispose of their classmates. As Layna tries to convince people of her theory, she uncovers the terrifying notion that each escalating, gruesome murder leads closer to its final victim: her.

Will Layna's opening night also be her final bow?

Purchase Your Copy from:

Read an Excerpt from Jinxed:

Daniel stopped talking, and Parker stopped listening, as they brushed past a nearby photographer. The young woman, also from security but not a resident on campus, was snapping photos. A lot of photos all bound to end up locked away with all of the school’s other secrets, Parker thought.

“I’d like copies of those when you have them,” Parker said in her direction. She stopped and looked up, but not at Parker. Daniel nodded, and she continued.

“We’ll get them to you,” Daniel offered.

“What about the students?” Parker asked.

“Most have already made it to the mainland,” Daniel said. “The rest took the late run and should be docking soon. I have to confirm who, but there are only a handful of students staying on campus.”

Parker rubbed the back of his neck with a cool hand. “I never thought I’d say it, but thank God for spring break.”

The flash of more pictures made Parker squint. Fully inside the room, he could see it didn’t reveal much. A teenager’s messy enclave and an open window. He noticed a framed photo of Sydney on an oak desk.

“So young. So pretty,” Parker said, mostly to himself, as he made his way to the window. He looked out and down to the shattered glass dome of the conservatory. Sydney’s body, the blood, and the glass were already gone. Parker shook his head, lamenting the speed with which things were cleaned.

“Seven years bad luck, huh?” Daniel said, pointing to the open umbrella next to the bed.

“That’s breaking a mirror,” Parker corrected. He looked around the room and sighed.

“Are we boring you, detective?” a man’s voice asked from the doorway.

Parker turned, and the silhouette of a tall, thin man entered the room.

Daniel stepped forward. “Dean McKenna, we were just wrapping up.”

Parker cautiously regarded the sixty-six-year-old Dean of Students. He knew that the man had no plans to retire anytime soon, or at all, if it were up to him. The board was happy with his ability to keep students in line, deliver results to parents, and keep the money on the far side of the black. His motto was to lean on the rod because every child is spoiled, for he was one of the spoiled children a long, long time ago. His family was old money.

“Detective, may we speak outside?” McKenna asked, not offering a hand or stepping any farther into the room. Daniel looked at Parker as if he had better listen to the dean. Parker did so, not because he respected the man, but out of professional courtesy.

McKenna stepped into the hall, and Parker followed. McKenna eyed the door. Parker took the cue and shut it.

“Alfred Parker. The one in charge,” McKenna stated with a smirk.

Parker answered with a closed-mouth smile. The dean could really be an ass when he wanted to be.

“Dean, thank you for coming here. I know it isn’t usual—”

McKenna waved a pale, veiny hand. “This is not an alumni luncheon,” he uttered. “How much longer do you need to be here? The faster we put this poor girl’s tragedy behind us, all the better.”

Parker replied, coolly, “It would’ve been more helpful had I been given more time to look things over and—”

“Figure out why this happened?” the dean finished. “These young adults are under far more pressure than most. From the school, but also from home.”

“Something for the brochure,” Parker said.

“Detective,” Parker said, pleased to do his own interrupting.

McKenna blanched for the slightest of moments, but recovered and continued more tersely. “There are a few hundred students on this campus, each one here to be judged, not just to be good, but to be the best. The competition never ends. It will cause cracks in even the most sturdy. Coupled with adolescence, what can one expect? You see it as tragic. Others claim it is the price of chasing fame and, for the lucky few, fortune.”

Parker was visibly agitated. “Well then, it sounds like you have it all figured out. Kids so stressed they party themselves to death?”

“Exams are done. Spring break is here. Perhaps in their excitement some pushed a tad too far,” McKenna said. “There is nothing malicious in that.”

“I’m told a few students did not leave the island,” Parker clarified.

“Seniors,” McKenna said with an odd sense of pride. “Allowed to stay if they wish and prepare for the showcase. It is a rather big event for us here. People, important people, come in from all over.”

Parker pressed on. “What about faculty?”

McKenna seemed to be getting bored. “Just myself and Lillian D’Arcangelo. She teaches drama and acts as a counselor, and the students love her. We live here on campus. And you have met Daniel. He watches over us all. I know you are terribly busy, but I must ask again, when are you leaving?”

Parker opened the door to Sydney’s room and entered. He closed it behind him, leaving Harlan McKenna to stare at the star shimmering with the name of his dead student. Thommy Hutson is an award-winning screenwriter, producer, and author who is considered the foremost authority on A Nightmare on Elm Street. A graduate of UCLA, Thommy also wrote and produced critically acclaimed genre projects such as Scream: The Inside Story, Never Sleep Again: The Elm Street Legacy, More Brains! A Return of the Living Dead, His Name was Jason: 30 Years of Friday the 13th, and Crystal Lake Memories: The Complete History of Friday the 13th.

Thommy was born and raised in New York but now resides in Southern California with his husband and their cat.