Inspiration for No More Words with Kerry Lonsdale #Giveaway #Excerpt 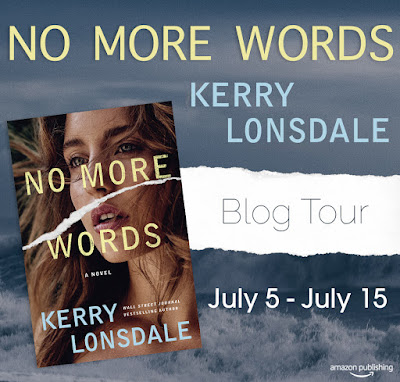 Inspiration for No More Words with Kerry Lonsdale
One summer night years ago I awoke at 2:00 am to glass shattering followed by the horrible sound of metal on metal. The acrid scent of burnt rubber reached me through the opened window I’d gotten up from bed to look out. Parked across the street was my neighbor’s ex-husband’s truck, the side door and panels looking more worse-for-wear than they had when I’d gone to bed. The sudden squeal of tires drew my attention to my next-door neighbor’s driveway where I watched in stunned horror as a green sedan shot across the street and t-boned the truck. The sedan backed up and rammed the truck again. Then again and again until the sedan’s front end crumpled, the bumper scraping the asphalt, the windshield cracking.

My neighbor’s ex-husband charged from the house in boxer shorts and a sleeveless undershirt hollering at the woman behind the wheel to stop. She didn’t, not until she’d pushed his truck up the sidewalk and onto the front lawn. Not until both vehicles were totaled. Not until the police arrived and convinced her to stop. And not until her face was so bloodied from hitting the steering wheel with each impact that she could no longer see. This was before airbags, and her eyes had swollen shut. An ambulance took her away from the scene.

Over the next few days, I learned that the woman behind the wheel was his girlfriend, and she wasn’t the least bit happy he was spending the night at his ex-wife’s house. She’d driven four hours, arriving in the dead of night, to show my neighbor’s ex-husband exactly how unhappy she was. She was also intoxicated. But the real tragedy was his daughter. He’d spent the night at his ex-wife’s house (on her couch) because he’d come to celebrate her eighth-grade graduation. And after the police left and ambulance drove off, I saw her standing on the porch dressed in pajamas, clutching her favorite stuffed animal. She’d witnessed the entire debacle.

I’ve often thought about her, the daughter, that is, wondering how that traumatic event affected her in the long run. There were others too. I wondered how they changed her relationship with her father. Did she pick up his habits as she aged, his boozing and gambling? Did she ever have a chance at a normal life, or did her childhood doom her to live with secrets and pain?

At the heart of the No More series I explore intergenerational trauma through the Carsons, the family featured in the series, and try to answer that exact question: Does a parent’s dysfunction prevent the younger generation from having a normal life, or have circumstances fated them to live with their trauma? From summers of neglect, lies and betrayal, teenage pregnancy, and serving time in juvenile hall, the Carson siblings have their share of baggage, thanks to parents who aren’t ideal. Dwight and Charlotte Carson’s parenting style leaves something to be desired, and of course, their actions lead to the tragic event at the center of the series that splits apart the Carson siblings.

I believe we experience and understand the world through our parents. We mimic their behaviors and habits. And in cases where abuse and neglect are involved, we forge coping mechanisms that aren’t necessarily ideal or healthy. We see this happen with Olivia, the protagonist in No More Words, and the oldest Carson sibling. She is in denial that she and her brother Lucas were treated differently by their parents than their younger sister Lily, who the parents often emotionally abused and neglected. Haunted by her past, betrayed several times over, Olivia has closed off her heart. Her trauma dictates her behavior and actions.

But despite this, I also believe that even though our past experiences can leave us fractured and flawed, we can rise above it, control it rather than letting our past control us. Through therapy, love, and acknowledgement, we can stop the cycle of intergenerational trauma. And we see this happen as Olivia works through her issues, taking ownership of the role she played in her family’s dysfunction and the disappearance of her younger sister Lily who she hasn’t seen since she ran away from home, sixteen and pregnant.

This makes me believe that the thirteen-year-old girl on the porch all those years ago has been living a rich, normal life that isn’t ruled by her childhood. 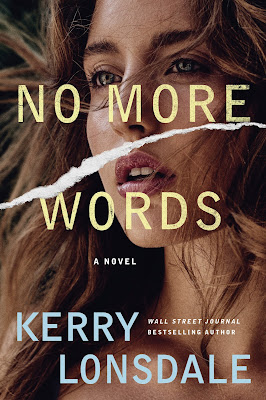 Read an Excerpt from No More Words:

She glances back at Josh. He’s halfway down the hall looking at the framed photos on the wall. He makes a noise.
“What is it?” she asks, miffed. She thought he was right behind her.

He points at a photo and tries to speak, but the words stick to his tongue like wet sand on a damp bathing suit. He punches the air and roughly points at the photo, begging her to understand. Olivia motions with her hands for him to be quiet, glances back at her parents’ bedroom door, and makes her way over to him and studies the family portrait that has his attention. The photo was taken Olivia’s senior year in high school during Dwight’s third and last campaign. She was seventeen, Lucas fifteen, and Lily twelve-and-a-half. Big brown eyes fill Lily’s face. Braces hug her teeth. A flat chest doesn’t deter from her budding beauty.

Josh squeezes his eyes shut and bangs his head with his fists. He’s literally trying to beat the words out.

Familiar with his signs of distress, Olivia gently touches his shoulder. “Look at me. Josh, hey,” she says, urging him to come with her outside before Charlotte hears them. The fresh air and openness will calm him down. They can return later.

His eyes snap open and he makes a grab for the photo. “Shh. Don’t do that,” Olivia loudly whispers. She slaps a hand to the frame so the photo remains mounted. “Take a breath, Josh. Relax and talk your way through this. What’s wrong with this picture? Are you looking for your mom? She’s right here, see?” She prompts him like she’d read about for people with aphasia. Spell out the words. Give them the chance to speak.

His face reddens and a word pops from his mouth like a truck backfiring. “Bad.”

“The photo or the people in it?” Olivia’s gaze rakes over the family portrait. Charlotte had wanted a magazine spread when SLO Life featured her as a top real estate broker in the county. California Living used the same photo when the publication featured a sneak peek inside their custom-built home during Dwight’s campaign. Taken in the backyard, Dwight and Lucas wore tuxedos. They looked dashing in black with their silk ties. Charlotte, along with Olivia and Lily, wore champagne gowns with all the sparkle and glitz found at an Oscars after-party. Their dresses shimmered in the golden hour sunlight. Wind cut across the yard at the perfect moment, ruffling Lucas’s hair and lifting her cinnamon locks and Lily’s long auburn tresses off their shoulders the moment the photographer snapped the shot. A glamorous pose that rivaled that of any family of status. The photographer won a coveted award for the photo. Dwight posted the image on the About Us page of his corporate website. The photo, along with the accompanying articles, cemented the Carsons as a family to watch, much to Charlotte’s delight. How I wish my daddy could see me now, Olivia recalls her mom remarking on more than one occasion about the grandfather Olivia had never met.

If people could see them now.

What a mess the Carsons have become.

“Bad.” Josh jabs at the glass. The photo swings on its hook.

“Careful.” Olivia fixes the frame. There’s a larger version of this photo above the living room fireplace, but Charlotte will still have a conniption if anything happens to this one. It’s her favorite of all the portraits in the hallway.

“Bad.” Josh knocks her shoulder, pushing her back.

“Hey.” She stumbles against the wall.

“Bad. Bad.” He yanks the photo off the wall, ripping out the nail along with. Drywall dust sprinkles to the floor like snow.

Charlotte comes out of her room, tucking a pale-blue blouse into cream slacks, her makeup partially applied. Only one cheek has been rouged. Her lips are unadorned, making the color above her eyes stand out. She looks waifish, like a model in a designer label ad. “What’s going on?” She stops when she sees Josh. “Why’s he here?”

“Put that down,” Charlotte roars, her face deathly pale.

Her reaction sends a ripple of fear through Olivia. Where’s this coming from?

He shakes her off. “Bad. M-m-man!” He spits the word. Rage fills his eyes. Something else churns there, too.

Heart pulsating in her throat, Olivia looks at the photo. There’s only one man in the picture because Lucas is just a kid, not much older than Josh: her dad.

Forced to choose between abortion or adoption, Olivia Carson’s younger sister, Lily, runs away from home. Sixteen and pregnant, she never returns. But she writes. Once a year, Lily mails a picture of her son, Josh, to Olivia until his thirteenth year. Then it’s Josh himself who arrives at Olivia’s house, alone, terrified, and in possession of a notarized declaration from Lily. It begins, “In the event I go missing…”

Josh has difficulty talking. He can’t read or write, but he’s a prolific artist, exhibiting skill beyond his age. His drawings are as detailed as they are horrific. Olivia soon realizes Josh’s artwork tells a story. There’s more to his arrival and to Lily’s untimely disappearance than it seems. Using the drawings as a road map, Olivia traces Josh’s path back to his mom. Each drawing sheds light on Lily’s past and reveals a darkness that forces Olivia to question everything she thought she knew about her family. 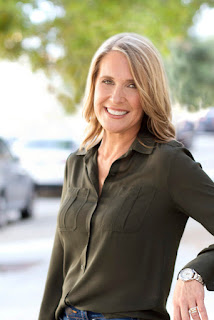 Kerry Lonsdale is the Wall Street Journal, Washington Post, and Amazon Charts bestselling author of Side Trip, Last Summer, All the Breaking Waves, and the Everything Series (Everything We Keep, Everything We Left Behind, and Everything We Give). Her work has been translated into more than twenty-seven languages. She resides in Northern California with her husband and two children. You can visit Kerry at www.kerrylonsdale.com.