This post is part of a virtual book tour organized by Goddess Fish Promotions. Darren E. Watling will be awarding a $15 Amazon or B/N GC to a randomly drawn winner via rafflecopter during the tour. Click on the tour banner to see the other stops on the tour. 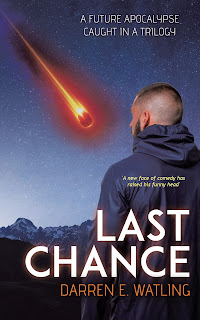 About the Book:
The earth's epilogue was a forgone conclusion.
Our World selects seven of the best human beings that man, woman, and other could put their faith in, to ensure human existence, each displaying traits of a master in his/hers/its field.
However, not all traits are in the best interest of humankind.
Out of this World places seven hospital patients on a Plan B shuttle. Life was difficult on Earth. A new planet presents new problems. The ex-Fruit and Nut Friendly Psychiatric Hospital patients are up for the challenge.
Into the Other World—The Twist. Not only a mid-1900s dance, it is also associated with a lemon, a warped shape, a frame of mind, a warped frame of mind, a face you pull from sucking lemons and an end of story, unexpected finish, not to be given away, glancing at the back cover.
Genre:
SciFi Comedy

“The court versus Jarred Pork,” the bailiff announced.

“Another serious offence. Jaywalking again. Unbelievable. What have you got to say for yourself, hmm? Well? Speak up, speak up,” the judge said, his thick and fearsome eyebrows alternating up and down.

“If the court pleases, Your Honour . . .” Sid, the defence lawyer, started.

“I’m the accused’s attorney. I will speak for Jarred as the accused is mute.”

“Jarred went out looking for his husband, as he hadn’t returned with an asthma puffer for their great-grandson., Wheelchair-bound, Jarred left the child with a trusting neighbour. As Jarred left their tiny unit, the red-bearded, dreadlocked kiddies friend, Molly Lester sang a kiddie song, and everyone assumed the child was safe, sport. (It is said Molly was heard on the phone: Hey, Dad! Bring Bill over. I’ve got another one. Presumably, another child to nurture, teach and explain what fine examples of human beings they are).

“I’ve heard enough from that man’s/woman’s/its mouth. Guilty! Throw away the key, like a rapper!” “Next, and this better be good, Johnny,” Clint said, as Sid swapped out and Johnny became the new defence lawyer.

“You sure are a weird lawyer Johnny, but I like you.”

“Oh, you poor thing. What have they got you in here for?” the judge showing compassion to the DD’s.

“You have a very strong defence Miss Action,” the unbiased judge claimed. “Let the prosecution begin.”

From chapter ‘Clint’ part three – Into the Other World

Born Darren Edward Watling, Subiaco, Western Australia, 1966. Darren excelled in English, maintaining ‘A’s, throughout his schooling and wrote a play, ‘Laughing Gas’, for his school at the age of 10. Credited with one small, published article, Darren found inspiration and reward, arriving at his latest piece, ‘Last Chance’.

He completed an apprenticeship, as a fitter, at Princess Margaret Hospital, while continuing his passion for short story writing.

Traveling Australia for three years on a private bus gave Darren a beginning to the experiences and continued, humorous outlook he has on life.

Darren approached his mother Jill Stubbs Mills and asked for her blessing to take her short story, ‘Deception’, and rewrite it into a novel. (The feedback from her publisher about her story was exceptional). Jill agreed to her son’s request. Sadly, Jill now suffers with dementia, but, keeps her sense of humour.

Various forms of employment, including a movie extra, a welder on a crocodile farm, a drummer for a touring band and currently a roof plumber, gave Darren considerable ‘fuel’, for a fired up, comedic novel.

Darren has had several passions over the past 56 years while walking this Earth. Drums, Karate, tennis and continuing today- comedic writing.