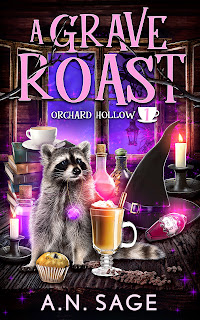 A Grave Roast
Orchard Hollow
Book One
A.N. Sage
Genre: Paranormal Cozy Mystery
Publisher: Cauldron Press
Date of Publication: January 23, 2023
ISBN: 978-1-989868-28-7
ASIN: B0BPDXZ7F5
Number of pages: Approximately 340
Word Count: 80,000
Cover Artist: Cauldron Press Designs
About the Book:
Piper Addison has three problems: a broken espresso machine, malfunctioning magic, and a dead body. Guess which one she doesn’t see coming?
One month from forty, Piper Addison thinks she finally has life figured out. Sure, her bank account could be fuller and the cafe she opened with the last of her savings could use some help, but what’s a few kinks for an Orchard Hollow witch?
Too bad Piper can’t witch to save her life, which is exactly what she might need to do when a dead body is discovered in the alley behind her cafe. To make matters worse, all the evidence points to Piper and the local sheriff is not too keen on the town’s paranormal inhabitants.
When a mysterious envelope lands on Piper’s doorstep, she has a decision to make: go behind the sheriff’s back and try to clear her name, or spend her fortieth birthday in a prison cell.
A Grave Roast is a paranormal cozy mystery complete with an unlucky witch, a ghost familiar, and a feisty raccoon with a talent for getting into sticky situations.
Purchase on Amazon
Sapphyria's Review is coming soon!!

We started for the front door when my attention caught on something on the floor of the hall. Close to the bedroom lay a small carpet with two silver dishes, one filled with water and the other empty. I bent down and picked up the empty dish, reading the inscription etched into the metal. “Margaret the Third.”

I put the dish down. “Daniel’s dog. Did you see a dog around here?”

The ghost shook her head and looked around.

“Maybe someone else has it? Or the police took it or something?”

My thoughts ran a mile a minute, and I steadied my breathing, continuing the trek to the front. “Maybe.” Before leaving, I went back into the kitchen and opened all the cupboards.

Motioning for Stella to get closer, I nodded toward the big bag of dog food in one cupboard. “Don’t you think if they took the dog, they’d take her food?”

“I don’t know,” Stella said. She opened her mouth with a fake yawn. “Well, this was about as fun as a trip to the dollar store, so good luck with the rest and I’ll see you at home.”

With that, she disappeared, leaving me alone in the apartment once more. I stared at the dog food for another few minutes, trying to figure out why someone would take Daniel’s dog, but not anything to feed her with. If Daniel had a dog sitter, I was sure they’d take care of the animal, considering how important she was to the warlock. And if it was the police who took her… I shook the thought away. Why did the police need a spoiled brat of a dog? If anything, they’d ship her off to a shelter.

I made a mental note to check the animal shelter in the morning to ease my spinning mind and walked to the front. Before I left, I cast a glance at the stack of papers on the console table where Cilia’s threatening email hid in the pile.

“Why was she so angry with you?” I asked the empty room.

The next question I kept to myself, refusing to give it power. Was Cilia angry enough to kill? If it was her that hurt the warlock, it still didn’t explain the envelope I received or the talisman. Unless the talisman was Cilia’s and Daniel stole it?

It seemed the visit to the warlock’s apartment only sparked more questions, and I still found nothing that could help clear my name in the eyes of the police. “What if—No, don’t even think about it!”

I reached for the door handle.

“Don’t think about what?” Stella asked behind me.

My mind must have been spinning furiously because this time, I didn’t have a mini heart attack when she snuck up on me. “I thought you went home.”

“I did. Turns out it’s quite a bore there as well,” she explained. “So, what is it you shouldn’t think about?”

Lips in a thin line, I looked at the console table again. “Just wondering about the dog,” I told her. “And the hex pouch. And Cilia.”

“One of Nancy’s coven mates. Looks like she was pretty ticked off with Daniel for some promotion he got. I was wondering if she could have been mad enough to do something about it.”

Stella’s face paled, or as pale as it could get for a ghost. “Witches will be witches, darling.” She turned around and started to vanish again, but before she did, she said something absolutely crazy. “If you’re that worried about it, why not ask her yourself?”

As my wild familiar disappeared, her words lingered in the air where she once stood, and for the first time, I didn’t think her insane. I hated to admit it, but Stella had a point. There was one clear way to answer all my questions and find out how I got roped into this gruesome situation.

I had to question Cilia, and I had to do it before the police. If I was right and she had something to do with Daniel’s death, I knew the witch would pin the entire thing on me, if only for the chance to gain favor with Nancy.

This, friends, was exactly why I didn’t have a coven.

You couldn’t trust a witch, not in Orchard Hollow. 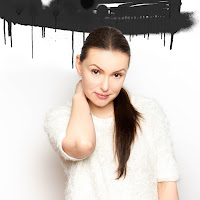 Meet the Author:
A.N. Sage is a bestselling, award-winning author of mystery and fantasy novels. She has spent most of her life waiting to meet a witch, vampire, or at least get haunted by a ghost. In between failed seances and many questionable outfit choices, she has developed a keen eye for the extra-ordinary.
A.N. spends her free time reading and binge-watching television shows in her pajamas. Currently, she resides in Toronto, Canada with her husband who is not a creature of the night and their daughter who just might be.
A.N. Sage is a Scorpio and a massive advocate of leggings for pants.
https://ansage.ca/
https://ansage.ca/newsletter-1
https://www.tiktok.com/@ansagewrites
https://www.instagram.com/a.n.sage/
https://www.facebook.com/ansagewrites 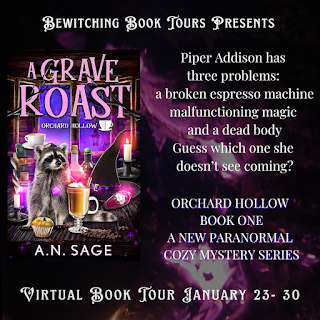