Read an Excerpt from StoneKing (The Gemeta Stone, Book 3) by Donna Migliaccio #Fantasy 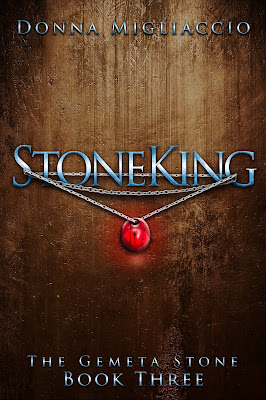 They call him StoneKing: the lord of four countries, the vanquisher of the Wichelord Daazna, the man who will restore his people to prosperity and peace.

But there is no peace for Kristan Gemeta. Already weighed down by the cares of his new realm, Kristan carries a secret burden – the knowledge that Daazna is not dead. He isolates himself in his ruined castle in Fandrall, where he struggles to control the destructive Tabi’a power that may be his only hope of defeating the Wichelord once and for all.

And there’s trouble elsewhere in his realm. His Reaches are squabbling in Dyer, Melissa and Nigel are experiencing heartache in Norwinn, and Heather’s command in Hogia is in jeopardy. Unaware of this turmoil, Kristan receives an unexpected gift – one that forces him, his knights, an inexperienced squire and a crafty young shape-shifter into a hazardous winter journey.

Read an Excerpt from StoneKing:

He did not realize he had fallen asleep until some small sound woke him. The room was nearly dark, the fire almost out, and his fingers around the scrying ball were stiff with cold.

“You should be in bed, StoneKing.”

He jerked upright. Sitting across the table was the old Wiche woman, wrapped in her blankets and smiling. “All the castle slumbers but you and me,” she went on. “Even your two faithful knights on watch outside this room are sleeping… now.”

“Did you spell them?”

“They were nodding off anyway. I just gave them a little nudge so I could slip past.”

“You take great liberties in my house, madam.”

He opened his mouth to retort, then shut it. She was right. He could not remember the last time he had spoken to anyone except as lord and ruler.

She nodded at the ball. “Do you See?”

“See?” It took a moment before Kristan realized what she meant. “Oh. No. I never could.

He rolled the ball across the table. She caught it in her tattooed old hand, lifted it to the light and turned it this way and that. “It’s a pretty thing, but the Sight has never been one of my skills.

How did you come to have a scrying ball, Gemeta?”

“It was given to me when I was a child. I never understood what it really was. Never knew its true purpose until someone told me last summer. I don’t know why it was given to me. I have no
Wiche skills – no magic.”

She chuckled. “Every child has a little magic, if only because it doesn’t know any better. Every child is full of yes, until elders and experience fill it with no. Whoever gave you this ball must have seen a great deal of yes in you.” She rolled the ball back, squinting at him. “Now, of course, you’re full of no. All grown people are, but you – you’re brimful, poor boy. No wonder you spent half the morning all aswoon on the floor.”

Kristan’s skin prickled. “How do you know that?”

Donna Migliaccio is a professional stage actress with credits that include Broadway, National Tours and prominent regional theatres. She is based in the Washington, DC Metro area, where she co-founded Tony award-winning Signature Theatre and is in demand as an entertainer, teacher and public speaker. Her award-winning short story, "Yaa & The Coffins," was featured in Thinkerbeat's 2015 anthology The Art of Losing.