This post is part of a virtual book tour organized by Goddess Fish Promotions. David Pereda will be awarding a $25 Amazon or Barnes and Noble GC to a randomly drawn winner via rafflecopter during the tour. Click on the tour banner to see the other stops on the tour.

Scroll down to read about the book, read an excerpt, meet the author, and enter the giveaway! 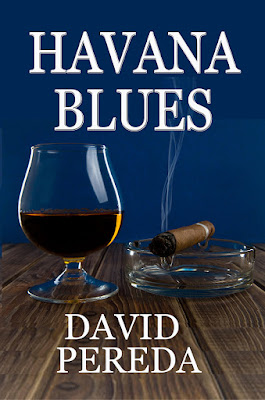 The year is 1952 and Ramon Rodriguez’s life as a teenager in fun-loving Havana is filled with typical activities and concerns: girls, education, religion, baseball, parties, and hanging out with friends. The country is enjoying a period of prosperity and happiness--until General Batista stages a coup that topples the government and Ramon’s life is flung into chaos.

As Ramon experiences the thrills of his first romantic relationship, graduates from school, and struggles to plan for an uncertain future, he is forced to make important decisions that may be dangerous to him, his family, his friends, and his girlfriend – the beautiful Sonia -- and could turn deadly.

Read an Excerpt from Havana Blues:

My room was on fire. Orange tongues licked the crumbling walls and snaked across the burning floor toward my bed. Thick gray smoke choked me. My ears throbbed with an insistent and reverberating sound.

I gasped for air. My palms felt sweaty, and my heart thrashed against my rib cage, as if trying to escape my chest. I opened my eyes. For a moment, I was in a bright and silent void – then I heard my parents arguing in the kitchen.

It was a hot and sunny morning. I had been dreaming of hell again, and the alarm clock was ringing.

I shut it off.

Ever since Brother Santiago had given in Religion class a week ago a vivid and realistic description of hell as punishment for masturbation and having sex with prostitutes, I’d had the same dream over and over. Amid much commotion and speculation, Pacheco, the frail student with a perennially runny nose who sat behind me in class, fainted and had to be carted off to the school infirmary, pale and limp like a noodle in won ton soup. Everyone in class knew Pacheco was an assiduous masturbator – he bragged about it to other students often enough – but his blackout generated great speculation in the school about his frequent visits to brothels. I wondered what kind of nightmares Pacheco was having.

On second thought, I really didn’t want to know. I had enough with my own nightmares of hell.

I stretched lazily in bed. Today was a special day. It was my birthday. I was fifteen years old.

A door slammed somewhere, and once more I was aware of my parents’ angry voices in the kitchen. I likened their arguments to a sort of word symphony, the sound of their voices harmonized so well. My mother’s shrill, piercing sting was a nearly perfect complement to my father’s placating hum.

Though I couldn’t hear them clearly, I guessed what they were arguing about – money. Ever since Papa’s broom-making business started going bad, it seemed money was all they ever talked about.

David Pereda was born in Havana, Cuba. The award-winning author of seven previous novels, he enjoys crafting political thrillers and edgy mainstream novels with unique characters placed in exotic settings. He has traveled to more than thirty countries and speaks four languages. Before devoting his time solely to writing and teaching, David had a successful international consulting career with global giant Booz Allen Hamilton, where he worked with the governments of Mexico, Venezuela, Peru and Qatar, among others.

A member of MENSA, David earned his MBA from Pepperdine University in California. He earned bachelor degrees in English literature and mathematics at the University of South Florida in Tampa.

He lives in artistic Asheville, North Carolina, with his youngest daughter Sophia, where he teaches mathematics and English at the Asheville-Buncombe Community College. He loves sports and is an accomplished competitor in track and show-jumping equestrian events.

Connect with the Author on Social Media: