A DARK LEGACY where only the strong survive and those who are Goddess touched can complete the warriors who fight to protect the world from the creatures that go bump in the night. 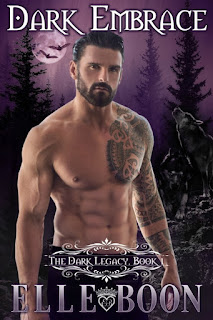 Jennaveve, the Fey chosen by the Goddess to be the queen of her people for the past few millennium, is tired and wishes for a break, but hadn’t counted on being reduced to almost mortal thanks to a dark stranger. They say you should be careful what you wish for. The last time she’d taken a break, her Fey had left their realm, resulting in shifters on Earth known as the Mystic and Iron Wolves and even more she was still searching for.

Damien and Lucas Cordell knew they’d share a Hearts Love when the time came. As the twin sons of the Vampire King who’d mated a shifter, they were the first of their kind. When they’d thought their mate was finally within their reach and was a shifter like their mother only to realize she wasn’t theirs, they’d almost lost their lives to the alpha of the Iron Wolves, Kellen Styles. Instead, the error led them to the being that was…the Fey Queen Jennaveve. Only she was even more elusive than the wind.

Time and patience was something Damien and Lucas had in spades, until the female they’d already laid claim to, even if she hadn’t accepted them yet, was taken by an enemy. Saving Jenna became their one and only focus. As time and realms slip between them, their fear for her had them forgetting about patience and made claiming Jenna as their Hearts Love, hoping she accepted their Dark Embrace.

Will the Cordell Twins be able to rescue Jenna from the evil who has taken her?

Will Jenna get her powers back? Who is the dark presence and how will they defeat a being who is strong enough to bring the Fey Queen down to her knees?

Read an Excerpt from Dark Embrace

“Hello again, Fey. You’re looking slightly ill. Are my…family not treating you well?” His eyes flashed from obsidian to red. Where her men had gorgeous eyes that she wanted to get lost in, this mans were cold and lifeless.
His words finally registered. “Your family?”
He raked his claws together, making them clack in a way Jenna was sure he did to scare his victims. Newsflash asshole, I’ve faced bigger, badder, uglier, and hopefully deadlier foes, she thought.
“I’d love for us to stay here and chat, but I fear the big guy is waking, and well, I’m not in the mood for a reunion just yet. By the way. Sorry, my pet. I don’t usually use females as pawns, but in this instance, it’s a must.” He flew across the room, eliminating the space separating them.
Jenna fell back against the bed, nearly falling on her ass. His quick reflexes kept her upright. “What the hell are you talking about?” She pressed her hand to his chest, trying to put space between them.
He shook his head. “You’ll find out in due time, my pet. Now, we must go before father-what-a-waste awakens.”
She knew the telltale signs of magic and could feel it as the man in front of her began to manipulate the fabrics of time and space. “Who are you?”
He flashed her a smile, white teeth with two canines much longer than the others prevalent. “My name is Khan, son of Zahidda. Bastard son of Damikan at your service.”
The door flew open, giving her hope she’d be saved. The sight of Damien and Lucas had her shoving harder against the rock-hard chest. “Let me go, asshole. I’m not your pawn.” It was like trying to move a mountain if you were a mere human. Goddess, she hated being so weak.
“Jenna, flash away,” Damien growled.
“Ah, but your female can’t. It seems I’m her cure, little brothers,” Khan taunted.
Lucas stepped forward. “Who are you and what do you want?”
Khan tilted his head to the side. “You have nothing I want. Tell your father I’ll be in touch. Oh, here,” he tossed a necklace onto the bed. “He’ll know who I am with that. If not, then you’re little plaything will become mine…until I tire of her.”
Blackness swirled around Jenna as she heard both Lucas and Damien roar her name. A sick feeling hit her square in the gut, one she knew all too well. Khan was playing a game with the Cordell’s. One only he knew the rules to, and he had zero compassion for anyone getting in his way unless he could use them for his own gain. Jenna just happened to be exactly what he needed in order to hit back at the man he felt deserved it. Shit, she so could use her Fey powers, or even her bestie Kellen right about now. Or even better, if she’d not have been so stubborn and mated with Lucas and Damien instead of waiting, then none of this would have happened. “Well, what if’s do nothing but make big girls cry over spilled milk,” she muttered to herself.
“What?” Khan asked as he opened the portal allowing light to filter in.
She blinked a few times. “Huh?”
“You mumbled something about girls crying and spilled milk.” He carried her over to a couch and set her down. His gentle touch and actions at war with his words to Damien and Lucas.
The light airy room reminded Jenna of a lake cabin, one that families would go to on vacation. “Oh, um, nothing. I talk to myself sometimes.”
Khan shrugged his shoulders. “Make yourself comfy, you’ll be here for a spell or two.” He winked.
A growl rumbled in her throat. “Hahaha, very funny.”
He was next to her in a blink. “No, I’m not funny at all. What I am is deadly. You will do best to remember that.” He raised his nails, the longer lengths looking ominous now, reminding her of the night he’d cut her cheek.
“You did something to me when you sliced my cheek open.” If he was going to kill her, she’d at least know the hows and whys. 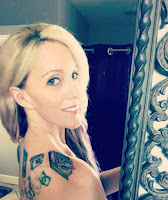 Elle Boon lives in Middle-Merica as she likes to say…with her husband, two kids, and a black lab who is more like a small pony. She’d never planned to be a writer, but when life threw her a curve, she swerved with it, since she’s athletically challenged. She’s known for saying “Bless Your Heart” and dropping lots of F-bombs, but she loves where this new journey has taken her. 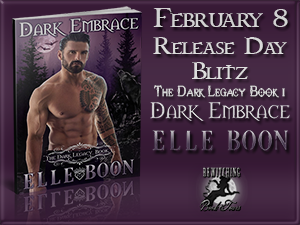