You Might Be a Bluestocking If... with Christi Caldwell, Author of The Bluestocking (Wicked Wallflowers, Book 4) @ChristiCaldwell #Giveaway

You Might Be a Bluestocking If... with Author Christi Caldwell

In my newest novel, The Bluestocking, Gertrude, the eldest Killoran sister, has spent a lifetime being underestimated—especially by her own family. She may seem as vulnerable as a kitten, but given the chance she can be as fierce as a tiger. Her adopted brother Stephen has just been snatched back by his true father, and she’ll be damned if she relinquishes the boy to the man reviled throughout London as the Mad Marquess.

With every moment he shares with the tenderhearted Gertrude, Edwin’s anger softens into admiration . . . and more. It is possible that the woman he loathed may be the only person who can heal his broken soul?

Gertrude was such a wonderful character to write. She’s the eldest of her siblings and firmly on the shelf. She’s incredibly diverse in her strengths and in her interests and in the knowledge she possesses: it’s a knowledge that really is all-encompassing, spanning furniture-making to the care of animals to skills for surviving on the streets. In addition, she’s been responsible for educating the children in her family’s care, and what I found so fascinating is that she knows the value of education and what she’s been providing has been so important, and yet so many have failed to appreciate the power of her contributions.

In honor of Gertrude, an intelligent, interesting, and ultimately irresistible heroine, I have written a short game of "You Might Be A Bluestocking If..." so you can test yourself to see what you have in common with Gertrude. 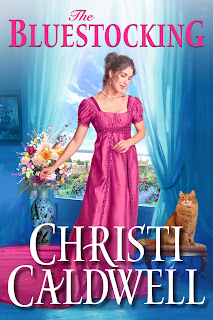 Read an Excerpt from The Bluestocking:

Who was this . . . daughter of Diggory? The one few spoke of and about whom little was known.

Edwin pushed himself away from the door, and folding his arms at his chest, he took slow, predatory steps closer, walking a path around her. His earlier assessment in the darkened foyer of the woman had proven correct. Drab brown hair. Nondescript brown eyes. Of medium height, and in possession of a slender frame that left her cloak hanging unflatteringly upon her, there was nothing extraordinary about the last unwed Killoran. Which was no doubt why she’d not snagged herself a wealthy or powerful husband as her sisters had already done. At his lengthy scrutiny, she dared him with her eyes. And yet for her . . . ordinariness, there was a strength of spirit that radiated, casting a soft blush upon cream-white cheeks, that marked her as . . . interesting. She was interesting. He stopped abruptly. Seeing this woman in any light except the darkened one was a betrayal to his late wife and his children, both living and dead . . . and himself.

“I was clear with my demands. Get out now, Miss Diggory.”

The stubborn chit pursed her slightly too-full lips. “As I said earlier, you were less clear than you give yourself credit for,” she challenged, ignoring the latter part of his directive. My God, she is an insolent bit of baggage. “And my name is Killoran.”

The names were synonymous and interchangeable.

Edwin stopped before her so only a pace divided them. “And tell me, where was I not clear?” he purred. “Was it the part about making sure Broderick Diggory hangs, as he deserves, that was not clear?” The color bled from her cheeks. “Or was it my stated intentions for your sisters . . . what are their names? Ophelia? Cleopatra?” he asked, mocking that Shakespearean queen’s name, and the woman in front of him frowned deeper. “How . . . unfortunate it would be if their business ventures were both to fail.”

The young woman curled and uncurled her coarse hands at her sides. “Do not threaten my family,” she said coolly.

He’d hand it to her. She remained undaunted.

“Or what, Miss Diggory?” A muscle ticked at the corner of her right eye, but she did not rise to the bait, either. “Will you set my townhouse afire and attempt to steal my son . . . again?”

Her features leached even more of their color, leaving those previously blushing cheeks a ghastly grey-white. And for her earlier brave show, it was her turn to falter. “I didn’t . . .” And he celebrated that triumph over his enemy.

“What was that?” he barked, cupping a hand around his ear. “You didn’t what?” Destroy my life? Shatter my family? “Kidnap my son?” he settled for, refusing to voice aloud his greatest agonies before this of all women.

“Now leave, and tell your real brother if he violates our arrangement once more, using you or another one of your . . . sisters or his henchmen to do his work for him, I’ll take you all down.” His in-laws’ earlier recriminations flooded forward. It was just something else they’d been right about.

Edwin had stomped over to his desk when he registered the absolute silence—more specifically, the lack of retreating footfalls.

Miss Diggory jutted her chin up defiantly. “No one sent me, my lord. I am here of my own volition.”

He chuckled, that rusty, ill-used laugh more a growl than anything that could ever be confused with a real expression of mirth. No one came here of their own volition. As a rule, the world avoided him.

Shifting direction, he returned to the stubborn chit’s side, and leaning down, he placed his mouth close to her temple once more and fought the maddening pull of whatever damned perfume she dabbed behind her ears. “Do you think I’m foolish enough all these years later to believe a lie dripping off a Diggory’s lips?”

The young woman’s back moved up and down, an indication of her rapid breath. Of her fear. A lifetime ago, he’d have sooner chopped off his left hand than deliberately taunt a woman and take pleasure in her fear. No longer. That pathetic excuse of a man who’d gotten his wife and babe killed, and the other son snatched, reveled in this woman’s unease. “Hmm?” he prodded, and she jumped.

“I have no reason to lie to you, my lord,” she said calmly, and as she spoke, her breath, containing a whispery trace of honey, filtered from her lips and fanned his mouth. Another unexpectedly sweet scent, at odds with her past and name and sins. It enticed, drawing his gaze to her mouth and holding his focus there, mesmerized. “There is nothing I want, need, or desire.” She darted her tongue out and traced the plump seam of her lips. And God forgive him, his gut clenched. For even as self-loathing spiraled through him, something far worse, far more perilous and viler and more treacherous, held him in its snare: desire. “The only reason I’ve come . . . the only worry I had . . . was for Stephen.”

That single name, spoken aloud, snapped whatever siren’s trap she’d sucked him momentarily into. “August.” Had there ever been a doubt as to his insanity, this quixotic fascination with the woman’s slightly too-full mouth as she spoke was evidence enough of it.

She tipped her head, and one of the few brown strands that had managed a curl bounced at her shoulder.

Edwin flared his nostrils. “His name is August Rudolph Thadeus Stephen Warren, the Earl of Greyley.” He flicked a stare over her face. “You’ve no relation to him. He is His Lordship to you.” Stalking over to the front of the room, he pulled the door open. “Now that you’ve seen him”—he peeled his lip in a mocking sneer—“safely delivered to his rightful home, you are dismissed. You may leave now.”

Gertrude Killoran drew in a breath. “I am afraid I cannot do that.”

He narrowed his eyes. “And whyever not?”

“I beg your pardon?” What more could she possibly want or expect of him?

The young woman clasped her palms before her, like a nun at the abbey. “I’m staying.”

Confusion rooted around his mind. “Staying?” he repeated. “Staying where?”

“Here.” She settled her features into a serene expression he’d have believed impossible for a Diggory. “Indefinitely,” she clarified.

Edwin rocked back on his heels.

My God, I’ve finally found someone madder than myself.

Gertrude, the eldest Killoran sister, has spent a lifetime being underestimated—especially by her own family. She may seem as vulnerable as a kitten, but given the chance, she can be as fierce as a tiger. Her adopted brother, Stephen, has just been snatched back by his true father, and she’ll be damned if she relinquishes the boy to the man reviled throughout London as the Mad Marquess.

With every moment he shares with the tenderhearted Gertrude, Edwin’s anger softens into admiration . . . and more. Is it possible that the woman he loathed may be the only person who can heal his broken soul? 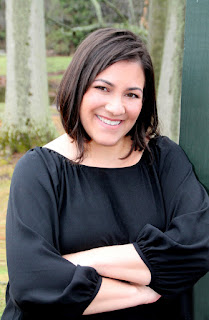 USA Today bestselling, RITA-nominated author Christi Caldwell blames authors Julie Garwood and Judith McNaught for luring her into the world of historical romance. When Christi was at the University of Connecticut, she began writing her own tales of love. She believes that the most perfect heroes and heroines have imperfections, and she rather enjoys torturing her couples before crafting them a well-deserved happily ever after.

The author of the Wicked Wallflowers series, which includes The Governess, The Hellion, and The Vixen, Christi lives in southern Connecticut, where she spends her time writing, chasing after her son, and taking care of her twin princesses-in-training. Fans who want to keep up with the latest news and information can sign up for Christi’s newsletter at www.ChristiCaldwell.com or follow her on Facebook (AuthorChristiCaldwell) or Twitter (@ChristiCaldwell).