The past keeps Caibre and Aisla apart. Only Love and forgiveness can give them a future. 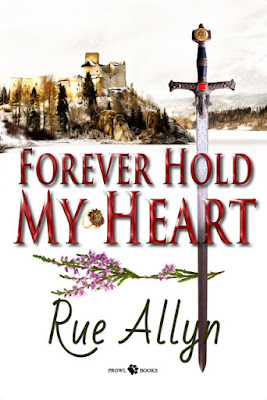 The hero of Rue Allyn’s A Wish for All Seasons, Caibre MacFearann, left Scotland and love behind believing he would never return. However, one small ring changes everything.

Losing Caibre MacFearann’s love once hurt so much that Aisla MacKai wants nothing to do with him when a blizzard brings the man to her doorstep. Kindness and human charity require that she give him shelter, no matter that her poor heart had never mended.

Meet the Hero and Heroine:

Hero—Caibre MacFearann left love and Scotland to seek his fortune in Wyoming Territory and never looked back. He rejects nobles oblige and ancient bloodlines, until family commitments call him to Scotland and a legendary sword returns him to his love.

Heroine—Fiercely independent since her first breath, Aisla MacKai, is no pampered, English society miss. She learns quickly and works against all odds to save her clan. She is bold as the seas that surround her home and as determined as the rocks that stand fast against all invaders.


She tasted like the dawn of a Wyoming summer day, a crisp freshness that filled his head and body with joy combined with a dark smokiness that squeezed his heart at the same time it wrapped him in the comfort of knowing he’d found his true home.

He gathered her in his arms and lifted her against his chest. One hand cradled her head, stroking her silken midnight tresses as he swept kisses across her face and nibbled at her neck. His other hand cupped her bottom, supporting her and torturing himself in the best possible way. His palm burned, yearning for the touch of skin and her soft woman’s body.

Her arms crept up his chest. Her fingers tangled in his hair and, she pulled his head back to her lips. Her sweet, smoky, tender lips. He could drown there and die happy. But his body insisted he go on living, give and take as much pleasure as possible. Where could they . . . ?

Caibre dropped Aisla to the floor but kept a steadying hold on her. He turned in a single movement to place her protectively behind him. Mrs. Grogan stood framed in the doorway, the cart before her loaded with tea things, the whisky decanter, and a single glass.

“I’ll be telling the Baron what I’ve seen. Ye’ve ruined Miss Aisla, and ye’ll pay the price.” The housekeeper craned her neck to look past him. “Both of ye. For shame Miss Aisla, and with a filthy MacFearann.” The old woman pushed the cart into the room, moved back from it, and folded her arms. “I’ll no be leaving her alone with the likes of ye.”

Aisla stepped out from behind him. “Mrs. Grogan, please. It’s not what you think”

Caibre repressed a smile at the sight of her mussed hair and kiss-swollen lips. No one would believe her.

“Hmpf.” The housekeeper gave him a look full of menace. He’d seen kinder gazes in the eyes of gunmen determined to kill him.

“You’ve no need to tell the baron anything, Mrs. Grogan,” Caibre said. “I’ll be speaking with him myself at the first opportunity.” He’d not been looking for a wife, and given their past, Aisla might not be the best choice. Honor required they marry; nothing else mattered. He’d do his best to make her happy whether they loved each other or not.

Aisla pulled on his arm, and he turned to her. “You’ll not talk to Steafan. Nor will you, Mrs. Grogan. I will take care of this as I have everything at Dungarob for years.”

Her tone was fierce, but Caibre could see wild panic in her eyes. He wished he could soothe her anxiety but could do nothing until he spoke with Steafan MacKai. “Don’t worry.” He reached out to stroke her hair. “I’ll make everything right.”

“There is nothing to be made right.” She squared her shoulders, banking the panic he’d seen.