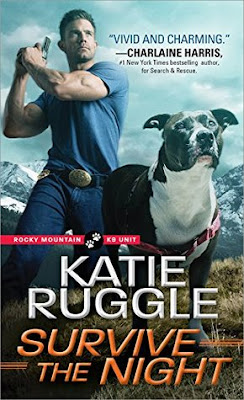 He's always been a haven:
For the lost. The sick. The injured.
But when a hunted woman takes shelter in his arms, this gentle giant swears he'll do more than heal her battered spirit―he'll defend her with his life.

K9 Officer Otto Gunnersen always had a soft spot for anyone in need. As Monroe's very own Dr. Doolittle, he dedicates himself to rehabilitating the injured souls that cross his path―but for all his big heart, he's never been in love.

Until he meets Sarah Clifton's haunted eyes. Until he realizes he'll do anything to save her.

All Sarah wants is to escape a life caught between ambitious crime families, but there's no outrunning her past. Her power-mad brother would hunt her to the ends of the earth...but he'd never expect Sarah to fight back. With Otto and the whole of Monroe, Colorado by her side, Sarah's finally ready to face whatever comes her way.

It's time to take a stand.

Survive the Night by Katie Ruggle
My rating: 5 of 5 stars

Survive the Night features Otto, a tall silent type, and another of Theo’s partners from books 1 & 2. He loves animals and is completely devoted to helping his family and friends. When Jules and her family take in another occupant, Otto, who’s never been in love, falls head-over-heals. He knows Sarah is the one for him and when duty calls, he’s right there to answer.

Sarah is the sister of a crime boss. When she has the chance to escape, Sarah become part of the large family in the rundown house in a small Colorado town. Knowing her brother will scour the ends of the earth to find her, she is constantly on guard. Sarah also discovers that there are people in this world who will fight with her and for her against those who come calling.

Survive the Night is the most anxiety-filled story in this series so far. I enjoyed the content, the pacing, characters, and world building. There is wonderful character development. The dynamics between the three cops in the series are wonderful. They truly are brothers in all ways that matter whether they are sporting the uniform or not. Jules and her family accepted Sarah immediately and she became one of the family.

There is continued character development in Survive the Night with both the new character and everyone we met in previous books. I was able to feel the emotions of the characters - Sarah becoming accustomed to her new home, anxiety surrounding being found by her brother or his associates, Otto’s feelings for Sarah, and the continued build-up of Jules’ situation. The world-building also allows for clear visualization of the story as I read along. I enjoyed another action and emotion-filled novel by Katie Ruggle.