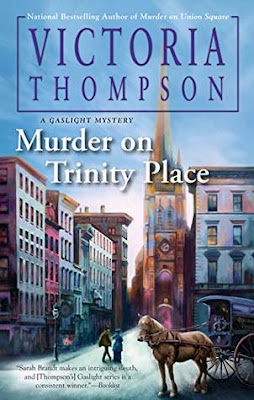 The devil's in the details when a man is found murdered near Trinity Church in the latest installment of the national bestselling Gaslight Mystery series...

The year of 1899 is drawing to a close. Frank and Sarah Malloy are getting ready to celebrate the New Year at Trinity Church when they notice Mr. Pritchard, a relative of their neighbor's behaving oddly and annoying the other revelers. Frank tries to convince Pritchard to return home with them, but the man refuses and Frank loses him in the crowd. The next morning Sarah and Frank are horrified to learn Pritchard was murdered sometime in the night, his body left on Trinity Place, the side street near the church.

The police aren't too interested in the murder, and the family are concerned that the circumstances of the death will reflect badly on Pritchard's reputation. To protect the family from scandal, Nelson asks Frank to investigate. Frank and Sarah delve into Pritchard's past and realize there may have been a deadly side to the dawning of the new century.

Murder on Trinity Place by Victoria Thompson
My rating: 4 of 5 stars

This is the first Gaslight Mystery I've had the chance to read. I don't usually start a series from anywhere but the beginning because I don't like to miss out on world building and character development. I can say, however, that not having read the previous 21 books didn't detract from the story. There were a few things referenced that were unfamiliar to me but in no way caused me to be confused or lack understanding of the current goings-on in the book.

I enjoyed the story and found the mystery behind a local dairy owner's death to be interesting and full of twists and turns. The author provides insight into interesting American turn-of-the-century events, customs, and what was considered traditional occurrences during the time period. She tosses in mentions about the “swill milk” scandal that took the lives of thousands of babies and the cows forced to eat the swill.

The author provided several plausible suspects and I found it enjoyable trying to figure out who the culprit was as I read along. The path taken to solve the murder of Mr. Prichard is filled with interesting characters, hidden agendas, lies, deceit, and sadness. I was constantly on edge as Frank Malloy and Gino Donatelli investigated the Murder on Trinity Place.

I did find a few sections of the dialogue awkward – not embarrassing or the like, but not smooth or conversational. Additionally, some of the paragraph, section, and chapter endings were abrupt. These issues didn’t detract from the mystery, the side stories, or the overall enjoyment of the book.
Will I go back and start this series from the beginning? Absolutely. I enjoyed Murder on Trinity Place and look forward to properly meeting Sarah, Frank, and the rest of the cast.

I was given a hardcover copy of this book to read.