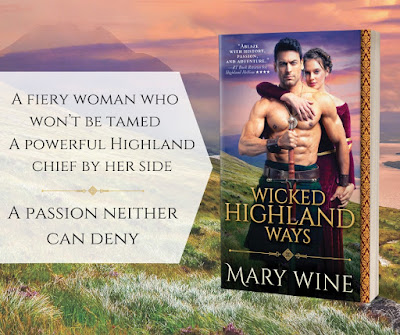 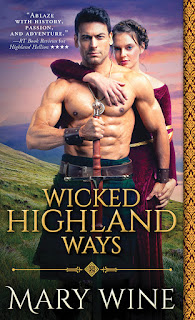 Brenda Grant has no desire to marry. Ever since her first, horrible marriage she's made herself into a hellion of a woman to keep men from wanting her. But the Campbells, her previous husband's family, are determined to find her a new husband.

Highland Chief Bothan Gunn is smitten by the woman who won't be tamed. It takes all Brenda's willpower to resist the brawny Highlander who takes her to safety. But as they spend time together—and grow ever closer—Brenda finally finds the freedom she's been longing for all along.

Chief Bothan Gunn pulled his horse to a halt. He reached forward to rub its neck as he contemplated the view before him.

Maddox, his captain, came up beside him, tilting his head to one side as he waited to see why Bothan had stopped. Both of them peered at the land in front of them, the place where Scotland ended and England began.

“I never thought to lay eyes on that,” Maddox declared when Bothan remained silent. His voice drew out the last word, making it clear Maddox cared little for the place they were heading.

Bothan turned to look at him. “Or cross into it.”

Before them were the borderlands. England lay on the other side of them. He didn’t belong there, but Bothan set his stallion into motion because Brenda Grant wasn’t suited to England any more than he was.

And he was going to ensure she could remain unbridled by those who didn’t understand the value of a woman with the spark of life burning in her. Let the English keep their wives in submissive obedience. He craved a wife who would singe him with her heat and give him children with the strength to rise up to the challenge of living in the Highlands.

Brenda was that woman.

She would spit in his eye though. At least until he proved his worth to her.

He slowly grinned as he contemplated the battle ahead.

It was a fact; he was going to enjoy it.

And so would Brenda.

Of course, first he had to rescue her. His lips curved into a grin. At last there was something pleasing about his journey into England. Snatching a prize from the hands of the English—well, there was something he would enjoy full well. They told tales in England of wild savages such as himself.

Not that he was planning on changing the way the English thought about him.

No, he was riding onto their land to retrieve the woman he craved. Any who stepped between them was going to discover he was tenfold worse than any story they had ever heard.

5 Copies of Between a Highlander and a Hard Place
a Rafflecopter giveaway
at 7:00 AM