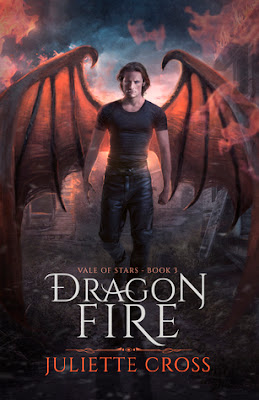 He'd burn the whole world to keep her safe.

Wounded, with a target still on his back, Kieren Moonring has been hiding in the last place his Morgon enemies might find him. In the human convent on the southern shores of Primus, his body heals quickly, but his soul is broken.

While Sister Liana tends to the recovering Morgon man hiding in their convent, she can't stop or disguise her growing attraction. What disturbs her more is that he begins to uncover her past that is best kept buried.

Kieren fears his old enemies will find him, and then Liana. When his greatest fear comes true and she becomes their next mark...bloody hell, if he won’t murder the whole world to keep her safe.

Dragon Fire by Juliette Cross
My rating: 5 of 5 stars

After wounded in battle saving Kol’s mate, Moira, Kieren Moonring is sequestered in a convent of human nuns. The last place enemies and allies would think to look for him, Kieren heals his broken body while fighting the demons in his mind. Luckily for him, one nun keeps his mind off those hunting for him, even if only for a minute.

Sister Lilian is fascinated by the Morgon man taking refuge in their protected convent. Uncomfortable with her growing attraction to Kieren, she’s even more uncomfortable with him discovering her less than honorable past. She has secrets that no one would understand.

When Kieren’s enemies come knocking on the convent door, he’s forced to flee, making sure to take the one thing with him he wants and needs the most….Liana. Thrust into the Morgon world, and what that means for a human, scares Liana but losing Kieren terrifies her. Together they must figure out who in the Morgan court is betraying them to the enemy before anyone else is kidnapped or killed.

Holy cows is Juliette Cross a master at writing dragon romances – actually, anything she’s written, really. I love all her books. They are filled with passion, realism, and chemistry. I was engaged from the start and couldn’t put the book down. Her ability to create paranormal stories with romance, action and a solid plot is what keeps me coming back.

I enjoyed the slow-burn between Kieren and Liana. The story is fast-paced but not so fast you miss things or events seem rushed. The continued tie-in to Blood King Larkos and his evil intent kept me on the edge of my seat as the Morgons and their beloved humans strive to free those captured and end the reign of the Blood King. The ending of this book has me eagerly waiting to see where we go in book 4.