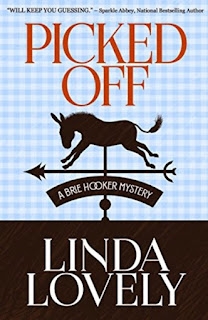 Udderly Kidding Dairy is hosting a campaign fundraiser for Eva’s best friend, who hopes to be South Carolina’s next governor. The candidate’s son, a pro quarterback, is flying home for the wingding.
And Brie’s eager to get a close-up view of the cute tush she’s admired on TV, even though she’s reluctantly sworn off even more tempting local beefcake.

The campaign fundraiser promises to be a huge success until a pitchfork attack turns the goat farm into a crime scene—again. To protect her friends, Brie puts her sleuthing skills to work. Will she live long enough to find out who’s behind a vicious assault, a kidnapping, blackmail, and murder?

Picked Off by Linda Lovely
My rating: 5 of 5 stars

Picked Off is another intense, edge-of-your-seat cozy mystery set in the world of a vegan working her family’s goat dairy farm. The South Caroline world of Brie Hooker created by Linda Lovely is spectacularly written and the images of each scene in the book were not only vivid but easy to get immersed in as you read. The world and characters were written well, and I felt like I was there at the farm, on the climbing trails, or in the middle of the scuffles.

Brie’s character is down-to-earth, enjoyable, and a completely likable character. It is no wonder she has two suitors vying for her attention and affection. Paint and Andy, men on complete opposite ends of the spectrum, are well-written and caring, each wanting Brie for themselves. Aunt Eva is a quirky yet strong woman who demonstrates the ability to be independent and self-sufficient. Brie’s friend Mollye (yes, it ends with an “e”) rounds out the character list quite nicely.

Regarding Brie’s love life, the author developed an unusual relationship status for her. The direction the author is taking Brie's potential love-match is different from most relationships in books and found that I enjoyed the differentiation. Regardless of the outcome, I like both guys, so I am not really rooting for one over the other. I would be fine with whatever direction the author takes. Well, maybe that's not true. If I were to pick, I would pick Paint, but I like a little bit of bad boy in my men.

The author did a wonderful job weaving everything in this book together. The book contains attempted murder, disappearances, and a tangled web of one disaster after another, carefully explained, envisioned, and played out. Add those elements to simmering romances, secrets, a vegan working on a dairy farm, and one unpredictable mule and you have one spectacular tale in Picked Off. The plot is solid, and I didn't see the conclusion coming. There were several suspects to choose from and the correct one was camouflaged quite well. Picked Off is a great novel that drew me in, kept me engaged, and continued to pique my curiosity from the very beginning. I can't wait to see where Linda Lovely takes Brie, Eva, and the rest of the cast in the next book.