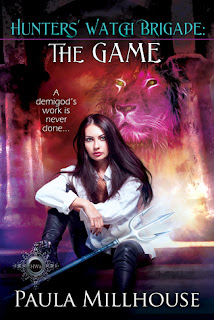 All monster hunter Samantha Silverton wants is a little R&R. She and her sexy partner/cat shifter Max have a week off in the city that never sleeps, and she intends to enjoy it. But before she can pack her suitcase, she’s caught up in the middle of a wicked game—a smartphone app driven scavenger hunt that’s bringing all the big, bad supernaturals to NYC to play. The bad part? The game was the brainchild of Alex Van Dam—Sam’s first love. What’s worse? Sam will have to play the game alone.

Maximillion Ra hasn’t quite got a handle on his unique shifter magic yet. He’s in love with Sam, but if he’s ever going to be any good to her, he has to face his family’s curse. But how can he leave Sam now, especially with her old flame in the picture?

Alex Van Dam isn’t interested in who wins his game. He just wants to find the final prize—an ancient Greek relic. Once he has it, he’ll use the artifact’s magic to control all the supernaturals in Manhattan, starting with the Hunters’ Watch Brigade.

Only Sam stands in his way. And without Max by her side, even the monster hunting daughter of Poseidon has to wonder if she stands a chance . . .

The Game by Paula Millhouse
My rating: 4 of 5 stars

Just like Initiation, book 1, The Game is a fun book filled with mythological creatures, action, and a bit of romance. I enjoyed all of the elements that the author wove together. Part witch and the daughter of Poseidon, Samantha is part of the Hunters’ Watch Brigade, a group of monster hunters who protect humans from the supernatural creatures who go rogue. Sam is sassy, independent, strong, and maybe a touch too stubborn. Sam has a penchant for killing first and then trying to ask questions, much to the dissatisfaction of Shade, her boss.

Max is her Main Coon familiar with a toolbox of skills. Since his shift from familiar to guardian, Max and Sam’s relationship has switched from one of witch and familiar to one of heat and romance. Off to get a week’s work of rest and recreation, Sam and Max are disrupted, however, when evil bombards the city in the manor of a scavenger hunt app.

The app brings a lot of monsters into town, including Alex, Sam’s ex. His desire? To find an ancient Greek relic that will afford him control over all the witches. In order to keep the city safe, the vacation is cancelled as Sam hunts Alex and the all-to-powerful relic alone, after Max is sent to deal with is family’s curse before it’s too late.

Danger abounds as tries to get ahead of Alex and retrieve the relic herself. Having it get into Alex’s hands will put the entire world in danger, not just the witches he will be able to control. It’s a good thing Sam has a shifter protector, a vampire, and Poseidon in her back pocket. She’s going to need them.

The author is very creative with the contents in The Game. The characters are interesting and well-developed. There is continued world building and I was able to visualize the story. The magical trident Sam carries with her at all times is wicked awesome. The story is fast-paced, flows well, and kept me engaged. The Game is an excellent book.