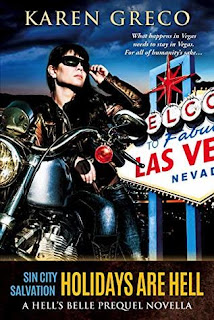 There are thousands of bodies buried in the Las Vegas desert. Nina Martinez does not want to be one of them.

Blood Ops agents Nina and Frankie came to Las Vegas for a little R&R. But their holiday takes a detour when there is a mass suicide on the Vegas strip. With the sigil of Satan burning on the bodies, what looks like a human problem quickly turns supernatural. Satan is in Sin City, and he’s been reinvented as the self-help guru behind the multi-billion-dollar organization BestLife Ministries.

With an offer to attend the BestLife’s Yule Ball, Nina accepts her invitation to dance with the devil. But what happens in Vegas needs to stay in Vegas. For all of humanity’s sake…

This action-packed prequel novella to the acclaimed Hell’s Belle series gives fans of the series a glimpse at Nina’s origin story while new readers can sample the unique Hell’s Belle world.

Sin City Salvation has Nina and Frankie on a mini vacation. As Blood Ops enforcers, they are in desperate need of a break from killing rogue vamps and other things that go bump in the night. When they are walking the Strip in Vegas, they witness a jumper plummet to his death; one of many suicides that have been happening all over the city. To add to the problem, this body also carries the sigil of Satan, meaning this epidemic of suicides has not just gone from a human problem to a Blood Ops problem.

Nina and Frankie are outed as Blood Ops by Satan’s son, Gabe, who seeks Nina out. It would appear that Daddy Dearest is on earth under the guise of a self-help master of BestLife Ministries. His followers are devoted and react to powers of suggestion – even if it gets them killed. When Gage invites Nina to the BestLife Yule Ball, she, Frankie and the leader of Black Ops develop a plan to send Satan back where he belongs. Only, Nina and Frankie are demonologists, so Satan’s banishment won’t be easy or long-term.

Sin City Salvation is an action-packed prequel to the Hell’s Belle series. Nina is a strong heroine who just happens to be half-vamp/half-human. The author does a good job reminding the readers that Nina is human. She’s not a full vampire and she has reactions to situations that show her humanity. I really like Frankie’s character. He’s protective but knows Nina can handle herself. Frankie exhibits some human-like qualities that make it easy relate to him even though he’s undead. The snark and banter between Nina and Frankie is laugh out loud worthy and lightens the intense nature of the story.

The path the story takes had me totally on board then the author put in a plot twist. The twist was something I had tossed around as being possible but disregarded it as I continued reading. The author did a wonderful job with misdirection and pulling out the plot twist at the perfect time. I enjoyed the story, the pacing, the characters, and the world building. I own all of the other full-length novels in the series but haven’t had time to read them. This prequel was exactly what I needed to pull me into the world of Hell’s Belle.