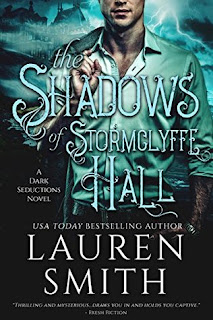 
Bastian, infamous playboy and the current Earl of Weymouth doesn't believe his English castle is haunted. So what if a few windows and lightbulbs shatter? That happens. OK, bleeding portraits are hard to explain… But he is not going to be deterred. Not even by Jane, a seductive-as-sin grad student who has assigned herself the task of ghost hunting at Stormclyffe Hall. All Bastian wants is to restore his ancestral home, not be distracted by her curvy hips, bedroom eyes and gorgeous smile-

Fine, maybe he does want to get naked with Ms. GhostBuster, but that's only because she practically follows him around, nosing into his daily life. And yes, because she looks so damnably sexy, however, he refuses to give into lust. No matter how much she tempts him.

But when the ghosts up the ante and try to kill them, Bastian realizes he will have to keep Jane close. Very, very close. Purely to protect her, of course.

At least that's what he tells himself. All bets-and some clothes-are off, as he shows her what a real earl is made of.

*This book was previously published in 2014 by Entangled Publishing and has been re-released.

The Shadows of Stormclyffe Hall by Lauren Smith
My rating: 4 of 5 stars

The Shadows of Stormclyffe Hall is a paranormal gothic romance set in England. The 1811 prologue provides insight into the tragic past of Stormclyffe Hall. The Earl married a local without any pedigree and shortly after the birth of their son, Edward, she plummets to her death on the cliffs. In present day, Jane Seyton is doing her dissertation on tragedies that occurred in some Britain’s oldest castles. Her current destination is Stormclyffe Hall. Jane is certain something else happened at Stormclyffe Hall all those years ago that goes beyond a new mother tossing herself off of the cliffs. She needs to get into Stormclyffe Hall but the current Earl, Bastian, intends to make things difficult.

As Jane continues to research the castle and investigate the former occupants, both she and Bastian soon realize there is something otherworldly in play. There is evil threaded through the castle and has its sights set on Jane and Bastian. Now, the annoying American and arrogant Earl must come together to battle supernatural entities before more people die.

The story is dark, romantic, and mysterious. Throughout the book, the chemistry between Jane and Bastian intensifies, realistically and believable. The author did a great job with the development of each character. The unfolding of the story is perfectly paced and well-developed. The world-building is done is done so well that the reader will feel like they are actually in the story. Descriptive and exciting, The Shadows of Stormclyffe Hall is engaging, rich in detail, and highly recommended.

I was given a copy of this book to review (both the original publication in 2014 and the re-release in 2018).