It’s never just another day at the office . . . 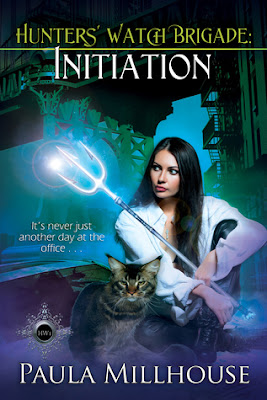 Demigod Samantha Silverton, a full-time monster hunter in the Hunters’ Watch Brigade, is on a mission with her familiar, Max, to hunt down a scorned mermaid when she finds out she has bigger fish to fry. Her mother—a powerful witch—has been abducted. And the most likely villain is her mother’s enemy, Francesca Rosencratz.

Being a familiar to a sexy monster hunter has its perks, but Max wants more. He might look like a cat, but he’s also Sam’s best friend . . . and the man who loves her. But in order to defeat Francesca, he’ll have to shift into his human form, something he’s avoided. Because once he’s officially a shifter, he’ll have to join the Brigade. And that could take him away from Sam for good.

But Francesca’s becoming increasingly dangerous. She and a mysterious ally are working to take down the Brigade, and take over the paranormal community. Sam will have to dig deep if she’s going to save her mom. But Max will have to risk even more . . . to save Sam.

Initiation by Paula Millhouse
My rating: 4 of 5 stars

Initiation is a fun book filled with mythological creatures, action, and a bit of romance. I enjoyed all of the elements that the author wove together. Part witch and the daughter of Poseidon, Samantha is part of the Hunters’ Watch Brigade, a group of monster hunters who protect humans from the supernatural creatures who go rogue. Sam is sassy, independent, strong, and maybe a touch too stubborn. Sam has a penchant for killing first and then trying to ask questions, much to the dissatisfaction of Shade, her boss.

Max is her Main Coon familiar with a toolbox of skills. He also has a secret that could change his relationship with Sam. He could shift to become her guardian but he’s afraid of being taken away from Sam. Shade knows the secret though and pushes him to shift. The relationship between Sam and Max becomes awkward at times and didn’t really flow smoothly. Sam should have been really mad that her cat, her trusted companion, was really a shifter. Max was enjoyable enough, just the cat to human to a relationship with Sam part was rather quick and without enough turmoil.

Shade is an awesome character. He’s the vampire leader of the Hunters’ Watch Brigade. The banter between Sam and Shade is entertaining and I really thought they should have been the power couple of the book. Don’t get me wrong, Sam and Max are fine as a couple, but I love the dynamics between Sam and Slade.

The search for Sam’s mother takes the team all over trying to protect humans while trying to figure out what Francesca, her mother’s kidnapper, has planned. Danger abounds as Sam navigates her new love life and mounts a rescue for her mom. It’s a good thing Sam has a shifter protector, a vampire, and Poseidon in her back pocket. She’s going to need them.

The author is very creative with the contents of Initiation. The characters are interesting and well-developed. The world building is well-done, and I was able to visualize the story. The magical trident Sam carries with her at all times is wicked awesome. The story is fast-paced, flows well, and kept me engaged.