This post is part of a virtual book tour organized by Goddess Fish Promotions. Bharat Krishnan will be awarding a $15 Amazon/BN GC to a randomly drawn winner via rafflecopter during the tour. Click on the tour banner to see the other stops on the tour. 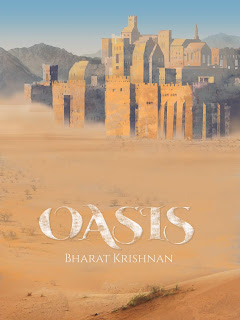 Once, there was a truce. Desperaux controlled the west with magic, and Desire claimed the east with steel and science.


But now magic has disappeared, and the world has changed.

The kingdom of Desire will stop at nothing to maintain the new world order. On Juno’s wedding day, their Mengery soldiers came marching through the Nine desert to rip his world apart. Now he journeys east with his adopted brother, Trey, in search of revenge after the murder of his family. Along the way, the two face bandits and the magical creatures of the Nine. When they finally reach Desire, Juno and Trey will face something even deadlier – their own fears and ambitions.

This is a tale of brotherhood, a revenge story that will remind you that everything has a cost – a cost that will be paid to Desire and to the inner demons that govern us all.

Read an Excerpt from Oasis:

Lee thought this seemed like a lot of effort over the stealing of some fruit. Although, he guessed the Mengery were mad he blew up the marketplace in the process. Using the special shoes Asha had given him before he left the Silo, he jumped backwards out of reach of a Mengery’s daga.

“You’ll have to catch me if you want to dance, big boy!”

He jumped away, turning his osmosis shoes on mid-leap so a spurt of water from their bottoms propelled him to the top of a building. The beams of laser shot from their guns were so hot they caused the water in his shoes to evaporate. If there was one thing the resistance needed, it was guns. And food. And water. A place to sleep. Maybe some TV.

As Mengery on the ground shot at him with pistols, another two set a wooden ladder against the building and started climbing up. Lee took a bite out of his apple before throwing it at the armored man scowling at him.

“You are one bad apple.”

The fruit landed hard against the ladder, toppling it over and sending the two guards crashing down. Propelling himself to an adjacent building, he crashed through a window as his fuel gage read empty. His shoes needed water. The resistance could definitely use water. 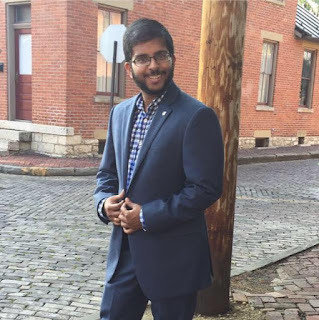 Bharat Krishnan is a philanthropic consultant in Columbus, Ohio. After ten years in Democratic politics, he wrote a memoir about his life on the road as a political campaign manager and just released a fantasy novel called Oasis. He refers to himself as a professional storyteller and amateur cook.