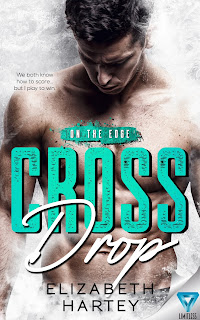 I’m not a saint. Never claimed to be. I’ve played the game and scored my fair share—both on and off the field. This is why I should have known better than to fall for a hockey player. But I did. I fell fast and hard.

Now I’m left with the painful consequences, reminded every day of how reckless I had been by giving him my heart so easily—so willingly. Dalt broke me in the cruelest of ways, and because of him I’ll never be able to love again.

Nikki changed me. She made me want to be a better man. My days playing off the field were over because she owned every little piece of my heart…until she left, leaving behind a gnawing ache where my heart used to be.

Now she’s back, and it’s painfully clear she hates me, ignoring me, pretending like I’m nobody to her. But that’s just too damn bad. I want answers. I want a goddamn explanation.

And most of all…I want her.

And he knows just how to use all his perfection to get what he wants. He’s not accustomed to hearing the word no, at least not from any oxygen breathing female. He’s using his locked and loaded molten gaze at this very moment, turning my bones to Jell-O and annihilating any wise decision-making on my part.

I want him so bad it hurts. It’s like staring at the shiny, poison apple, knowing if you taste it you’re doomed, but unable to resist its shimmering perfection. There’s more than just my heart to consider now, though. We have a lifelong connection he’s not aware of. Nevertheless, I have to disconnect my feelings for him. The man I fell in love with is not the man he turned out to be. He made his choice. He doesn’t get to have his cake and eat it too, even with those gifted lips.

*Disclaimer: I have not read Cross Stroke, book 1. Upon completion of Cross Drop, I don't feel that I needed to read book 1, however, I have added it to my to be read list.

Cross Drop is a second chance at romance novel. Dalt is a rick hockey player - Nikki a soccer player from a different social class. Neither care too much about where each other comes from, it doesn't really matter. They are too busy enjoying each other in ways that neither have enjoyed when dating others prior. Then, out of the blue with no explanation or reason, Nikki disappears. When she reappears over a year later, the passion they had is still there, simmering. Dalt doesn't understand why she left him without a word and Nikki can't believe that he made the choices he made. What happened all those months ago destroyed what they had begun building.

The only bad (and I use that term loosely) thing I can say about the book is that just about every aspect of the book was predictable. As the scenes were set up I knew exactly what was going to happen next. But, that didn't make Cross Drop any less enjoyable for me. I was engaged in the story from the beginning and the author did a great job keeping me interested. I still think about the book now and I finished it over a week ago.

Nikki and Dalt are wonderful characters; flawed but perfect for each other. The chemistry between Nikki and Dalt is electric and sizzles off of the pages. They are drawn to each like a moth to a flame at the beginning of the book and even after Nikki returns. The problem between them is that each remembers the time period when Nikki left a lot different than the other. And when everything comes out? Oh, my. Heart-wrenching revelations rock both of their worlds.

The author did a great job with this new adult contemporary romance. The entire story was written with realism. There are a couple deeply moving and emotional parts that had me sniffling. There was great character development and I was able to connect to both Nikki and Dalt. The world building was done well and I was able to visualize the story in my head.

As a lover of the northeast US, Elizabeth moved with her husband to the Poconos several years ago to open a Chiropractic Clinic. Four children and a menagerie of animals later, she has finally found time to fulfill her lifelong dream of writing novels. The wild ride of writing books is one of the most difficult things she’s ever done in her life. But the opportunity to get her stories out of her head and down on paper and send them out into the world is also one of the most wonderful things she’s ever done. A dreamer at heart, romance is the genre she spends most of her time writing and reading into the wee hours of the morning. And having readers fall in love with her characters as much as she does is almost as exciting as giving birth (just not as painful!) When not juggling work responsibilities and writing, she enjoys spending time with her family, hiking the beautiful hills and woods around her home, swimming, knitting, watching old classic movies and travelling.

Elizabeth Hartey will award a $20 Amazon or BN GC to one randomly drawn winner via rafflecopter during the tour.