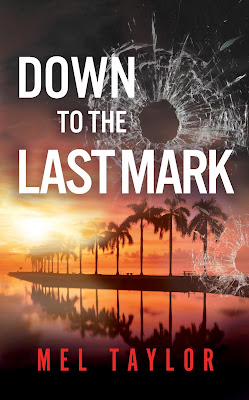 Down To The Last Mark
Mel Taylor

Kinnie Mason harbors a craving, even though she knows it’ at the cost of her singing career, her music and maybe her life. She is thrust into the crosshairs of hitman. Private investigator Frank Tower is hired to protect her, yet her actions could put both of them in jeopardy.

Kinnie Mason dangled one foot over the edge and smiled. She looked out at the water before her, raised her arms and showed her palms to the moon. A whisper of a breeze moved over the ocean, toward Mason, building in intensity, until the zephyr became a gust. She smiled and swiped at her hair, pushing the strands away from a sweaty brow. The quick movement almost sent her over. Mason was standing on the penthouse balcony ledge on the twenty-fifth floor of the Stilton Bay Hotel.

“I can fly,” she shouted. “I can fly and watch over my dominion. I am the powerful Kinnie Mason!” She never looked down at the moving dots of people and cars twenty-five floors below her. To her, the park across the street and the office buildings below, all looked like a vast new world, made up of glass, trees, and lights. Her world. She was pleased and held out her arms over the valley as if to grant welcome to everyone below.

The ledge was one foot wide, made of cement, and firm enough to stand on. Her legs were spread apart, arms wide, allowing the wind to caress her every curve and exposed nipples. “I can fly and breathe fire stronger than a dragon.” Her nostrils flared, the pupils of her eyes were tiny. Kinnie’s arms waved in the breeze, head lifted slightly upward. To Mason, the streets were her kingdom, ripe with gifts of fruit-bearing trees and gold bricked pathways, all leading to the cobalt ripples of the Atlantic Ocean.

Mason looked down and again slowly dangled one foot over the edge. She was now standing on just her left foot, figuring out how to master this task of flying. She yelled, “All who have business before me, kneel and beg for my attention.”

A dark feathered buzzard gave her a passive glance and glided past her. She stared at the bird and paused, as if the flying creature was attempting to speak. The bird disappeared on the night sky, yet she could still hear a command being directed at her. Someone was trying to curry the favor of Queen Mason, trying to divert her energy away from the goal of becoming airborne.

Who would dare approach me unannounced?

Mason tried to ignore the sound. Her full attention was on the kingdom below and soaring above the hovels beneath her.

There, she heard it again. “Go away,” she screamed. “Or you will face my wrath.” “Kinnie, please come down.” Then, “you’ll hurt your voice.”

There was too much to be accomplished and the words went by her without an acknowledgment. She reasoned the future of the kingdom was at stake. Mason took a step to her right and felt the wind on her bare breasts. The time to fly was now. Don’t wait.

“Kinnie, don’t move. Please come down.” The voice was much louder now and seemed closer.

“Who approaches me?” Mason spoke over her shoulder, her eyes fixed on the horizon of the charcoal sky and the flat surface of the water. “Who has the nerve to go near the queen.”

“Kinnie, er, your majesty, please let me approach. I have important news from the other side of the valley.”

She thought about the words and turned to meet the speaker. The voice sounded familiar. He was wearing a blue business suit, white shirt, opened, with striped tie, now pulled out of its knot. He used his hand to swipe a bald head. His hand shook and he looked panicked.

“Kinnie, please come down,” he said again. “Just as soon as I return from my flight.”

His jaw twisted into a look of frustration and worry. She was standing there on one foot, poised as if to jump at any second. He tried to make his voice sound confident. “You can’t fly just yet. There are thousands of your citizens waiting for you. Please, let me escort you. Your presence is required, your majesty.” He stepped forward and extended a hand up to her.

She thought about the request. “Thousands?” “Thousands.”

“Thousands. They are all waiting for you right now. Please, let me help you into the royal robes.” Just a few more inches and he would be touching her fingertips. He inched forward, his fingers out. He held his breath. She now had both feet down on the ledge, reached down and made contact.

In one quick motion, Barry Ruddup managed to pull Kinnie Mason down from the ledge. She collapsed on him and immediately fell into a deep sleep. Ruddup slid his arms under her and picked her up, carrying her back inside the hotel room. He held her for a moment, cradled against him like a bird with a broken wing.

Once she was secure on the couch, he went to the bedroom, snatched up a robe and placed the garment on her. For the first time since he entered the room, he took in a deep breath.

He went back and closed the balcony door. Ruddup looked around for what he should do next. He leaned in close, and made sure she was still breathing.

There was a knock at the door. Ruddup went to answer, never taking his eyes off Kinnie. He opened the door to Jackie Tower.

Jackie’s eyes were tiny beads under heavy rows of bent brow lines. “Where’d you find her?”

“On the balcony, trying to fly.” There was a flatness to his voice, as though he had tried and failed on many other occasions to help her.Ruddup had a habit of making sure to memorize all faces coming into his life. He studied Jackie, recording in his memory the cut above her left eye, the slight puffiness under both eyes that Ruddup assumed would never ever go away. There was a don’t-mess-with-me determination in her gait, as though the world stopped being kind to her years ago and she was forcing herself to show a modicum of kindness.

Jackie took her thumbs and gently exposed the brown eyes of Kinnie Mason. “I’m not the doctor…”

“You’re the drug rehab expert-” He cut her off.

“Yeah but, I need a doctor to confirm but it sounds like she’s on PCP. And from the looks of it, a whole bunch of other stuff. Opioids.”

“Well, do what you can. She’s supposed to be on a stage performing in twenty minutes.”

“Do you know what the promoters will do to us?”

“Mister, the only performance she’s going to be doing is in the bed, shaking this off.

Ruddup stood there, his eyes scanning the room, checking the time, jaw twitching, as if he was figuring out the next move. “What’s the name of your place again?”

“The Never Too Late,” Jackie sighed. “You’re not thinking about taking her there?” “I can’t and won’t check her into a hospital. Too many freakin’ photographers. She’s supposed to be clean. Just got out of rehab.” “Not my rehab.”

“No, out west.” He had the look of a man with a plan. “I’ll tell the reporters she’s gone out of town. I’ll call for two cabs. I have a woman on staff who looks like Mason, have her wear her clothes and get into a cab. Once they’re gone, we’ll take her to your place.”

“I don’t like this idea. My clients are skittish already. If someone finds out, I’ll be mobbed.”

Ruddup reached back, like he was going for his wallet. “They won’t find out. I really need your help. Money is not an option. We’ll pay triple the normal.”

The wrinkles in Jackie’s brow smashed into one solid worry line. Jackie said, “Under one condition.”

“She goes the second, and I mean the second anyone finds out and shows up with a camera.”

“Deal. I’ll get everything started. And thanks.”

He looked down at Kinnie Mason and pride filled his chest. “Five gold albums,” he started. “Three platinum, seventeen weeks with one hit at the top of the charts, and five years of sold out concerts. But she hasn’t performed in more than a year. This was going to be her return concert. The only thing stopping her, is herself.

Kinnie opened her eyes for just a moment and reached out her right hand, directing it by memory toward the drawer in the night stand. Her fingers pulled open the drawer and pulled out a bottle of top class Vodka. Before she could work on opening the top, Jackie pulled the bottle out of her hands.

The bottle was eased down on the soft carpet. Jackie looked at Ruddup. “We’ve got a lot of work to do.”

Mel Taylor uses the sun and bending palm trees of south Florida as a backdrop for his latest thriller. Taylor uses his experience to create characters and story that readers want to explore. An Emmy Award winner, Taylor takes you down the back streets, away from all the tourist spots to present you, the reader with his thrillers. 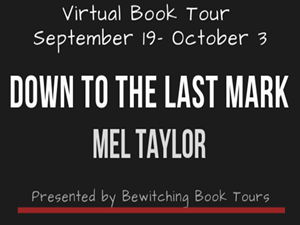