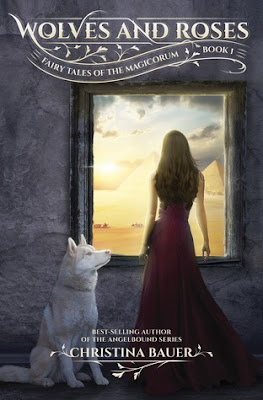 Wolves and Roses by Christina Bauer
My rating: 4 of 5 stars
Amazon

All Bryar wants is to attend a regular high school with normal humans and forget all about shifters, fairies, witches, and the curse that Colonel Mallory the Magnificent placed on her. And she might be able to do just that--if only she can just keep her head down until her eighteenth birthday when the spell that’s ruined her life goes buh-bye.

But that plan gets turned upside down when Bryar Rose meets Knox, the bad boy who’s literally from her dreams. Knox is a powerful werewolf, and his presence in her life changes everything, and not just because he makes her knees turn into Jell-O. If Bryar can’t figure out who—or what—she really is, it might cost both her and Knox their lives… as well as jeopardize the very nature of magic itself.

Wolves and Roses is a unique young adult series based loosely on fairytales. Bryar Rose is a member of the Magicorum because of her heritage as either a shifter, fairy, or witch. The Magicorum follow templates of certain fairytales. Bryar’s just happens to be Sleeping Beauty, except she’s not the Sleeping Beauty type nor is she one to follow status quo. She just wants to be a normal human – one that doesn’t fall asleep all the time unless she uses her “special” inhaler. As she gets closer to the age of 18, though, her life becomes all topsy-turvy, she meets Knox, the hot guy from her dreams, and learns that not everything or everyone is as it seems.

I enjoyed Wolves and Roses as a book with somewhat complex themes but nothing so complicated that it became too intense. The book features twists and turns that shake things up but that’s was really made the book stand out to me. There is character development and Bryar and Knox are developed well as the story moves along. There world building was well done and I not only was able to picture the story in my head but I also felt like I was part of what was going on. I’m glad I had a chance to read this unusual paranormal novel.